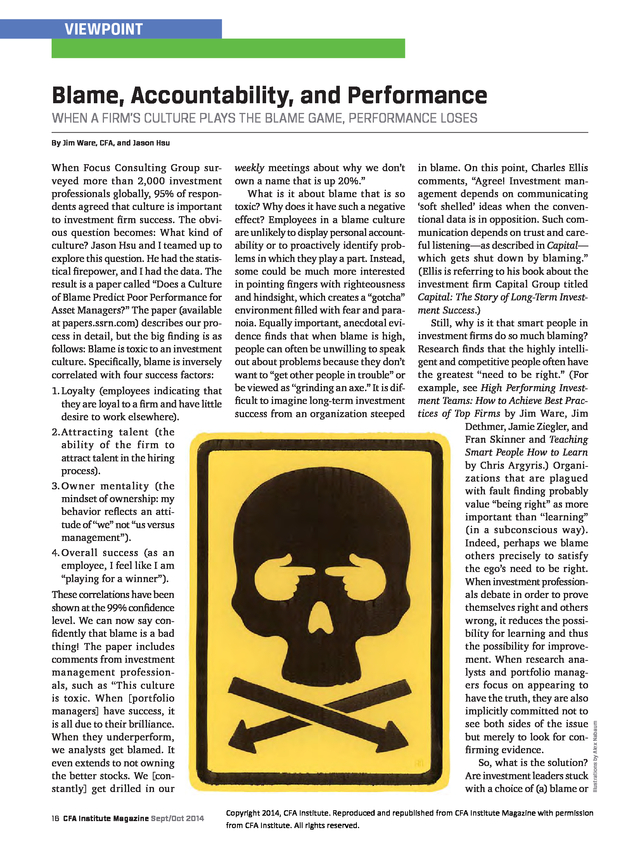 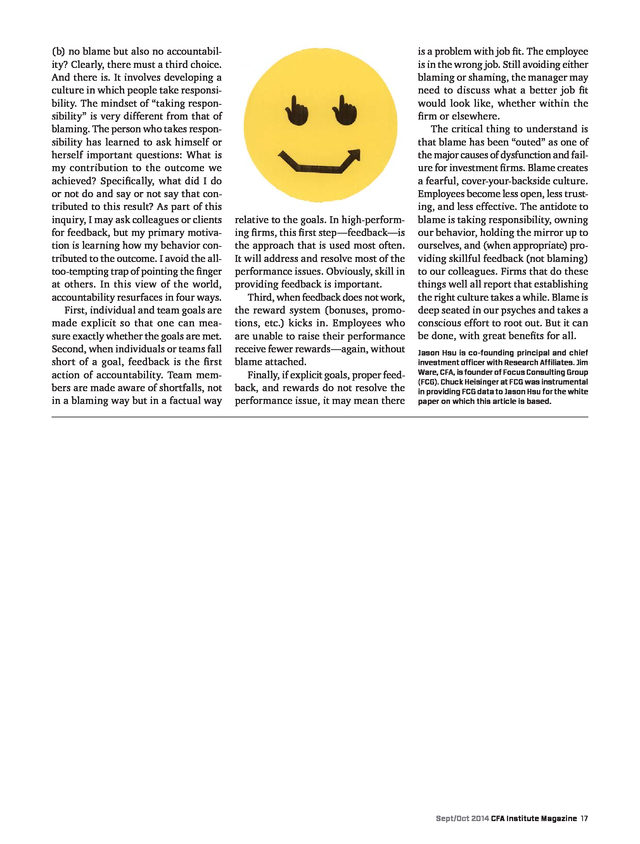 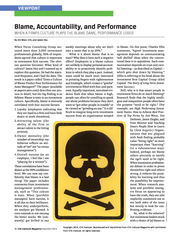 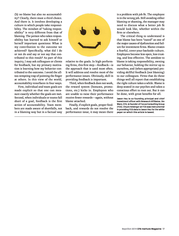 1
1 of 2
Blame, Accountability, and Performance

1) VIEWPOINT Blame, Accountability, and Performance WHEN A FIRM&rsquo;S CULTURE PLAYS THE BLAME GAME, PERFORMANCE LOSES By Jim Ware, CFA, and Jason Hsu result is a paper called &ldquo;Does a Culture of Blame Predict Poor Performance for Asset Managers?&rdquo; The paper (available at papers.ssrn.com) describes our profollows: Blame is toxic to an investment correlated with four success factors: 1. Loyalty (employees indicating that desire to work elsewhere). 2. Attracting talent (the abilit y of the firm to attract talent in the hiring process). 3. Owner mentality (the mindset of ownership: my tude of &ldquo;we&rdquo; not &ldquo;us versus management&rdquo;). 4. Overall success (as an employee, I feel like I am &ldquo;playing for a winner&rdquo;). These correlations have been level. We can now say conthing! The paper includes comments from investment management professionals, such as &ldquo;This culture is toxic. When [portfolio managers] have success, it is all due to their brilliance. When they underperform, we analysts get blamed. It even extends to not owning the better stocks. We [constantly] get drilled in our 16 CFA Institute Magazine Sept/Oct 2014 weekly meetings about why we don&rsquo;t own a name that is up 20%.&rdquo; What is it about blame that is so toxic? Why does it have such a negative effect? Employees in a blame culture are unlikely to display personal accountability or to proactively identify problems in which they play a part. Instead, some could be much more interested in blame. On this point, Charles Ellis comments, &ldquo;Agree! Investment management depends on communicating &lsquo;soft shelled&rsquo; ideas when the conventional data is in opposition. Such communication depends on trust and careful listening&mdash;as described in Capital&mdash; which gets shut down by blaming.&rdquo; (Ellis is referring to his book about the and hindsight, which creates a &ldquo;gotcha&rdquo; noia. Equally important, anecdotal evi- Capital: The Story of Long-Term Investment Success.) Still, why is it that smart people in people can often be unwilling to speak out about problems because they don&rsquo;t want to &ldquo;get other people in trouble&rdquo; or be viewed as &ldquo;grinding an axe.&rdquo; It is dif- gent and competitive people often have the greatest &ldquo;need to be right.&rdquo; (For example, see High Performing Investment Teams: How to Achieve Best Practices of Top Firms by Jim Ware, Jim Dethmer, Jamie Ziegler, and Fran Skinner and Teaching Smart People How to Learn by Chris Argyris.) Organizations that are plagued success from an organization steeped value &ldquo;being right&rdquo; as more important than &ldquo;learning&rdquo; (in a subconscious way). Indeed, perhaps we blame others precisely to satisfy the ego&rsquo;s need to be right. When investment professionals debate in order to prove themselves right and others wrong, it reduces the possibility for learning and thus the possibility for improvement. When research analysts and portfolio managers focus on appearing to have the truth, they are also implicitly committed not to see both sides of the issue but merely to look for conSo, what is the solution? Are investment leaders stuck with a choice of (a) blame or Illustrations by Alex Nabaum When Focus Consulting Group surveyed more than 2,000 investment dents agreed that culture is important ous question becomes: What kind of culture? Jason Hsu and I teamed up to explore this question. He had the statis- Copyright 2014, CFA Institute. Reproduced and republished from CFA Institute Magazine with permission from CFA Institute. All rights reserved.

2) (b) no blame but also no accountability? Clearly, there must a third choice. And there is. It involves developing a culture in which people take responsibility. The mindset of &ldquo;taking responsibility&rdquo; is very different from that of blaming. The person who takes responsibility has learned to ask himself or herself important questions: What is my contribution to the outcome we or not do and say or not say that contributed to this result? As part of this inquiry, I may ask colleagues or clients for feedback, but my primary motivation is learning how my behavior contributed to the outcome. I avoid the allat others. In this view of the world, accountability resurfaces in four ways. First, individual and team goals are made explicit so that one can measure exactly whether the goals are met. Second, when individuals or teams fall action of accountability. Team members are made aware of shortfalls, not in a blaming way but in a factual way is in the wrong job. Still avoiding either blaming or shaming, the manager may would look like, whether within the The critical thing to understand is that blame has been &ldquo;outed&rdquo; as one of the major causes of dysfunction and fail- relative to the goals. In high-performthe approach that is used most often. It will address and resolve most of the performance issues. Obviously, skill in providing feedback is important. Third, when feedback does not work, the reward system (bonuses, promotions, etc.) kicks in. Employees who are unable to raise their performance receive fewer rewards&mdash;again, without blame attached. Finally, if explicit goals, proper feedback, and rewards do not resolve the performance issue, it may mean there a fearful, cover-your-backside culture. Employees become less open, less trusting, and less effective. The antidote to blame is taking responsibility, owning our behavior, holding the mirror up to ourselves, and (when appropriate) providing skillful feedback (not blaming) to our colleagues. Firms that do these things well all report that establishing the right culture takes a while. Blame is deep seated in our psyches and takes a conscious effort to root out. But it can Jason Hsu is co-founding principal and chief investment officer with Research Affiliates. Jim Ware, CFA, is founder of Focus Consulting Group (FCG). Chuck Heisinger at FCG was instrumental in providing FCG data to Jason Hsu for the white paper on which this article is based. Sept/Oct 2014 CFA Institute Magazine 17