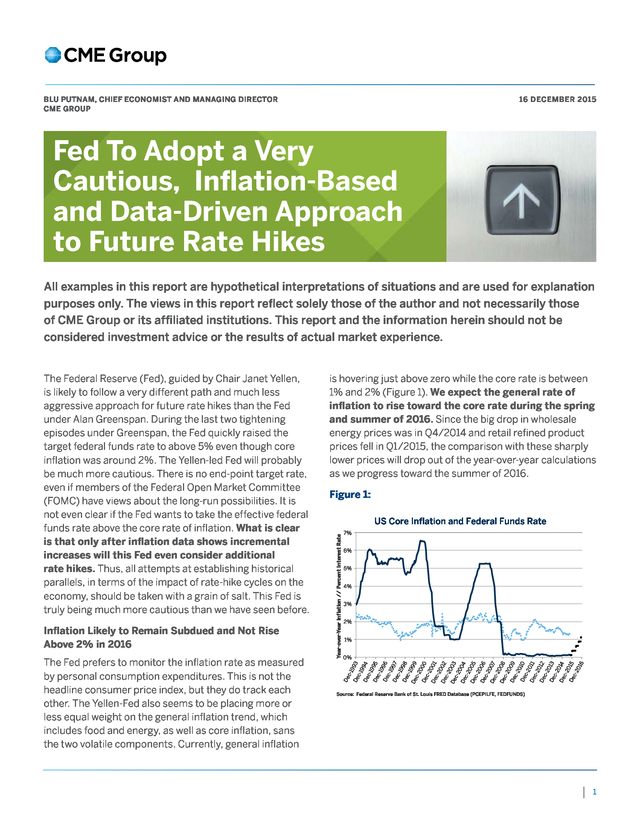 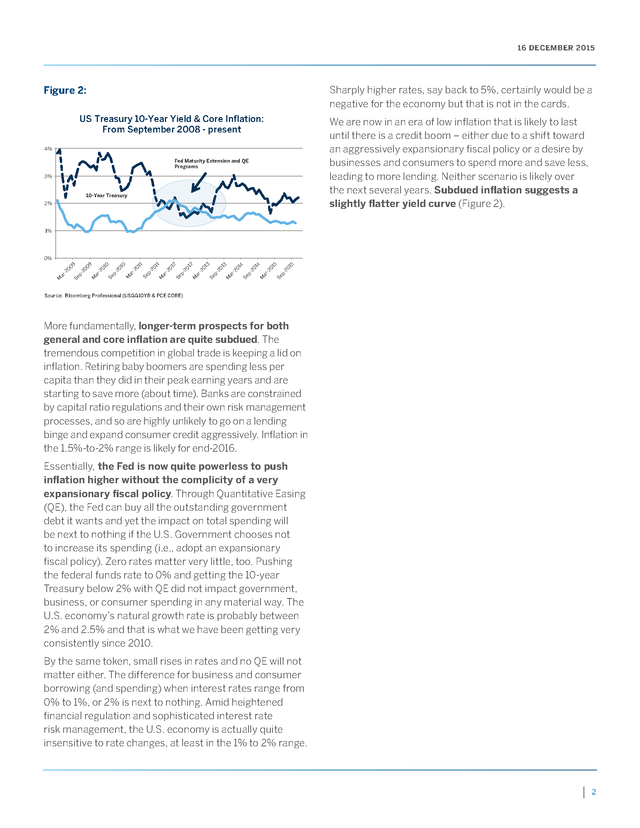 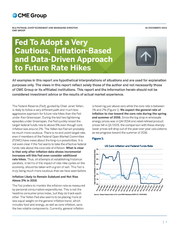 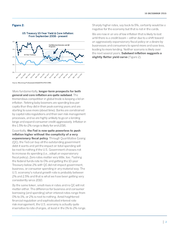 1) BLU PUTNAM, CHIEF ECONOMIST AND MANAGING DIRECTOR CME GROUP 16 DECEMBER 2015 Fed To Adopt a Very Cautious, Inflation-Based and Data-Driven Approach to Future Rate Hikes All examples in this report are hypothetical interpretations of situations and are used for explanation purposes only. The views in this report reflect solely those of the author and not necessarily those of CME Group or its affiliated institutions. This report and the information herein should not be considered investment advice or the results of actual market experience. The Fed prefers to monitor the inflation rate as measured by personal consumption expenditures. This is not the headline consumer price index, but they do track each other. The Yellen-Fed also seems to be placing more or less equal weight on the general inflation trend, which includes food and energy, as well as core inflation, sans the two volatile components. Currently, general inflation Figure 1: US Core Inflation and Federal Funds Rate Year-over-Year Inflation // Percent Interest Rate Inflation Likely to Remain Subdued and Not Rise Above 2% in 2016 is hovering just above zero while the core rate is between 1% and 2% (Figure 1). We expect the general rate of inflation to rise toward the core rate during the spring and summer of 2016. Since the big drop in wholesale energy prices was in Q4/2014 and retail refined product prices fell in Q1/2015, the comparison with these sharply lower prices will drop out of the year-over-year calculations as we progress toward the summer of 2016. 7% 6% 5% 4% 3% 2% 1% 0% De c-1 99 De 3 c-1 99 4 De c-1 99 De 5 c-1 99 6 De c-1 99 De 7 c-1 99 De 8 c-1 De 999 c-2 00 De 0 c-2 De 001 c-2 De 002 c-2 De 003 c-2 00 De 4 c-2 De 005 c-2 00 De c-2 6 De 007 c-2 De 008 c-2 00 De 9 c-2 01 0 De c-2 De 011 c-2 De 012 c-2 De 013 c-2 De 014 c-2 De 015 c-2 01 6 The Federal Reserve (Fed), guided by Chair Janet Yellen, is likely to follow a very different path and much less aggressive approach for future rate hikes than the Fed under Alan Greenspan. During the last two tightening episodes under Greenspan, the Fed quickly raised the target federal funds rate to above 5% even though core inflation was around 2%. The Yellen-led Fed will probably be much more cautious. There is no end-point target rate, even if members of the Federal Open Market Committee (FOMC) have views about the long-run possibilities. It is not even clear if the Fed wants to take the effective federal funds rate above the core rate of inflation. What is clear is that only after inflation data shows incremental increases will this Fed even consider additional rate hikes. Thus, all attempts at establishing historical parallels, in terms of the impact of rate-hike cycles on the economy, should be taken with a grain of salt. This Fed is truly being much more cautious than we have seen before. Source: Federal Reserve Bank of St. Louis FRED Database (PCEPILFE, FEDFUNDS) 1

2) 16 DECEMBER 2015 Sharply higher rates, say back to 5%, certainly would be a negative for the economy but that is not in the cards. Figure 2: US Treasury 10-Year Yield &amp; Core Inflation: From September 2008 - present 4% Fed Maturity Extension and QE Programs 3% 10-Year Treasury 2% We are now in an era of low inflation that is likely to last until there is a credit boom &ndash; either due to a shift toward an aggressively expansionary fiscal policy or a desire by businesses and consumers to spend more and save less, leading to more lending. Neither scenario is likely over the next several years. Subdued inflation suggests a slightly flatter yield curve (Figure 2). 1% M ar -2 00 9 Se p20 09 M ar -2 01 0 Se p20 10 M ar -2 01 1 Se p20 11 M ar -2 01 2 Se p20 12 M ar -2 01 3 Se p20 13 M ar -2 01 4 Se p20 14 M ar -2 01 5 Se p20 15 0% Source: Bloomberg Professional (USGG10YR &amp; PCE CORE) More fundamentally, longer-term prospects for both general and core inflation are quite subdued. The tremendous competition in global trade is keeping a lid on inflation. Retiring baby boomers are spending less per capita than they did in their peak earning years and are starting to save more (about time). Banks are constrained by capital ratio regulations and their own risk management processes, and so are highly unlikely to go on a lending binge and expand consumer credit aggressively. Inflation in the 1.5%-to-2% range is likely for end-2016. Essentially, the Fed is now quite powerless to push inflation higher without the complicity of a very expansionary fiscal policy. Through Quantitative Easing (QE), the Fed can buy all the outstanding government debt it wants and yet the impact on total spending will be next to nothing if the U.S. Government chooses not to increase its spending (i.e., adopt an expansionary fiscal policy). Zero rates matter very little, too. Pushing the federal funds rate to 0% and getting the 10-year Treasury below 2% with QE did not impact government, business, or consumer spending in any material way. The U.S. economy&rsquo;s natural growth rate is probably between 2% and 2.5% and that is what we have been getting very consistently since 2010. By the same token, small rises in rates and no QE will not matter either. The difference for business and consumer borrowing (and spending) when interest rates range from 0% to 1%, or 2% is next to nothing. Amid heightened financial regulation and sophisticated interest rate risk management, the U.S. economy is actually quite insensitive to rate changes, at least in the 1% to 2% range. 2