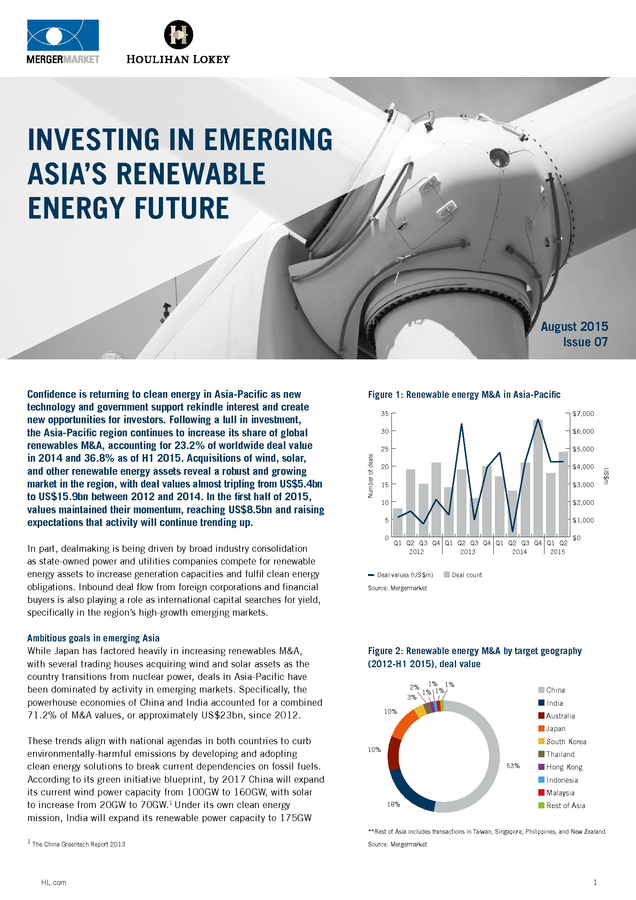 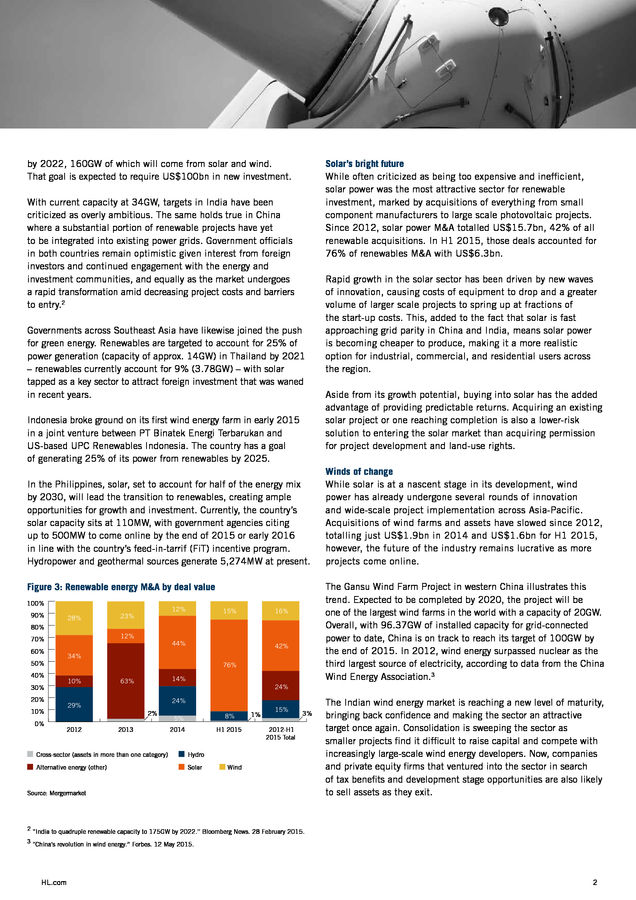 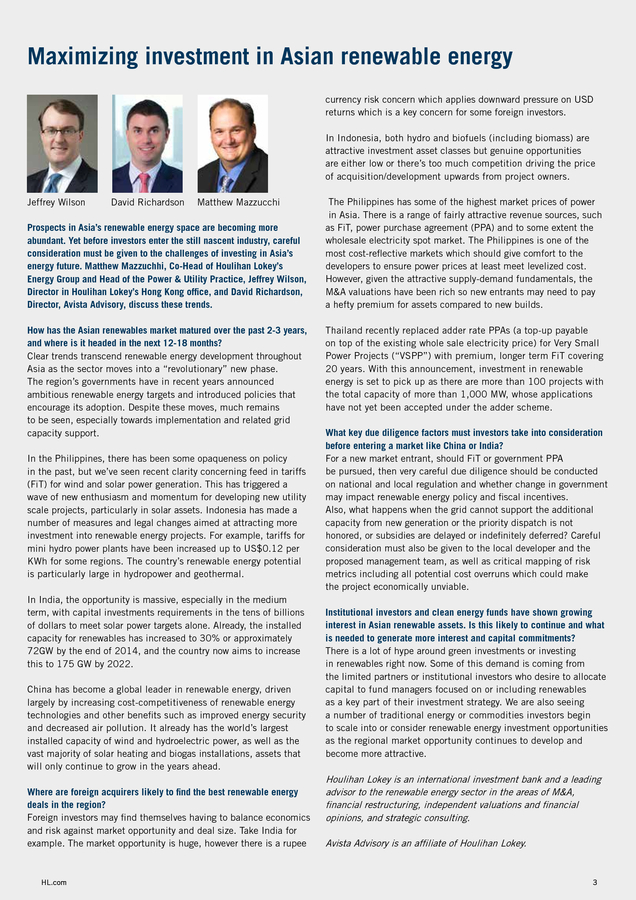 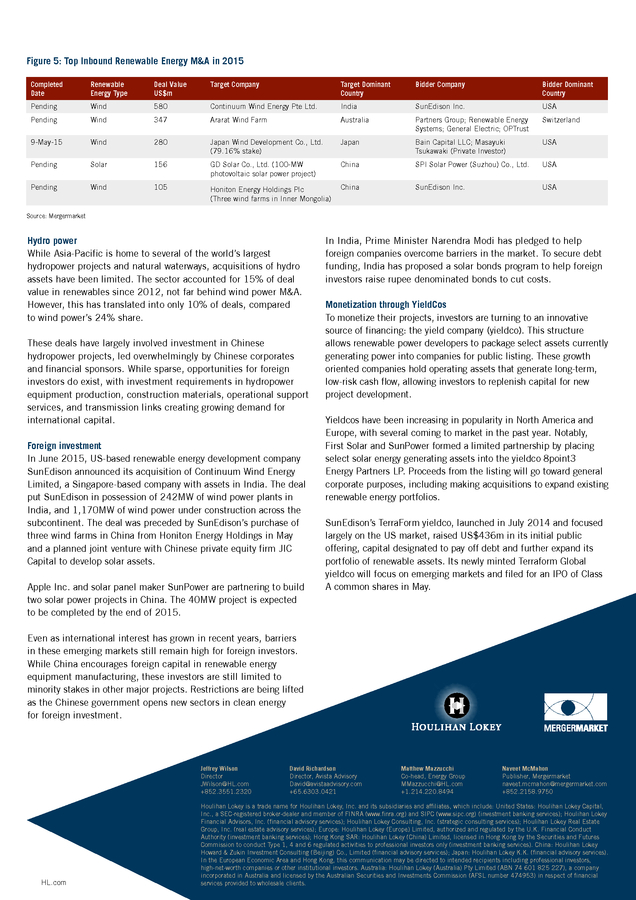 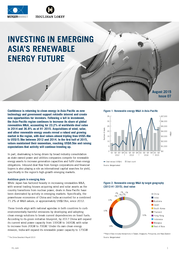 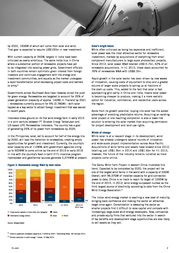 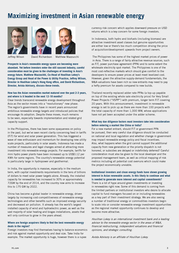 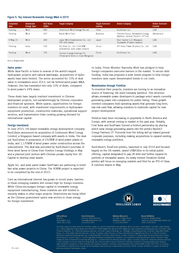 1) INVESTING IN EMERGING ASIA&rsquo;S RENEWABLE ENERGY FUTURE August 2015 Issue 07 Figure 1: Renewable energy M&amp;A in Asia-Pacific $7,000 30 $6,000 25 $5,000 20 $4,000 15 $3,000 10 $2,000 5 Number of deals 35 $1,000 0 In part, dealmaking is being driven by broad industry consolidation as state-owned power and utilities companies compete for renewable energy assets to increase generation capacities and fulfil clean energy obligations. Inbound deal flow from foreign corporations and financial buyers is also playing a role as international capital searches for yield, specifically in the region&rsquo;s high-growth emerging markets. Ambitious goals in emerging Asia While Japan has factored heavily in increasing renewables M&amp;A, with several trading houses acquiring wind and solar assets as the country transitions from nuclear power, deals in Asia-Pacific have been dominated by activity in emerging markets. Specifically, the powerhouse economies of China and India accounted for a combined 71.2% of M&amp;A values, or approximately US$23bn, since 2012. Q1 Q2 Q3 Q4 Q1 Q2 Q3 Q4 Q1 Q2 Q3 Q4 Q1 Q2 2012 2013 2014 2015 Deal values (US$m) US$m Confidence is returning to clean energy in Asia-Pacific as new technology and government support rekindle interest and create new opportunities for investors. Following a lull in investment, the Asia-Pacific region continues to increase its share of global renewables M&amp;A, accounting for 23.2% of worldwide deal value in 2014 and 36.8% as of H1 2015. Acquisitions of wind, solar, and other renewable energy assets reveal a robust and growing market in the region, with deal values almost tripling from US$5.4bn to US$15.9bn between 2012 and 2014. In the first half of 2015, values maintained their momentum, reaching US$8.5bn and raising expectations that activity will continue trending up. $0 Deal count Source: Mergermarket Figure 2: Renewable energy M&amp;A by target geography (2012-H1 2015), deal value 2% 3% 1% 1% 1% 1% China India 10% Australia Japan These trends align with national agendas in both countries to curb environmentally-harmful emissions by developing and adopting clean energy solutions to break current dependencies on fossil fuels. According to its green initiative blueprint, by 2017 China will expand its current wind power capacity from 100GW to 160GW, with solar to increase from 20GW to 70GW.1 Under its own clean energy mission, India will expand its renewable power capacity to 175GW South Korea 10% Thailand 53% Hong Kong Indonesia Malaysia 18% Rest of Asia **Rest of Asia includes transactions in Taiwan, Singapore, Philippines, and New Zealand 1 The China Greentech Report 2013 HL.com Source: Mergermarket 1

2) Solar&rsquo;s bright future While often criticized as being too expensive and inefficient, solar power was the most attractive sector for renewable investment, marked by acquisitions of everything from small component manufacturers to large scale photovoltaic projects. Since 2012, solar power M&amp;A totalled US$15.7bn, 42% of all renewable acquisitions. In H1 2015, those deals accounted for 76% of renewables M&amp;A with US$6.3bn. by 2022, 160GW of which will come from solar and wind. That goal is expected to require US$100bn in new investment. With current capacity at 34GW, targets in India have been criticized as overly ambitious. The same holds true in China where a substantial portion of renewable projects have yet to be integrated into existing power grids. Government officials in both countries remain optimistic given interest from foreign investors and continued engagement with the energy and investment communities, and equally as the market undergoes a rapid transformation amid decreasing project costs and barriers to entry.2 Governments across Southeast Asia have likewise joined the push for green energy. Renewables are targeted to account for 25% of power generation (capacity of approx. 14GW) in Thailand by 2021 &ndash; renewables currently account for 9% (3.78GW) &ndash; with solar tapped as a key sector to attract foreign investment that was waned in recent years. Indonesia broke ground on its first wind energy farm in early 2015 in a joint venture between PT Binatek Energi Terbarukan and US-based UPC Renewables Indonesia. The country has a goal of generating 25% of its power from renewables by 2025. In the Philippines, solar, set to account for half of the energy mix by 2030, will lead the transition to renewables, creating ample opportunities for growth and investment. Currently, the country&rsquo;s solar capacity sits at 110MW, with government agencies citing up to 500MW to come online by the end of 2015 or early 2016 in line with the country&rsquo;s feed-in-tarrif (FiT) incentive program. Hydropower and geothermal sources generate 5,274MW at present. Figure 3: Renewable energy M&amp;A by deal value 100% 90% 28% 12% 23% 15% 12% 60% 16% 42% 34% 50% 76% 40% 10% 30% 20% 14% 63% 2% 2012 2013 5% 8% 2014 H1 2015 Cross-sector (assets in more than one category) Alternative energy (other) Winds of change While solar is at a nascent stage in its development, wind power has already undergone several rounds of innovation and wide-scale project implementation across Asia-Pacific. Acquisitions of wind farms and assets have slowed since 2012, totalling just US$1.9bn in 2014 and US$1.6bn for H1 2015, however, the future of the industry remains lucrative as more projects come online. 24% 24% 29% 10% 0% 44% Aside from its growth potential, buying into solar has the added advantage of providing predictable returns. Acquiring an existing solar project or one reaching completion is also a lower-risk solution to entering the solar market than acquiring permission for project development and land-use rights. The Gansu Wind Farm Project in western China illustrates this trend. Expected to be completed by 2020, the project will be one of the largest wind farms in the world with a capacity of 20GW. Overall, with 96.37GW of installed capacity for grid-connected power to date, China is on track to reach its target of 100GW by the end of 2015. In 2012, wind energy surpassed nuclear as the third largest source of electricity, according to data from the China Wind Energy Association.3 80% 70% Rapid growth in the solar sector has been driven by new waves of innovation, causing costs of equipment to drop and a greater volume of larger scale projects to spring up at fractions of the start-up costs. This, added to the fact that solar is fast approaching grid parity in China and India, means solar power is becoming cheaper to produce, making it a more realistic option for industrial, commercial, and residential users across the region. 1% 15% 3% 2012-H1 2015 Total Hydro Solar Wind Source: Mergermarket 2 &ldquo;India to quadruple renewable capacity to 175GW by 2022.&rdquo; Bloomberg News. 28 February 2015. 3 The Indian wind energy market is reaching a new level of maturity, bringing back confidence and making the sector an attractive target once again. Consolidation is sweeping the sector as smaller projects find it difficult to raise capital and compete with increasingly large-scale wind energy developers. Now, companies and private equity firms that ventured into the sector in search of tax benefits and development stage opportunities are also likely to sell assets as they exit. &ldquo;China&rsquo;s revolution in wind energy.&rdquo; Forbes. 12 May 2015. HL.com 2

3) Maximizing investment in Asian renewable energy currency risk concern which applies downward pressure on USD returns which is a key concern for some foreign investors. In Indonesia, both hydro and biofuels (including biomass) are attractive investment asset classes but genuine opportunities are either low or there&rsquo;s too much competition driving the price of acquisition/development upwards from project owners. Jeffrey Wilson David Richardson Matthew Mazzucchi Prospects in Asia&rsquo;s renewable energy space are becoming more abundant. Yet before investors enter the still nascent industry, careful consideration must be given to the challenges of investing in Asia&rsquo;s energy future. Matthew Mazzuchhi, Co-Head of Houlihan Lokey&rsquo;s Energy Group and Head of the Power &amp; Utility Practice, Jeffrey Wilson, Director in Houlihan Lokey&rsquo;s Hong Kong office, and David Richardson, Director, Avista Advisory, discuss these trends. How has the Asian renewables market matured over the past 2-3 years, and where is it headed in the next 12-18 months? Clear trends transcend renewable energy development throughout Asia as the sector moves into a &ldquo;revolutionary&rdquo; new phase. The region&rsquo;s governments have in recent years announced ambitious renewable energy targets and introduced policies that encourage its adoption. Despite these moves, much remains to be seen, especially towards implementation and related grid capacity support. In the Philippines, there has been some opaqueness on policy in the past, but we&rsquo;ve seen recent clarity concerning feed in tariffs (FiT) for wind and solar power generation. This has triggered a wave of new enthusiasm and momentum for developing new utility scale projects, particularly in solar assets. Indonesia has made a number of measures and legal changes aimed at attracting more investment into renewable energy projects. For example, tariffs for mini hydro power plants have been increased up to US$0.12 per KWh for some regions. The country&rsquo;s renewable energy potential is particularly large in hydropower and geothermal. In India, the opportunity is massive, especially in the medium term, with capital investments requirements in the tens of billions of dollars to meet solar power targets alone. Already, the installed capacity for renewables has increased to 30% or approximately 72GW by the end of 2014, and the country now aims to increase this to 175 GW by 2022. China has become a global leader in renewable energy, driven largely by increasing cost-competitiveness of renewable energy technologies and other benefits such as improved energy security and decreased air pollution. It already has the world&rsquo;s largest installed capacity of wind and hydroelectric power, as well as the vast majority of solar heating and biogas installations, assets that will only continue to grow in the years ahead. Where are foreign acquirers likely to find the best renewable energy deals in the region? Foreign investors may find themselves having to balance economics and risk against market opportunity and deal size. Take India for example. The market opportunity is huge, however there is a rupee HL.com The Philippines has some of the highest market prices of power in Asia. There is a range of fairly attractive revenue sources, such as FiT, power purchase agreement (PPA) and to some extent the wholesale electricity spot market. The Philippines is one of the most cost-reflective markets which should give comfort to the developers to ensure power prices at least meet levelized cost. However, given the attractive supply-demand fundamentals, the M&amp;A valuations have been rich so new entrants may need to pay a hefty premium for assets compared to new builds. Thailand recently replaced adder rate PPAs (a top-up payable on top of the existing whole sale electricity price) for Very Small Power Projects (&ldquo;VSPP&rdquo;) with premium, longer term FiT covering 20 years. With this announcement, investment in renewable energy is set to pick up as there are more than 100 projects with the total capacity of more than 1,000 MW, whose applications have not yet been accepted under the adder scheme. What key due diligence factors must investors take into consideration before entering a market like China or India? For a new market entrant, should FiT or government PPA be pursued, then very careful due diligence should be conducted on national and local regulation and whether change in government may impact renewable energy policy and fiscal incentives. Also, what happens when the grid cannot support the additional capacity from new generation or the priority dispatch is not honored, or subsidies are delayed or indefinitely deferred? Careful consideration must also be given to the local developer and the proposed management team, as well as critical mapping of risk metrics including all potential cost overruns which could make the project economically unviable. Institutional investors and clean energy funds have shown growing interest in Asian renewable assets. Is this likely to continue and what is needed to generate more interest and capital commitments? There is a lot of hype around green investments or investing in renewables right now. Some of this demand is coming from the limited partners or institutional investors who desire to allocate capital to fund managers focused on or including renewables as a key part of their investment strategy. We are also seeing a number of traditional energy or commodities investors begin to scale into or consider renewable energy investment opportunities as the regional market opportunity continues to develop and become more attractive. Houlihan Lokey is an international investment bank and a leading advisor to the renewable energy sector in the areas of M&amp;A, financial restructuring, independent valuations and financial opinions, and strategic consulting. Avista Advisory is an affiliate of Houlihan Lokey. 3