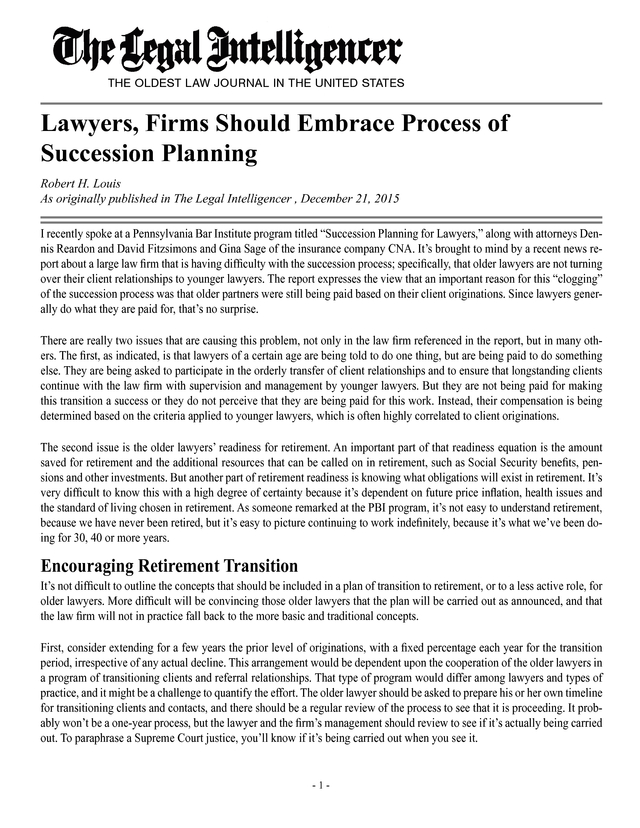 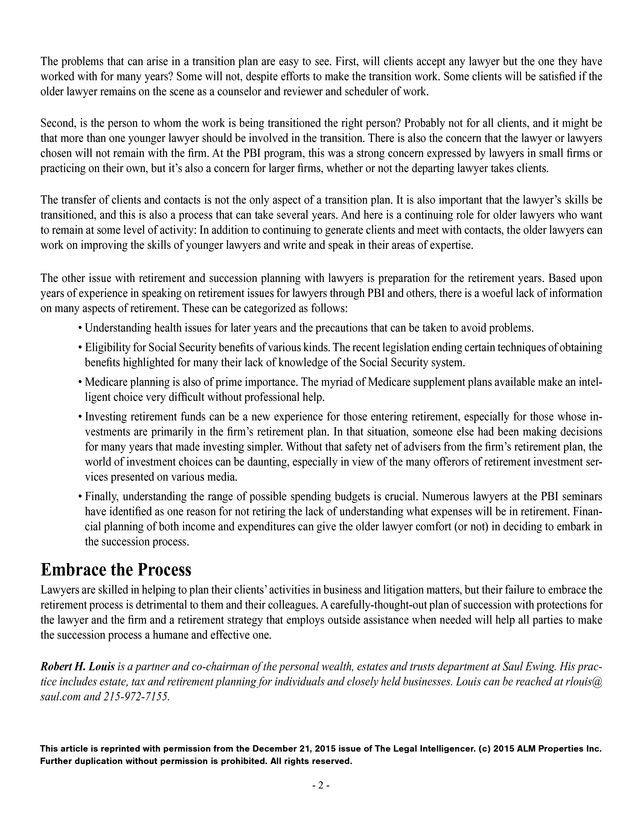 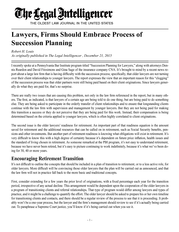 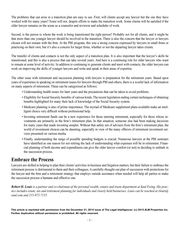 1
1 of 2
Louis writes article for Legal Intelligencer on importance of succession planning for retiring lawyers - December 21, 2015

1) THE OLDEST LAW JOURNAL IN THE UNITED STATES Lawyers, Firms Should Embrace Process of Succession Planning Robert H. Louis As originally published in The Legal Intelligencer , December 21, 2015 I recently spoke at a Pennsylvania Bar Institute program titled &ldquo;Succession Planning for Lawyers,&rdquo; along with attorneys Dennis Reardon and David Fitzsimons and Gina Sage of the insurance company CNA. It&rsquo;s brought to mind by a recent news report about a large law firm that is having difficulty with the succession process; specifically, that older lawyers are not turning over their client relationships to younger lawyers. The report expresses the view that an important reason for this &ldquo;clogging&rdquo; of the succession process was that older partners were still being paid based on their client originations. Since lawyers generally do what they are paid for, that&rsquo;s no surprise. There are really two issues that are causing this problem, not only in the law firm referenced in the report, but in many others. The first, as indicated, is that lawyers of a certain age are being told to do one thing, but are being paid to do something else. They are being asked to participate in the orderly transfer of client relationships and to ensure that longstanding clients continue with the law firm with supervision and management by younger lawyers. But they are not being paid for making this transition a success or they do not perceive that they are being paid for this work. Instead, their compensation is being determined based on the criteria applied to younger lawyers, which is often highly correlated to client originations. The second issue is the older lawyers&rsquo; readiness for retirement. An important part of that readiness equation is the amount saved for retirement and the additional resources that can be called on in retirement, such as Social Security benefits, pensions and other investments. But another part of retirement readiness is knowing what obligations will exist in retirement. It&rsquo;s very difficult to know this with a high degree of certainty because it&rsquo;s dependent on future price inflation, health issues and the standard of living chosen in retirement. As someone remarked at the PBI program, it&rsquo;s not easy to understand retirement, because we have never been retired, but it&rsquo;s easy to picture continuing to work indefinitely, because it&rsquo;s what we&rsquo;ve been doing for 30, 40 or more years. Encouraging Retirement Transition It&rsquo;s not difficult to outline the concepts that should be included in a plan of transition to retirement, or to a less active role, for older lawyers. More difficult will be convincing those older lawyers that the plan will be carried out as announced, and that the law firm will not in practice fall back to the more basic and traditional concepts. First, consider extending for a few years the prior level of originations, with a fixed percentage each year for the transition period, irrespective of any actual decline. This arrangement would be dependent upon the cooperation of the older lawyers in a program of transitioning clients and referral relationships. That type of program would differ among lawyers and types of practice, and it might be a challenge to quantify the effort. The older lawyer should be asked to prepare his or her own timeline for transitioning clients and contacts, and there should be a regular review of the process to see that it is proceeding. It probably won&rsquo;t be a one-year process, but the lawyer and the firm&rsquo;s management should review to see if it&rsquo;s actually being carried out. To paraphrase a Supreme Court justice, you&rsquo;ll know if it&rsquo;s being carried out when you see it. -1-

2) The problems that can arise in a transition plan are easy to see. First, will clients accept any lawyer but the one they have worked with for many years? Some will not, despite efforts to make the transition work. Some clients will be satisfied if the older lawyer remains on the scene as a counselor and reviewer and scheduler of work. Second, is the person to whom the work is being transitioned the right person? Probably not for all clients, and it might be that more than one younger lawyer should be involved in the transition. There is also the concern that the lawyer or lawyers chosen will not remain with the firm. At the PBI program, this was a strong concern expressed by lawyers in small firms or practicing on their own, but it&rsquo;s also a concern for larger firms, whether or not the departing lawyer takes clients. The transfer of clients and contacts is not the only aspect of a transition plan. It is also important that the lawyer&rsquo;s skills be transitioned, and this is also a process that can take several years. And here is a continuing role for older lawyers who want to remain at some level of activity: In addition to continuing to generate clients and meet with contacts, the older lawyers can work on improving the skills of younger lawyers and write and speak in their areas of expertise. The other issue with retirement and succession planning with lawyers is preparation for the retirement years. Based upon years of experience in speaking on retirement issues for lawyers through PBI and others, there is a woeful lack of information on many aspects of retirement. These can be categorized as follows: &bull; Understanding health issues for later years and the precautions that can be taken to avoid problems.  &bull; Eligibility for Social Security benefits of various kinds. The recent legislation ending certain techniques of obtaining  benefits highlighted for many their lack of knowledge of the Social Security system. &bull;  edicare planning is also of prime importance. The myriad of Medicare supplement plans available make an intelM ligent choice very difficult without professional help. &bull; nvesting retirement funds can be a new experience for those entering retirement, especially for those whose inI vestments are primarily in the firm&rsquo;s retirement plan. In that situation, someone else had been making decisions for many years that made investing simpler. Without that safety net of advisers from the firm&rsquo;s retirement plan, the world of investment choices can be daunting, especially in view of the many offerors of retirement investment services presented on various media. &bull;  inally, understanding the range of possible spending budgets is crucial. Numerous lawyers at the PBI seminars F have identified as one reason for not retiring the lack of understanding what expenses will be in retirement. Financial planning of both income and expenditures can give the older lawyer comfort (or not) in deciding to embark in the succession process. Embrace the Process Lawyers are skilled in helping to plan their clients&rsquo; activities in business and litigation matters, but their failure to embrace the retirement process is detrimental to them and their colleagues. A carefully-thought-out plan of succession with protections for the lawyer and the firm and a retirement strategy that employs outside assistance when needed will help all parties to make the succession process a humane and effective one. Robert H. Louis is a partner and co-chairman of the personal wealth, estates and trusts department at Saul Ewing. His practice includes estate, tax and retirement planning for individuals and closely held businesses. Louis can be reached at rlouis@ saul.com and 215-972-7155. This article is reprinted with permission from the December 21, 2015 issue of The Legal Intelligencer. (c) 2015 ALM Properties Inc. Further duplication without permission is prohibited. All rights reserved. -2-