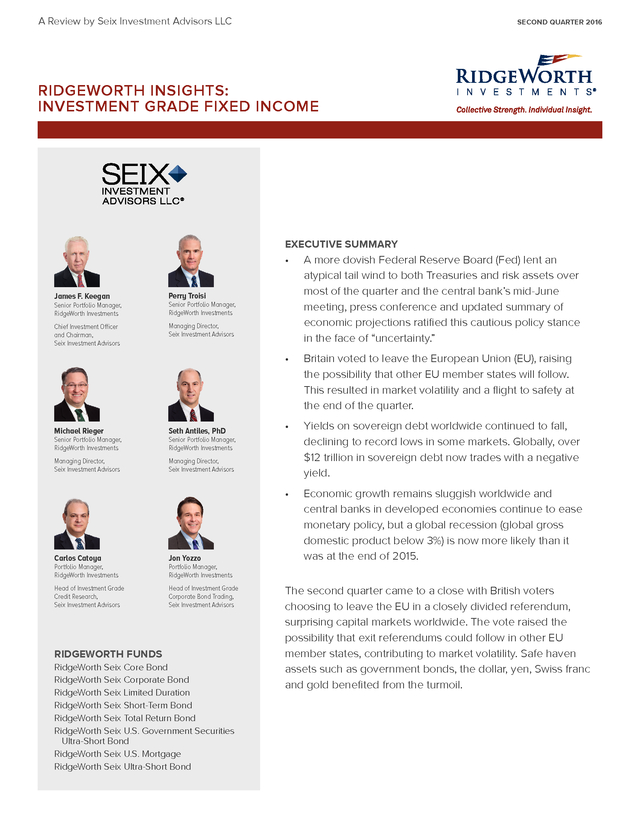 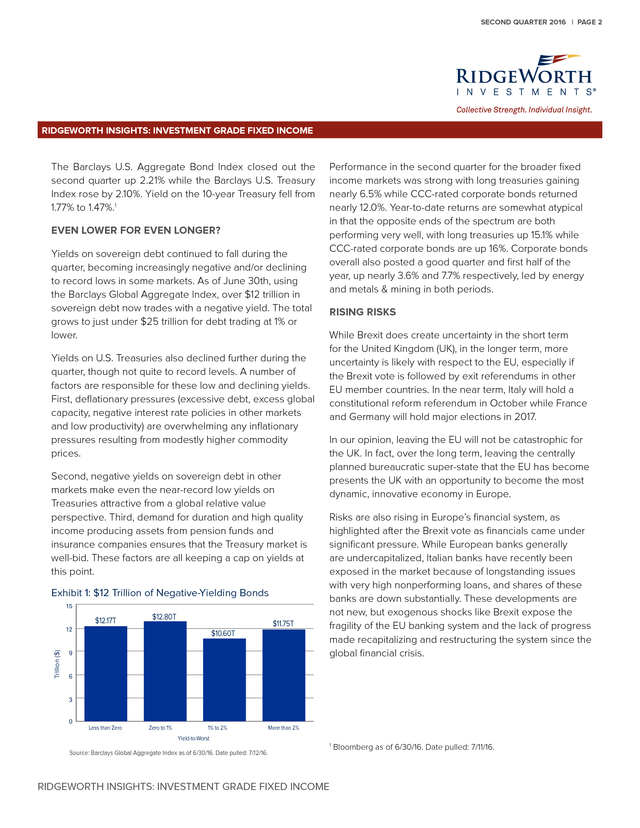 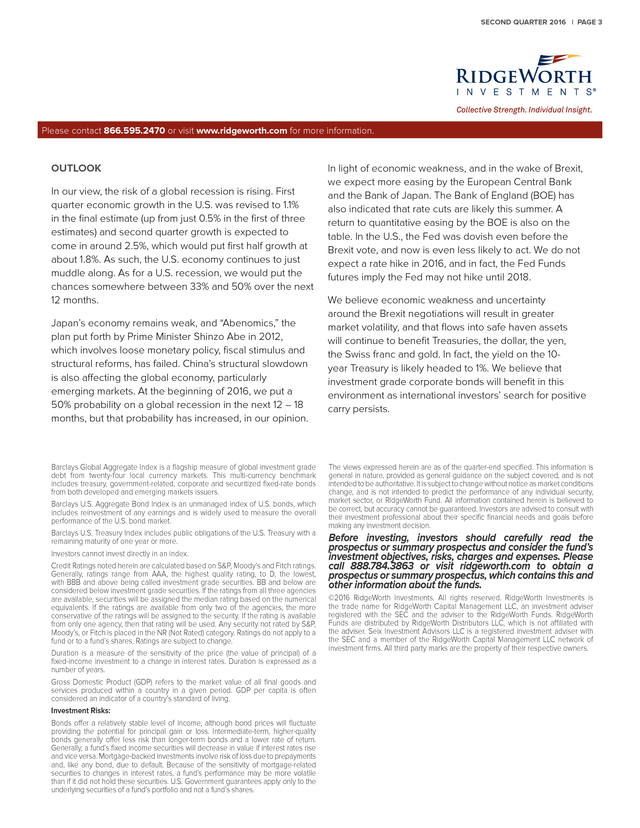 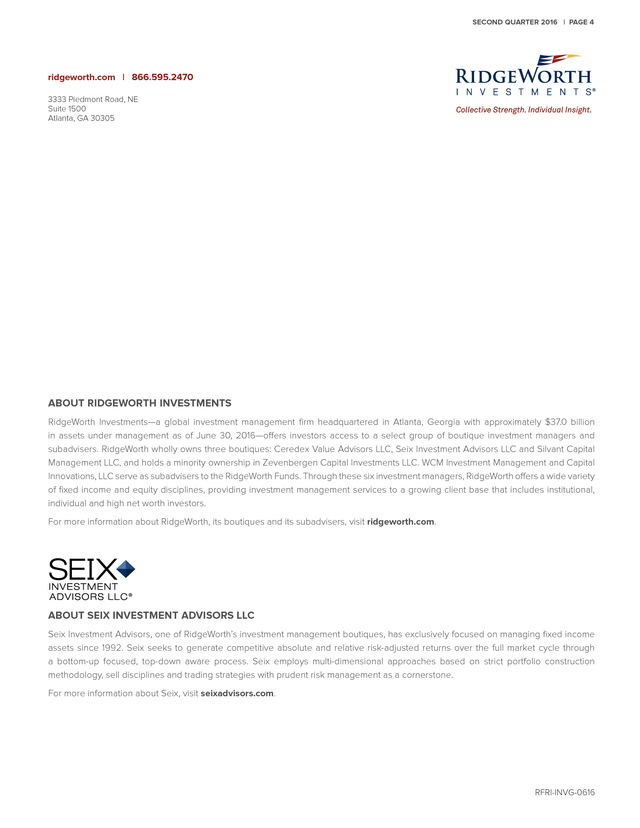 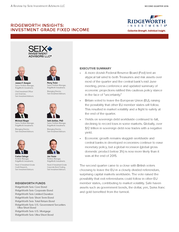 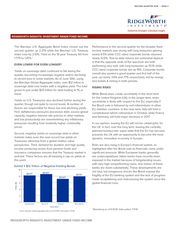 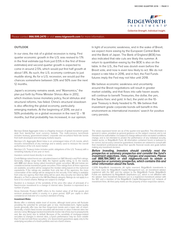 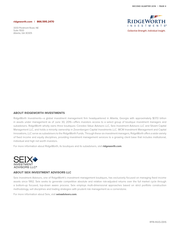 2)  SECOND QUARTER 2016 | PAGE 2 RIDGEWORTH INSIGHTS: INVESTMENT GRADE FIXED INCOME The Barclays U.S. Aggregate Bond Index closed out the second quarter up 2.21% while the Barclays U.S. Treasury Index rose by 2.10%. Yield on the 10-year Treasury fell from 1.77% to 1.47%.1 EVEN LOWER FOR EVEN LONGER? Yields on sovereign debt continued to fall during the quarter, becoming increasingly negative and/or declining to record lows in some markets. As of June 30th, using the Barclays Global Aggregate Index, over $12 trillion in sovereign debt now trades with a negative yield. The total grows to just under $25 trillion for debt trading at 1% or lower. Yields on U.S. Treasuries also declined further during the quarter, though not quite to record levels. A number of factors are responsible for these low and declining yields. First, deflationary pressures (excessive debt, excess global capacity, negative interest rate policies in other markets and low productivity) are overwhelming any inflationary pressures resulting from modestly higher commodity prices. Second, negative yields on sovereign debt in other markets make even the near-record low yields on Treasuries attractive from a global relative value perspective. Third, demand for duration and high quality income producing assets from pension funds and insurance companies ensures that the Treasury market is well-bid. These factors are all keeping a cap on yields at this point. Exhibit 1: $12 Trillion of Negative-Yielding Bonds 15 $12.17T $12.80T $11.75T Trillion ($) 12 $10.60T 9 Performance in the second quarter for the broader fixed income markets was strong with long treasuries gaining nearly 6.5% while CCC-rated corporate bonds returned nearly 12.0%. Year-to-date returns are somewhat atypical in that the opposite ends of the spectrum are both performing very well, with long treasuries up 15.1% while CCC-rated corporate bonds are up 16%. Corporate bonds overall also posted a good quarter and first half of the year, up nearly 3.6% and 7.7% respectively, led by energy and metals &amp; mining in both periods. RISING RISKS While Brexit does create uncertainty in the short term for the United Kingdom (UK), in the longer term, more uncertainty is likely with respect to the EU, especially if the Brexit vote is followed by exit referendums in other EU member countries. In the near term, Italy will hold a constitutional reform referendum in October while France and Germany will hold major elections in 2017. In our opinion, leaving the EU will not be catastrophic for the UK. In fact, over the long term, leaving the centrally planned bureaucratic super-state that the EU has become presents the UK with an opportunity to become the most dynamic, innovative economy in Europe. Risks are also rising in Europe&rsquo;s financial system, as highlighted after the Brexit vote as financials came under significant pressure. While European banks generally are undercapitalized, Italian banks have recently been exposed in the market because of longstanding issues with very high nonperforming loans, and shares of these banks are down substantially. These developments are not new, but exogenous shocks like Brexit expose the fragility of the EU banking system and the lack of progress made recapitalizing and restructuring the system since the global financial crisis. 6 3 0 Less than Zero Zero to 1% 1% to 2% More than 2% Yield-to-Worst 1 Source: Barclays Global Aggregate Index as of 6/30/16. Date pulled: 7/12/16. RIDGEWORTH INSIGHTS: INVESTMENT GRADE FIXED INCOME Bloomberg as of 6/30/16. Date pulled: 7/11/16.

3)  SECOND QUARTER 2016 | PAGE 3 Please contact 866.595.2470 or visit www.ridgeworth.com for more information. OUTLOOK In our view, the risk of a global recession is rising. First quarter economic growth in the U.S. was revised to 1.1% in the final estimate (up from just 0.5% in the first of three estimates) and second quarter growth is expected to come in around 2.5%, which would put first half growth at about 1.8%. As such, the U.S. economy continues to just muddle along. As for a U.S. recession, we would put the chances somewhere between 33% and 50% over the next 12 months. Japan&rsquo;s economy remains weak, and &ldquo;Abenomics,&rdquo; the plan put forth by Prime Minister Shinzo Abe in 2012, which involves loose monetary policy, fiscal stimulus and structural reforms, has failed. China&rsquo;s structural slowdown is also affecting the global economy, particularly emerging markets. At the beginning of 2016, we put a 50% probability on a global recession in the next 12 &ndash; 18 months, but that probability has increased, in our opinion. Barclays Global Aggregate Index is a flagship measure of global investment grade debt from twenty-four local currency markets. This multi-currency benchmark includes treasury, government-related, corporate and securitized fixed-rate bonds from both developed and emerging markets issuers. Barclays U.S. Aggregate Bond Index is an unmanaged index of U.S. bonds, which includes reinvestment of any earnings and is widely used to measure the overall performance of the U.S. bond market. Barclays U.S. Treasury Index includes public obligations of the U.S. Treasury with a remaining maturity of one year or more. Investors cannot invest directly in an index. Credit Ratings noted herein are calculated based on S&amp;P, Moody&rsquo;s and Fitch ratings. Generally, ratings range from AAA, the highest quality rating, to D, the lowest, with BBB and above being called investment grade securities. BB and below are considered below investment grade securities. If the ratings from all three agencies are available, securities will be assigned the median rating based on the numerical equivalents. If the ratings are available from only two of the agencies, the more conservative of the ratings will be assigned to the security. If the rating is available from only one agency, then that rating will be used. Any security not rated by S&amp;P, Moody&rsquo;s, or Fitch is placed in the NR (Not Rated) category. Ratings do not apply to a fund or to a fund&rsquo;s shares. Ratings are subject to change. Duration is a measure of the sensitivity of the price (the value of principal) of a fixed-income investment to a change in interest rates. Duration is expressed as a number of years. Gross Domestic Product (GDP) refers to the market value of all final goods and services produced within a country in a given period. GDP per capita is often considered an indicator of a country&rsquo;s standard of living. Investment Risks: Bonds offer a relatively stable level of income, although bond prices will fluctuate providing the potential for principal gain or loss. Intermediate-term, higher-quality bonds generally offer less risk than longer-term bonds and a lower rate of return. Generally, a fund&rsquo;s fixed income securities will decrease in value if interest rates rise and vice versa. Mortgage-backed investments involve risk of loss due to prepayments and, like any bond, due to default. Because of the sensitivity of mortgage-related securities to changes in interest rates, a fund&rsquo;s performance may be more volatile than if it did not hold these securities. U.S. Government guarantees apply only to the underlying securities of a fund&rsquo;s portfolio and not a fund&rsquo;s shares. In light of economic weakness, and in the wake of Brexit, we expect more easing by the European Central Bank and the Bank of Japan. The Bank of England (BOE) has also indicated that rate cuts are likely this summer. A return to quantitative easing by the BOE is also on the table. In the U.S., the Fed was dovish even before the Brexit vote, and now is even less likely to act. We do not expect a rate hike in 2016, and in fact, the Fed Funds futures imply the Fed may not hike until 2018. We believe economic weakness and uncertainty around the Brexit negotiations will result in greater market volatility, and that flows into safe haven assets will continue to benefit Treasuries, the dollar, the yen, the Swiss franc and gold. In fact, the yield on the 10year Treasury is likely headed to 1%. We believe that investment grade corporate bonds will benefit in this environment as international investors&rsquo; search for positive carry persists. The views expressed herein are as of the quarter-end specified. This information is general in nature, provided as general guidance on the subject covered, and is not intended to be authoritative. It is subject to change without notice as market conditions change, and is not intended to predict the performance of any individual security, market sector, or RidgeWorth Fund. All information contained herein is believed to be correct, but accuracy cannot be guaranteed. Investors are advised to consult with their investment professional about their specific financial needs and goals before making any investment decision. Before investing, investors should carefully read the prospectus or summary prospectus and consider the fund&rsquo;s investment objectives, risks, charges and expenses. Please call 888.784.3863 or visit ridgeworth.com to obtain a prospectus or summary prospectus, which contains this and other information about the funds. &copy;2016 RidgeWorth Investments. All rights reserved. RidgeWorth Investments is the trade name for RidgeWorth Capital Management LLC, an investment adviser registered with the SEC and the adviser to the RidgeWorth Funds. RidgeWorth Funds are distributed by RidgeWorth Distributors LLC, which is not affiliated with the adviser. Seix Investment Advisors LLC is a registered investment adviser with the SEC and a member of the RidgeWorth Capital Management LLC network of investment firms. All third party marks are the property of their respective owners.