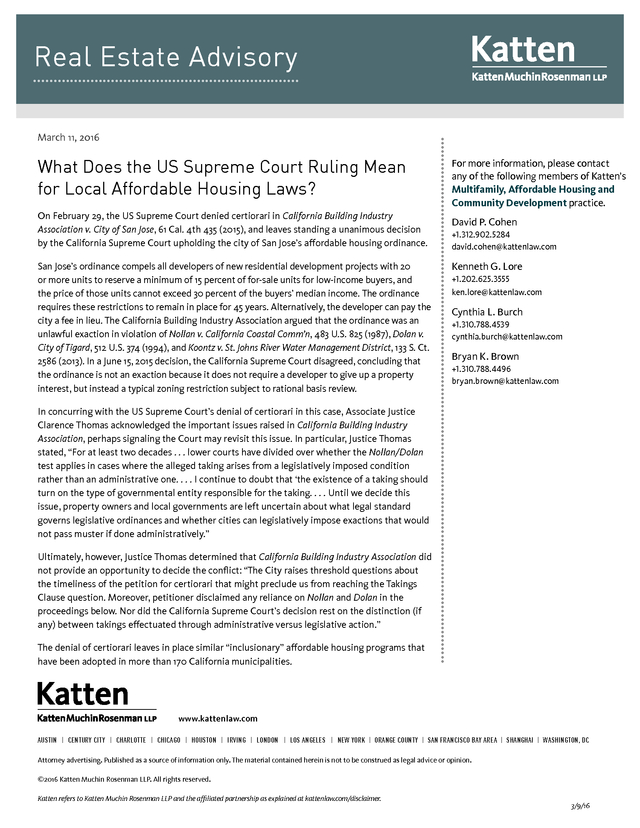 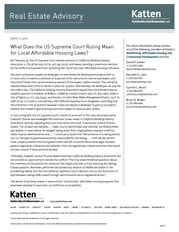 1) Real Estate Advisory March 11, 2016 What Does the US Supreme Court Ruling Mean for Local Affordable Housing Laws? On February 29, the US Supreme Court denied certiorari in California Building Industry Association v. City of San Jose, 61 Cal. 4th 435 (2015), and leaves standing a unanimous decision by the California Supreme Court upholding the city of San Jose&rsquo;s affordable housing ordinance. San Jose&rsquo;s ordinance compels all developers of new residential development projects with 20 or more units to reserve a minimum of 15 percent of for-sale units for low-income buyers, and the price of those units cannot exceed 30 percent of the buyers&rsquo; median income. The ordinance requires these restrictions to remain in place for 45 years. Alternatively, the developer can pay the city a fee in lieu. The California Building Industry Association argued that the ordinance was an unlawful exaction in violation of Nollan v. California Coastal Comm&rsquo;n, 483 U.S. 825 (1987), Dolan v. City of Tigard, 512 U.S. 374 (1994), and Koontz v. St. Johns River Water Management District, 133 S. Ct. 2586 (2013). In a June 15, 2015 decision, the California Supreme Court disagreed, concluding that the ordinance is not an exaction because it does not require a developer to give up a property interest, but instead a typical zoning restriction subject to rational basis review. For more information, please contact any of the following members of Katten&rsquo;s Multifamily, Affordable Housing and Community Development practice. David P. Cohen +1.312.902.5284 david.cohen@kattenlaw.com Kenneth G. Lore +1.202.625.3555 ken.lore@kattenlaw.com Cynthia L. Burch +1.310.788.4539 cynthia.burch@kattenlaw.com Bryan K. Brown +1.310.788.4496 bryan.brown@kattenlaw.com In concurring with the US Supreme Court&rsquo;s denial of certiorari in this case, Associate Justice Clarence Thomas acknowledged the important issues raised in California Building Industry Association, perhaps signaling the Court may revisit this issue. In particular, Justice Thomas stated, &ldquo;For at least two decades . . . lower courts have divided over whether the Nollan/Dolan test applies in cases where the alleged taking arises from a legislatively imposed condition rather than an administrative one. . . . I continue to doubt that &lsquo;the existence of a taking should turn on the type of governmental entity responsible for the taking. . . . Until we decide this issue, property owners and local governments are left uncertain about what legal standard governs legislative ordinances and whether cities can legislatively impose exactions that would not pass muster if done administratively.&rdquo; Ultimately, however, Justice Thomas determined that California Building Industry Association did not provide an opportunity to decide the conflict: &ldquo;The City raises threshold questions about the timeliness of the petition for certiorari that might preclude us from reaching the Takings Clause question. Moreover, petitioner disclaimed any reliance on Nollan and Dolan in the proceedings below. Nor did the California Supreme Court&rsquo;s decision rest on the distinction (if any) between takings effectuated through administrative versus legislative action.&rdquo; The denial of certiorari leaves in place similar &ldquo;inclusionary&rdquo; affordable housing programs that have been adopted in more than 170 California municipalities. www.kattenlaw.com AUSTIN | CENTURYâ€¯ CITY | CHARLOTTE | CHICAGO | HOUSTON | IRVING | LONDON | LOSâ€¯ ANGELES | NEWâ€¯ YORK | ORANGEâ€¯ COUNTY | SANâ€¯ FRANCISCOâ€¯ BAYâ€¯ AREA | SHANGHAI | WASHINGTON,â€¯ DC Attorney advertising. Published as a source of information only. The material contained herein is not to be construed as legal advice or opinion. &copy;2016 Katten Muchin Rosenman LLP. All rights reserved. Katten refers to Katten Muchin Rosenman LLP and the affiliated partnership as explained at kattenlaw.com/disclaimer. 3/9/16