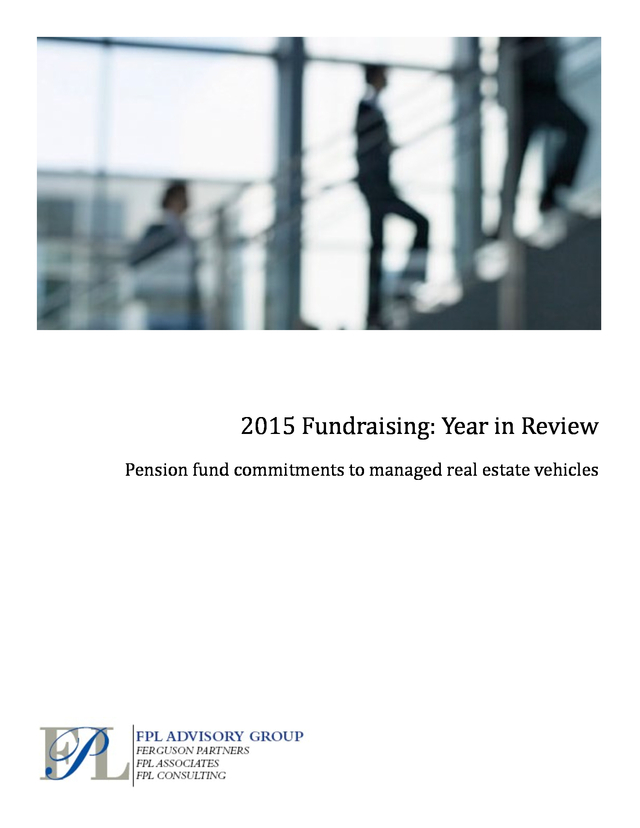 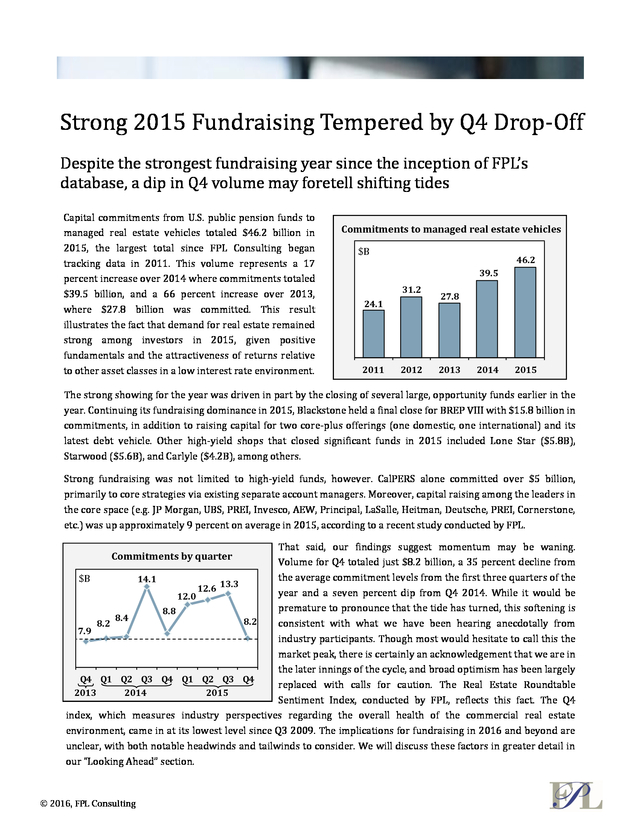 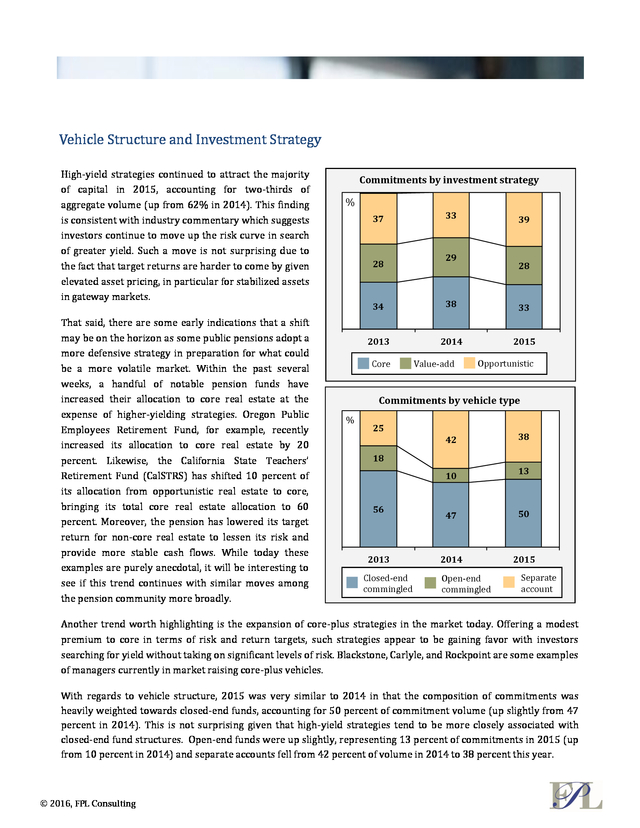 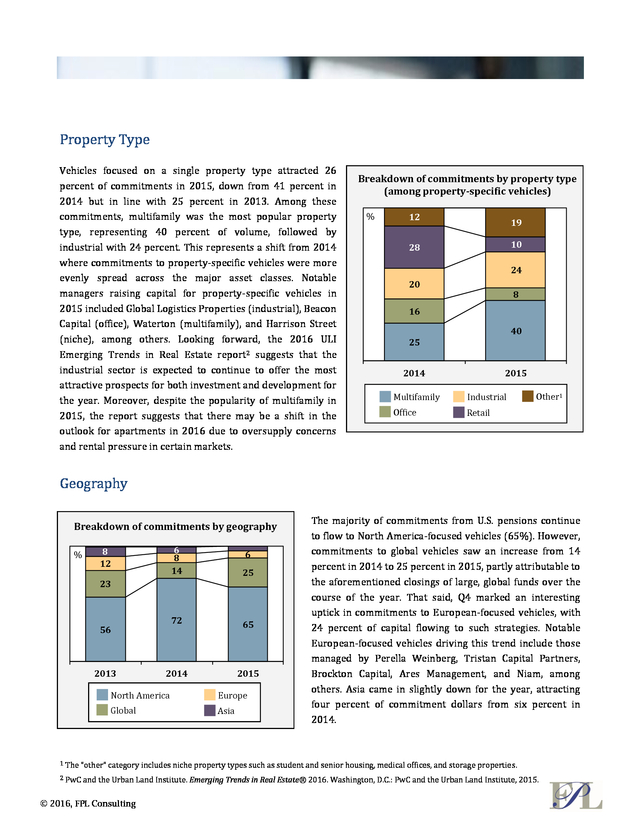 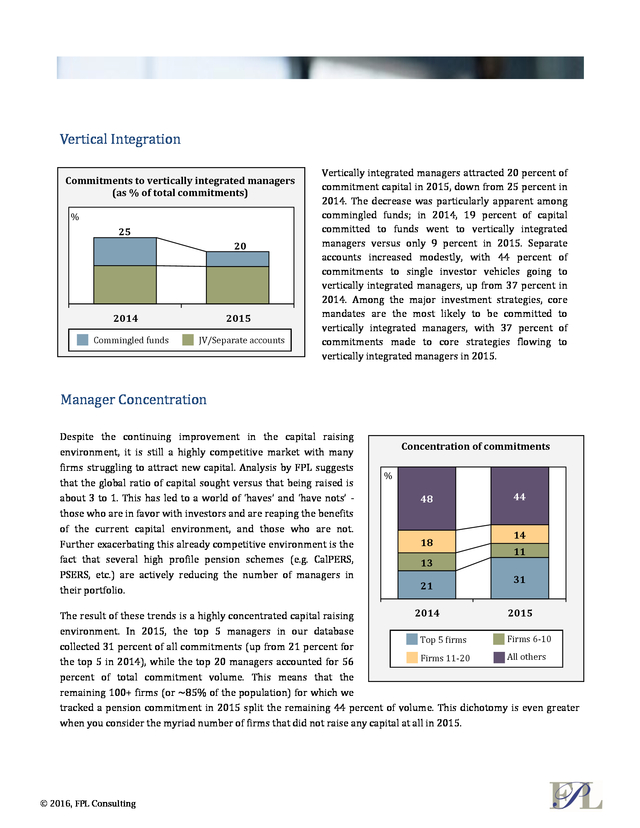 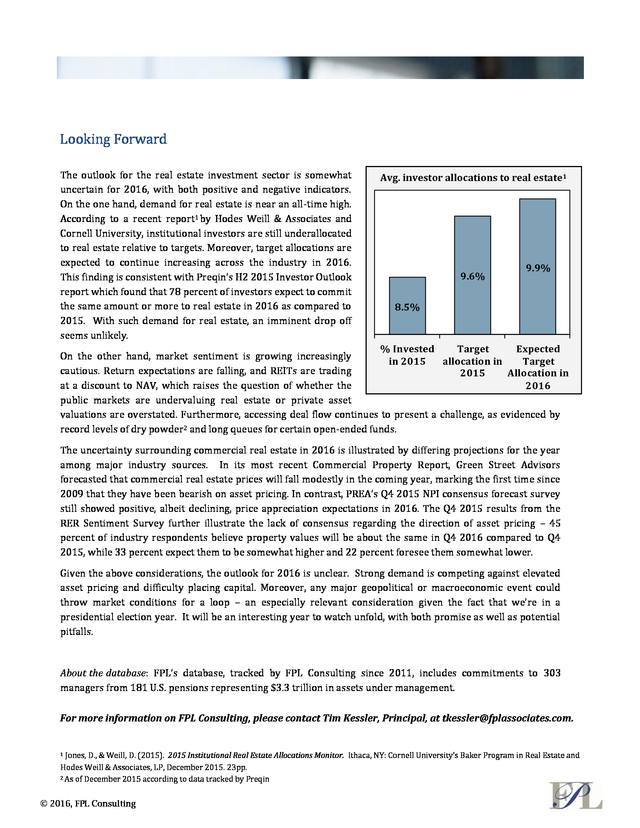 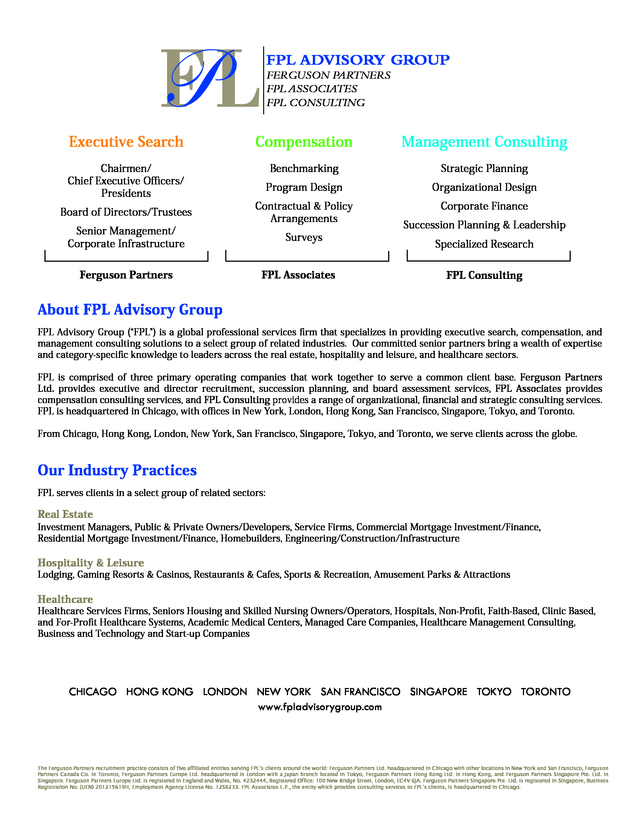 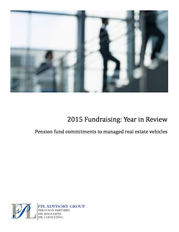 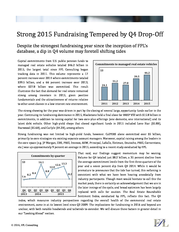 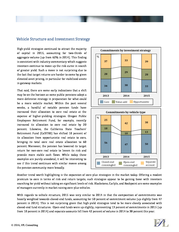 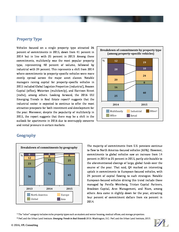 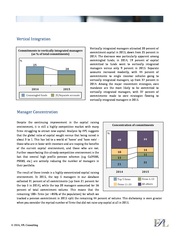 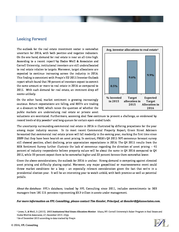 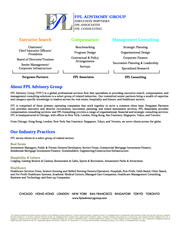 2) Strong 2015 Fundraising Tempered by Q4 Drop-Off Despite the strongest fundraising year since the inception of FPL&rsquo;s database, a dip in Q4 volume may foretell shifting tides Capital commitments from U.S. public pension funds to managed real estate vehicles totaled $46.2 billion in 2015, the largest total since FPL Consulting began tracking data in 2011. This volume represents a 17 percent increase over 2014 where commitments totaled $39.5 billion, and a 66 percent increase over 2013, where $27.8 billion was committed. This result illustrates the fact that demand for real estate remained strong among investors in 2015, given positive fundamentals and the attractiveness of returns relative to other asset classes in a low interest rate environment. Commitments to managed real estate vehicles $B 46.2 39.5 31.2 24.1 2011 2012 27.8 2013 2014 2015 The strong showing for the year was driven in part by the closing of several large, opportunity funds earlier in the year. Continuing its fundraising dominance in 2015, Blackstone held a final close for BREP VIII with $15.8 billion in commitments, in addition to raising capital for two core-plus offerings (one domestic, one international) and its latest debt vehicle. Other high-yield shops that closed significant funds in 2015 included Lone Star ($5.8B), Starwood ($5.6B), and Carlyle ($4.2B), among others. Strong fundraising was not limited to high-yield funds, however. CalPERS alone committed over $5 billion, primarily to core strategies via existing separate account managers. Moreover, capital raising among the leaders in the core space (e.g. JP Morgan, UBS, PREI, Invesco, AEW, Principal, LaSalle, Heitman, Deutsche, PREI, Cornerstone, etc.) was up approximately 9 percent on average in 2015, according to a recent study conducted by FPL. That said, our findings suggest momentum may be waning. Volume for Q4 totaled just $8.2 billion, a 35 percent decline from the average commitment levels from the first three quarters of the $B 14.1 $B 12.6 13.3 year and a seven percent dip from Q4 2014. While it would be 12.0 premature to pronounce that the tide has turned, this softening is 8.8 8.4 8.2 8.2 consistent with what we have been hearing anecdotally from 7.9 industry participants. Though most would hesitate to call this the market peak, there is certainly an acknowledgement that we are in the later innings of the cycle, and broad optimism has been largely Q4 Q1 Q2 Q3 Q4 Q1 Q2 Q3 Q4 replaced with calls for caution. The Real Estate Roundtable 2013 2014 2015 Sentiment Index, conducted by FPL, reflects this fact. The Q4 index, which measures industry perspectives regarding the overall health of the commercial real estate environment, came in at its lowest level since Q3 2009. The implications for fundraising in 2016 and beyond are unclear, with both notable headwinds and tailwinds to consider. We will discuss these factors in greater detail in our &ldquo;Looking Ahead&rdquo; section. Commitments by quarter &copy; 2016, FPL Consulting

3) Vehicle Structure and Investment Strategy High-yield strategies continued to attract the majority of capital in 2015, accounting for two-thirds of aggregate volume (up from 62% in 2014). This finding is consistent with industry commentary which suggests investors continue to move up the risk curve in search of greater yield. Such a move is not surprising due to the fact that target returns are harder to come by given elevated asset pricing, in particular for stabilized assets in gateway markets. That said, there are some early indications that a shift may be on the horizon as some public pensions adopt a more defensive strategy in preparation for what could be a more volatile market. Within the past several weeks, a handful of notable pension funds have increased their allocation to core real estate at the expense of higher-yielding strategies. Oregon Public Employees Retirement Fund, for example, recently increased its allocation to core real estate by 20 percent. Likewise, the California State Teachers&rsquo; Retirement Fund (CalSTRS) has shifted 10 percent of its allocation from opportunistic real estate to core, bringing its total core real estate allocation to 60 percent. Moreover, the pension has lowered its target return for non-core real estate to lessen its risk and provide more stable cash flows. While today these examples are purely anecdotal, it will be interesting to see if this trend continues with similar moves among the pension community more broadly. Commitments by investment strategy % 37 28 33 39 29 28 34 38 33 2013 2014 2015 Core Value-add Opportunistic Commitments by vehicle type % 25 42 38 10 13 47 50 2014 2015 18 56 2013 Closed-end commingled Open-end commingled Separate account Another trend worth highlighting is the expansion of core-plus strategies in the market today. Offering a modest premium to core in terms of risk and return targets, such strategies appear to be gaining favor with investors searching for yield without taking on significant levels of risk. Blackstone, Carlyle, and Rockpoint are some examples of managers currently in market raising core-plus vehicles. With regards to vehicle structure, 2015 was very similar to 2014 in that the composition of commitments was heavily weighted towards closed-end funds, accounting for 50 percent of commitment volume (up slightly from 47 percent in 2014). This is not surprising given that high-yield strategies tend to be more closely associated with closed-end fund structures. Open-end funds were up slightly, representing 13 percent of commitments in 2015 (up from 10 percent in 2014) and separate accounts fell from 42 percent of volume in 2014 to 38 percent this year. &copy; 2016, FPL Consulting

4) Property Type Vehicles focused on a single property type attracted 26 percent of commitments in 2015, down from 41 percent in 2014 but in line with 25 percent in 2013. Among these commitments, multifamily was the most popular property type, representing 40 percent of volume, followed by industrial with 24 percent. This represents a shift from 2014 where commitments to property-specific vehicles were more evenly spread across the major asset classes. Notable managers raising capital for property-specific vehicles in 2015 included Global Logistics Properties (industrial), Beacon Capital (office), Waterton (multifamily), and Harrison Street (niche), among others. Looking forward, the 2016 ULI Emerging Trends in Real Estate report2 suggests that the industrial sector is expected to continue to offer the most attractive prospects for both investment and development for the year. Moreover, despite the popularity of multifamily in 2015, the report suggests that there may be a shift in the outlook for apartments in 2016 due to oversupply concerns and rental pressure in certain markets. Breakdown of commitments by property type (among property-specific vehicles) % 12 19 10 28 24 20 8 16 40 25 2014 2015 Multifamily Industrial Office Other1 Retail Geography Breakdown of commitments by geography % 6 8 14 25 72 65 2014 2015 8 12 6 23 56 2013 North America Europe Global Asia The majority of commitments from U.S. pensions continue to flow to North America-focused vehicles (65%). However, commitments to global vehicles saw an increase from 14 percent in 2014 to 25 percent in 2015, partly attributable to the aforementioned closings of large, global funds over the course of the year. That said, Q4 marked an interesting uptick in commitments to European-focused vehicles, with 24 percent of capital flowing to such strategies. Notable European-focused vehicles driving this trend include those managed by Perella Weinberg, Tristan Capital Partners, Brockton Capital, Ares Management, and Niam, among others. Asia came in slightly down for the year, attracting four percent of commitment dollars from six percent in 2014. 1 The &ldquo;other&rdquo; category includes niche property types such as student and senior housing, medical offices, and storage properties. 2 PwC and the Urban Land Institute. Emerging Trends in Real Estate&reg; 2016. Washington, D.C.: PwC and the Urban Land Institute, 2015. &copy; 2016, FPL Consulting

6) Looking Forward The outlook for the real estate investment sector is somewhat uncertain for 2016, with both positive and negative indicators. On the one hand, demand for real estate is near an all-time high. According to a recent report1 by Hodes Weill &amp; Associates and Cornell University, institutional investors are still underallocated to real estate relative to targets. Moreover, target allocations are expected to continue increasing across the industry in 2016. This finding is consistent with Preqin&rsquo;s H2 2015 Investor Outlook report which found that 78 percent of investors expect to commit the same amount or more to real estate in 2016 as compared to 2015. With such demand for real estate, an imminent drop off seems unlikely. Avg. investor allocations to real estate1 9.6% 9.9% 8.5% % Invested Target Expected On the other hand, market sentiment is growing increasingly in 2015 allocation in Target cautious. Return expectations are falling, and REITs are trading 2015 Allocation in at a discount to NAV, which raises the question of whether the 2016 public markets are undervaluing real estate or private asset valuations are overstated. Furthermore, accessing deal flow continues to present a challenge, as evidenced by record levels of dry powder2 and long queues for certain open-ended funds. The uncertainty surrounding commercial real estate in 2016 is illustrated by differing projections for the year among major industry sources. In its most recent Commercial Property Report, Green Street Advisors forecasted that commercial real estate prices will fall modestly in the coming year, marking the first time since 2009 that they have been bearish on asset pricing. In contrast, PREA&rsquo;s Q4 2015 NPI consensus forecast survey still showed positive, albeit declining, price appreciation expectations in 2016. The Q4 2015 results from the RER Sentiment Survey further illustrate the lack of consensus regarding the direction of asset pricing &ndash; 45 percent of industry respondents believe property values will be about the same in Q4 2016 compared to Q4 2015, while 33 percent expect them to be somewhat higher and 22 percent foresee them somewhat lower. Given the above considerations, the outlook for 2016 is unclear. Strong demand is competing against elevated asset pricing and difficulty placing capital. Moreover, any major geopolitical or macroeconomic event could throw market conditions for a loop &ndash; an especially relevant consideration given the fact that we&rsquo;re in a presidential election year. It will be an interesting year to watch unfold, with both promise as well as potential pitfalls. About the database: FPL&rsquo;s database, tracked by FPL Consulting since 2011, includes commitments to 303 managers from 181 U.S. pensions representing $3.3 trillion in assets under management. For more information on FPL Consulting, please contact Tim Kessler, Principal, at tkessler@fplassociates.com. Jones, D., &amp; Weill, D. (2015). 2015 Institutional Real Estate Allocations Monitor. Ithaca, NY: Cornell University&rsquo;s Baker Program in Real Estate and Hodes Weill &amp; Associates, LP, December 2015. 23pp. 2 As of December 2015 according to data tracked by Preqin 1 &copy; 2016, FPL Consulting