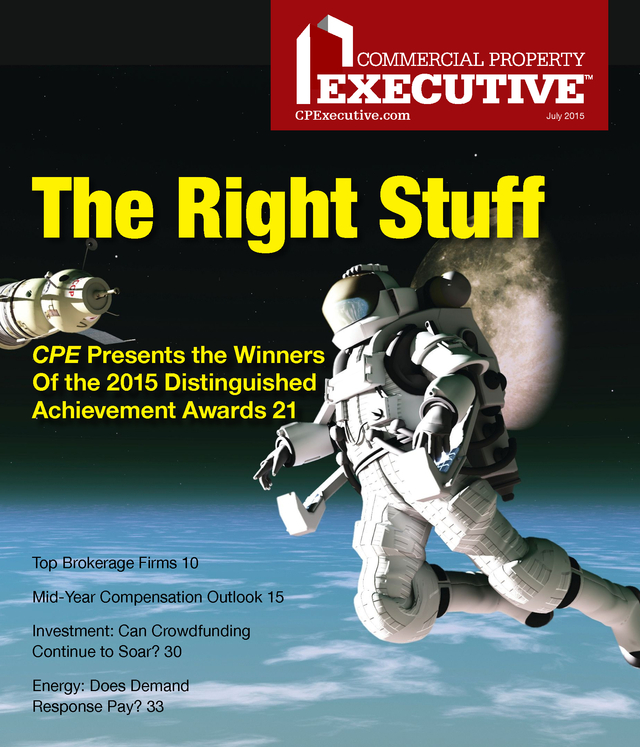 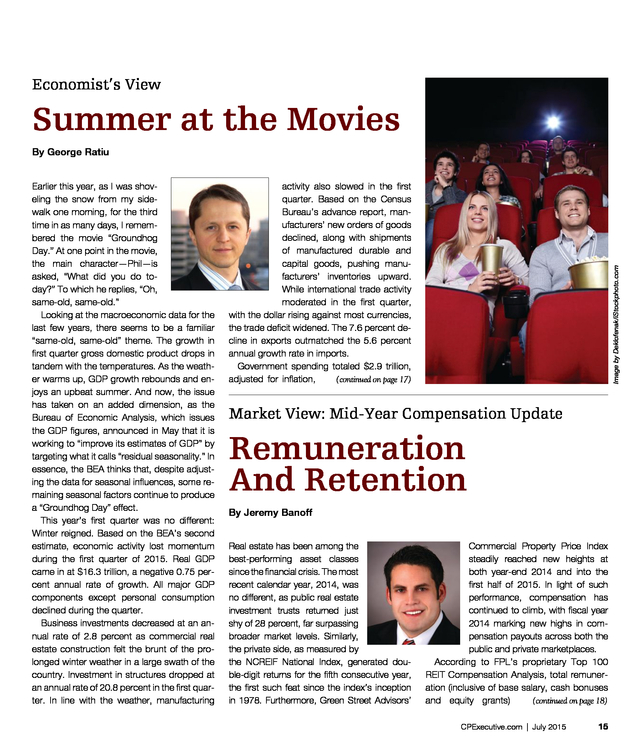 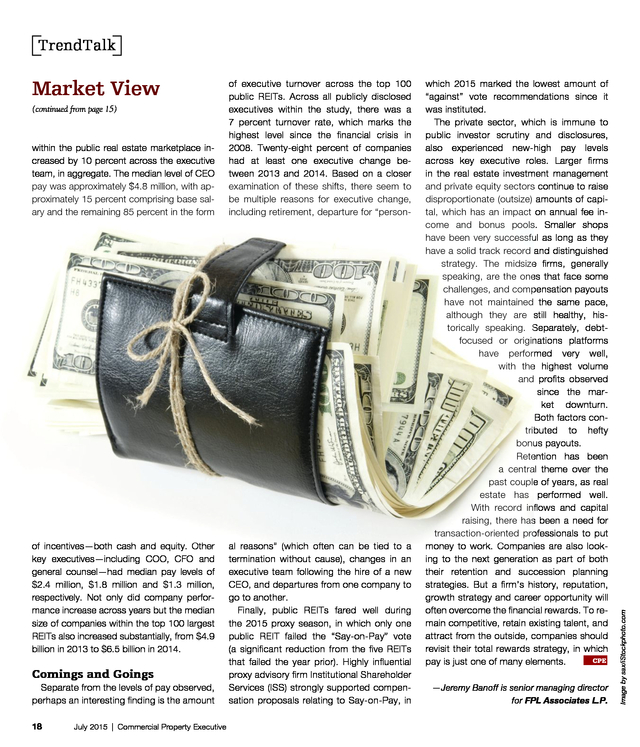 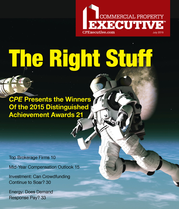 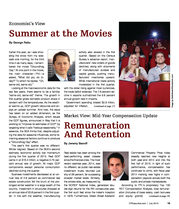 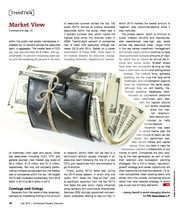 2) Economist&rsquo;s View Summer at the Movies By George Ratiu activity also slowed in the first quarter. Based on the Census Bureau&rsquo;s advance report, manufacturers&rsquo; new orders of goods declined, along with shipments of manufactured durable and capital goods, pushing manufacturers&rsquo; inventories upward. While international trade activity moderated in the first quarter, with the dollar rising against most currencies, the trade deficit widened. The 7.6 percent decline in exports outmatched the 5.6 percent annual growth rate in imports. Government spending totaled $2.9 trillion, adjusted for inflation, (continued on page 17) Image by Deklofenak/iStockphoto.com Earlier this year, as I was shoveling the snow from my sidewalk one morning, for the third time in as many days, I remembered the movie &ldquo;Groundhog Day.&rdquo; At one point in the movie, the main character&mdash;Phil&mdash;is asked, &ldquo;What did you do today?&rdquo; To which he replies, &ldquo;Oh, same-old, same-old.&rdquo; Looking at the macroeconomic data for the last few years, there seems to be a familiar &ldquo;same-old, same-old&rdquo; theme. The growth in first quarter gross domestic product drops in tandem with the temperatures. As the weather warms up, GDP growth rebounds and enjoys an upbeat summer. And now, the issue has taken on an added dimension, as the Bureau of Economic Analysis, which issues the GDP figures, announced in May that it is working to &ldquo;improve its estimates of GDP&rdquo; by targeting what it calls &ldquo;residual seasonality.&rdquo; In essence, the BEA thinks that, despite adjusting the data for seasonal influences, some remaining seasonal factors continue to produce a &ldquo;Groundhog Day&rdquo; effect. This year&rsquo;s first quarter was no different: Winter reigned. Based on the BEA&rsquo;s second estimate, economic activity lost momentum during the first quarter of 2015. Real GDP came in at $16.3 trillion, a negative 0.75 percent annual rate of growth. All major GDP components except personal consumption declined during the quarter. Business investments decreased at an annual rate of 2.8 percent as commercial real estate construction felt the brunt of the prolonged winter weather in a large swath of the country. Investment in structures dropped at an annual rate of 20.8 percent in the first quarter. In line with the weather, manufacturing Market View: Mid-Year Compensation Update Remuneration And Retention By Jeremy Banoff Real estate has been among the best-performing asset classes since the financial crisis. The most recent calendar year, 2014, was no different, as public real estate investment trusts returned just shy of 28 percent, far surpassing broader market levels. Similarly, the private side, as measured by the NCREIF National Index, generated double-digit returns for the fifth consecutive year, the first such feat since the index&rsquo;s inception in 1978. Furthermore, Green Street Advisors&rsquo; Commercial Property Price Index steadily reached new heights at both year-end 2014 and into the first half of 2015. In light of such performance, compensation has continued to climb, with fiscal year 2014 marking new highs in compensation payouts across both the public and private marketplaces. According to FPL&rsquo;s proprietary Top 100 REIT Compensation Analysis, total remuneration (inclusive of base salary, cash bonuses and equity grants) (continued on page 18) CPExecutive.com | July 2015 15

3) Market View (continued from page 15) within the public real estate marketplace increased by 10 percent across the executive team, in aggregate. The median level of CEO pay was approximately $4.8 million, with approximately 15 percent comprising base salary and the remaining 85 percent in the form of incentives&mdash;both cash and equity. Other key executives&mdash;including COO, CFO and general counsel&mdash;had median pay levels of $2.4 million, $1.8 million and $1.3 million, respectively. Not only did company performance increase across years but the median size of companies within the top 100 largest REITs also increased substantially, from $4.9 billion in 2013 to $6.5 billion in 2014. Comings and Goings Separate from the levels of pay observed, perhaps an interesting finding is the amount 18 July 2015 | Commercial Property Executive of executive turnover across the top 100 public REITs. Across all publicly disclosed executives within the study, there was a 7 percent turnover rate, which marks the highest level since the financial crisis in 2008. Twenty-eight percent of companies had at least one executive change between 2013 and 2014. Based on a closer examination of these shifts, there seem to be multiple reasons for executive change, including retirement, departure for &ldquo;person- al reasons&rdquo; (which often can be tied to a termination without cause), changes in an executive team following the hire of a new CEO, and departures from one company to go to another. Finally, public REITs fared well during the 2015 proxy season, in which only one public REIT failed the &ldquo;Say-on-Pay&rdquo; vote (a significant reduction from the five REITs that failed the year prior). Highly influential proxy advisory firm Institutional Shareholder Services (ISS) strongly supported compensation proposals relating to Say-on-Pay, in which 2015 marked the lowest amount of &ldquo;against&rdquo; vote recommendations since it was instituted. The private sector, which is immune to public investor scrutiny and disclosures, also experienced new-high pay levels across key executive roles. Larger firms in the real estate investment management and private equity sectors continue to raise disproportionate (outsize) amounts of capital, which has an impact on annual fee income and bonus pools. Smaller shops have been very successful as long as they have a solid track record and distinguished strategy. The midsize firms, generally speaking, are the ones that face some challenges, and compensation payouts have not maintained the same pace, although they are still healthy, historically speaking. Separately, debtfocused or originations platforms have performed very well, with the highest volume and profits observed since the market downturn. Both factors contributed to hefty bonus payouts. Retention has been a central theme over the past couple of years, as real estate has performed well. With record inflows and capital raising, there has been a need for transaction-oriented professionals to put money to work. Companies are also looking to the next generation as part of both their retention and succession planning strategies. But a firm&rsquo;s history, reputation, growth strategy and career opportunity will often overcome the financial rewards. To remain competitive, retain existing talent, and attract from the outside, companies should revisit their total rewards strategy, in which pay is just one of many elements. &mdash;Jeremy Banoff is senior managing director for FPL Associates L.P. Image by sax/iStockphoto.com TrendTalk