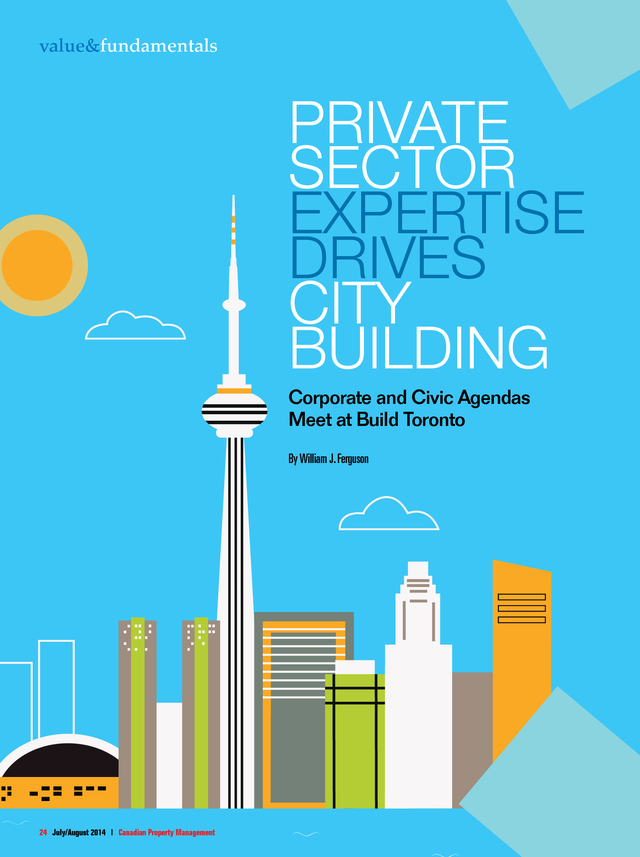 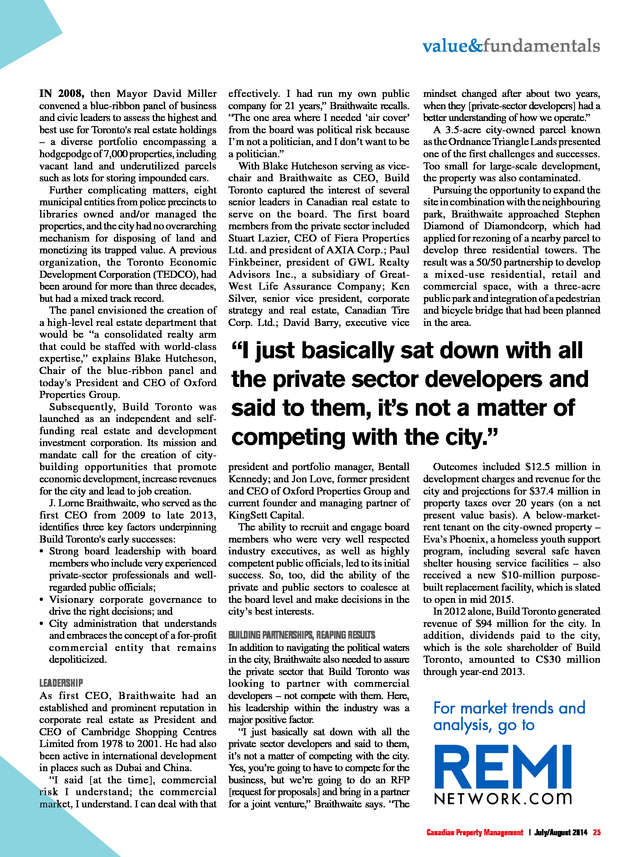 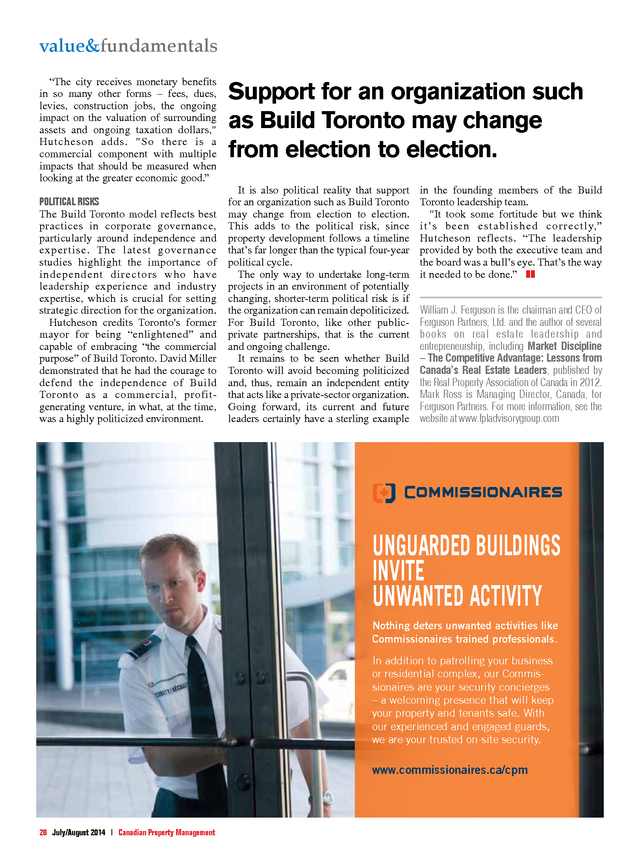 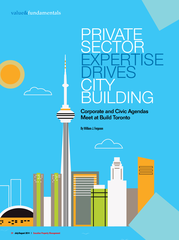 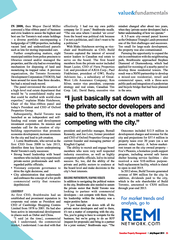 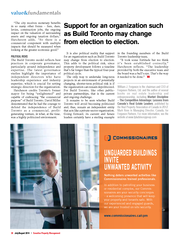 2) value&amp;fundamentals IN 2008, then Mayor David Miller convened a blue-ribbon panel of business and civic leaders to assess the highest and best use for Toronto's real estate holdings &ndash; a diverse portfolio encompassing a hodgepodge of 7,000 properties, including vacant land and underutilized parcels such as lots for storing impounded cars. Further complicating matters, eight municipal entities from police precincts to libraries owned and/or managed the properties, and the city had no overarching mechanism for disposing of land and monetizing its trapped value. A previous organization, the Toronto Economic Development Corporation (TEDCO), had been around for more than three decades, but had a mixed track record. The panel envisioned the creation of a high-level real estate department that would be &ldquo;a consolidated realty arm that could be staffed with world-class expertise,&rdquo; explains Blake Hutcheson, Chair of the blue-ribbon panel and today's President and CEO of Oxford Properties Group. Subsequently, Build Toronto was launched as an independent and selffunding real estate and development investment corporation. Its mission and mandate call for the creation of citybuilding opportunities that promote economic development, increase revenues for the city and lead to job creation. J. Lorne Braithwaite, who served as the first CEO from 2009 to late 2013, identifies three key factors underpinning Build Toronto's early successes: &bull; Strong board leadership with board members who include very experienced private-sector professionals and wellregarded public officials; &bull; Visionary corporate governance to drive the right decisions; and &bull; City administration that understands and embraces the concept of a for-profit commercial entity that remains depoliticized. LEADERSHIP As first CEO, Braithwaite had an established and prominent reputation in corporate real estate as President and CEO of Cambridge Shopping Centres Limited from 1978 to 2001. He had also been active in international development in places such as Dubai and China. &ldquo;I said [at the time], commercial risk I understand; the commercial market, I understand. I can deal with that effectively. I had run my own public company for 21 years,&rdquo; Braithwaite recalls. &ldquo;The one area where I needed &lsquo;air cover&rsquo; from the board was political risk because I&rsquo;m not a politician, and I don&rsquo;t want to be a politician.&rdquo; With Blake Hutcheson serving as vicechair and Braithwaite as CEO, Build Toronto captured the interest of several senior leaders in Canadian real estate to serve on the board. The first board members from the private sector included Stuart Lazier, CEO of Fiera Properties Ltd. and president of AXIA Corp.; Paul Finkbeiner, president of GWL Realty Advisors Inc., a subsidiary of GreatWest Life Assurance Company; Ken Silver, senior vice president, corporate strategy and real estate, Canadian Tire Corp. Ltd.; David Barry, executive vice mindset changed after about two years, when they [private-sector developers] had a better understanding of how we operate.&rdquo; A 3.5-acre city-owned parcel known as the Ordnance Triangle Lands presented one of the first challenges and successes. Too small for large-scale development, the property was also contaminated. Pursuing the opportunity to expand the site in combination with the neighbouring park, Braithwaite approached Stephen Diamond of Diamondcorp, which had applied for rezoning of a nearby parcel to develop three residential towers. The result was a 50/50 partnership to develop a mixed-use residential, retail and commercial space, with a three-acre public park and integration of a pedestrian and bicycle bridge that had been planned in the area. &ldquo;I just basically sat down with all the private sector developers and said to them, it&rsquo;s not a matter of competing with the city.&rdquo; president and portfolio manager, Bentall Kennedy; and Jon Love, former president and CEO of Oxford Properties Group and current founder and managing partner of KingSett Capital. The ability to recruit and engage board members who were very well respected industry executives, as well as highly competent public officials, led to its initial success. So, too, did the ability of the private and public sectors to coalesce at the board level and make decisions in the city&rsquo;s best interests. BUILDING PARTNERSHIPS, REAPING RESULTS In addition to navigating the political waters in the city, Braithwaite also needed to assure the private sector that Build Toronto was looking to partner with commercial developers &ndash; not compete with them. Here, his leadership within the industry was a major positive factor. &ldquo;I just basically sat down with all the private sector developers and said to them, it&rsquo;s not a matter of competing with the city. Yes, you&rsquo;re going to have to compete for the business, but we&rsquo;re going to do an RFP [request for proposals] and bring in a partner for a joint venture,&rdquo; Braithwaite says. &ldquo;The Outcomes included $12.5 million in development charges and revenue for the city and projections for $37.4 million in property taxes over 20 years (on a net present value basis). A below-marketrent tenant on the city-owned property &ndash; Eva&rsquo;s Phoenix, a homeless youth support program, including several safe haven shelter housing service facilities &ndash; also received a new $10-million purposebuilt replacement facility, which is slated to open in mid 2015. In 2012 alone, Build Toronto generated revenue of $94 million for the city. In addition, dividends paid to the city, which is the sole shareholder of Build Toronto, amounted to C$30 million through year-end 2013. For market trends and analysis, go to Canadian Property Management | July/August 2014 25

3) value&amp;fundamentals &ldquo;The city receives monetary benefits in so many other forms &ndash; fees, dues, levies, construction jobs, the ongoing impact on the valuation of surrounding assets and ongoing taxation dollars,&quot; Hutcheson adds. &quot;So there is a commercial component with multiple impacts that should be measured when looking at the greater economic good.&rdquo; POLITICAL RISKS The Build Toronto model reflects best practices in corporate governance, particularly around independence and expertise. The latest governance studies highlight the importance of independent directors who have leadership experience and industry expertise, which is crucial for setting strategic direction for the organization. Hutcheson credits Toronto's former mayor for being &ldquo;enlightened&rdquo; and capable of embracing &ldquo;the commercial purpose&rdquo; of Build Toronto. David Miller demonstrated that he had the courage to defend the independence of Build Toronto as a commercial, profitgenerating venture, in what, at the time, was a highly politicized environment. Support for an organization such as Build Toronto may change from election to election. It is also political reality that support for an organization such as Build Toronto may change from election to election. This adds to the political risk, since property development follows a timeline that&rsquo;s far longer than the typical four-year political cycle. The only way to undertake long-term projects in an environment of potentially changing, shorter-term political risk is if the organization can remain depoliticized. For Build Toronto, like other publicprivate partnerships, that is the current and ongoing challenge. It remains to be seen whether Build Toronto will avoid becoming politicized and, thus, remain an independent entity that acts like a private-sector organization. Going forward, its current and future leaders certainly have a sterling example in the founding members of the Build Toronto leadership team. &quot;It took some fortitude but we think it&rsquo;s been established correctly,&rdquo; Hutcheson reflects. &ldquo;The leadership provided by both the executive team and the board was a bull&rsquo;s eye. That&rsquo;s the way it needed to be done.&rdquo; zz William J. Ferguson is the chairman and CEO of Ferguson Partners, Ltd. and the author of several books on real estate leadership and entrepreneurship, including Market Discipline &ndash; The Competitive Advantage: Lessons from Canada&rsquo;s Real Estate Leaders, published by the Real Property Association of Canada in 2012. Mark Ross is Managing Director, Canada, for Ferguson Partners. For more information, see the website at www.fpladvisorygroup.com UNGUARDED BUILDINGS INVITE UNWANTED ACTIVITY Nothing deters unwanted activities like Commissionaires trained professionals. In addition to patrolling your business or residential complex, our Commissionaires are your security concierges &ndash; a welcoming presence that will keep your property and tenants safe. With our experienced and engaged guards, we are your trusted on-site security. www.commissionaires.ca/cpm 26 July/August 2014 | Canadian Property Management