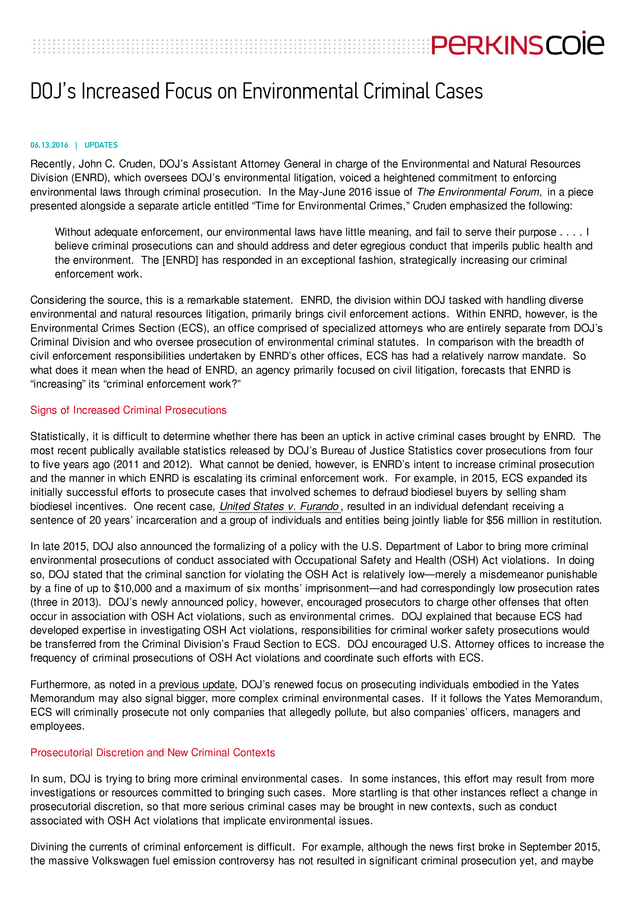 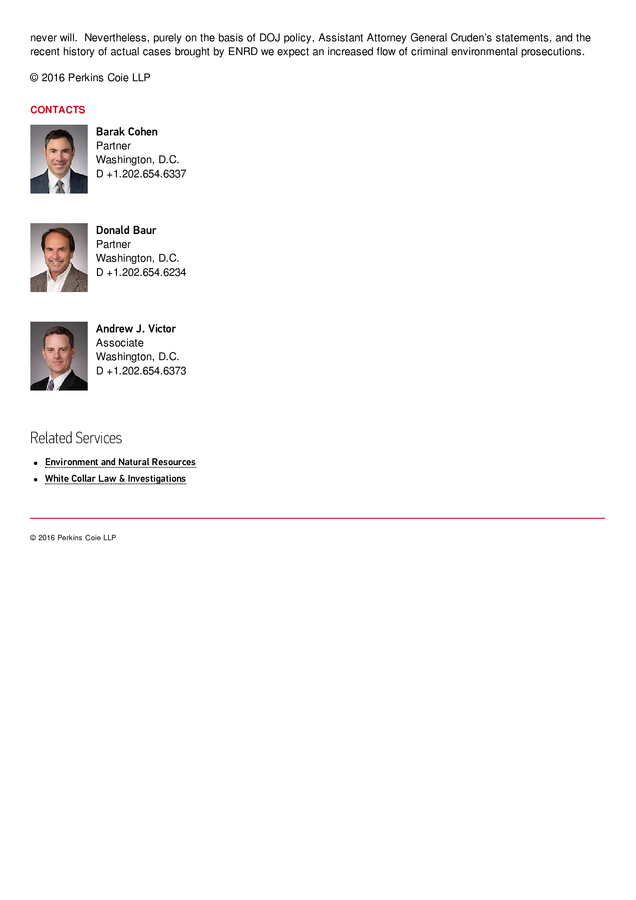 1) DOJ&rsquo;s Increased Focus on Environmental Criminal Cases 06.13.2016 | UPDATES Recently, John C. Cruden, DOJ&rsquo;s Assistant Attorney General in charge of the Environmental and Natural Resources Division (ENRD), which oversees DOJ&rsquo;s environmental litigation, voiced a heightened commitment to enforcing environmental laws through criminal prosecution. In the May-June 2016 issue of The Environmental Forum, in a piece presented alongside a separate article entitled &ldquo;Time for Environmental Crimes,&rdquo; Cruden emphasized the following: Without adequate enforcement, our environmental laws have little meaning, and fail to serve their purpose . . . . I believe criminal prosecutions can and should address and deter egregious conduct that imperils public health and the environment. The [ENRD] has responded in an exceptional fashion, strategically increasing our criminal enforcement work. Considering the source, this is a remarkable statement. ENRD, the division within DOJ tasked with handling diverse environmental and natural resources litigation, primarily brings civil enforcement actions. Within ENRD, however, is the Environmental Crimes Section (ECS), an office comprised of specialized attorneys who are entirely separate from DOJ&rsquo;s Criminal Division and who oversee prosecution of environmental criminal statutes. In comparison with the breadth of civil enforcement responsibilities undertaken by ENRD&rsquo;s other offices, ECS has had a relatively narrow mandate. So what does it mean when the head of ENRD, an agency primarily focused on civil litigation, forecasts that ENRD is &ldquo;increasing&rdquo; its &ldquo;criminal enforcement work?&rdquo; Signs of Increased Criminal Prosecutions Statistically, it is difficult to determine whether there has been an uptick in active criminal cases brought by ENRD. The most recent publically available statistics released by DOJ&rsquo;s Bureau of Justice Statistics cover prosecutions from four to five years ago (2011 and 2012). What cannot be denied, however, is ENRD&rsquo;s intent to increase criminal prosecution and the manner in which ENRD is escalating its criminal enforcement work. For example, in 2015, ECS expanded its initially successful efforts to prosecute cases that involved schemes to defraud biodiesel buyers by selling sham biodiesel incentives. One recent case, United States v. Furando , resulted in an individual defendant receiving a sentence of 20 years&rsquo; incarceration and a group of individuals and entities being jointly liable for $56 million in restitution. In late 2015, DOJ also announced the formalizing of a policy with the U.S. Department of Labor to bring more criminal environmental prosecutions of conduct associated with Occupational Safety and Health (OSH) Act violations. In doing so, DOJ stated that the criminal sanction for violating the OSH Act is relatively low&mdash;merely a misdemeanor punishable by a fine of up to $10,000 and a maximum of six months&rsquo; imprisonment&mdash;and had correspondingly low prosecution rates (three in 2013). DOJ&rsquo;s newly announced policy, however, encouraged prosecutors to charge other offenses that often occur in association with OSH Act violations, such as environmental crimes. DOJ explained that because ECS had developed expertise in investigating OSH Act violations, responsibilities for criminal worker safety prosecutions would be transferred from the Criminal Division&rsquo;s Fraud Section to ECS. DOJ encouraged U.S. Attorney offices to increase the frequency of criminal prosecutions of OSH Act violations and coordinate such efforts with ECS. Furthermore, as noted in a previous update, DOJ&rsquo;s renewed focus on prosecuting individuals embodied in the Yates Memorandum may also signal bigger, more complex criminal environmental cases. If it follows the Yates Memorandum, ECS will criminally prosecute not only companies that allegedly pollute, but also companies&rsquo; officers, managers and employees. Prosecutorial Discretion and New Criminal Contexts In sum, DOJ is trying to bring more criminal environmental cases. In some instances, this effort may result from more investigations or resources committed to bringing such cases. More startling is that other instances reflect a change in prosecutorial discretion, so that more serious criminal cases may be brought in new contexts, such as conduct associated with OSH Act violations that implicate environmental issues. Divining the currents of criminal enforcement is difficult. For example, although the news first broke in September 2015, the massive Volkswagen fuel emission controversy has not resulted in significant criminal prosecution yet, and maybe