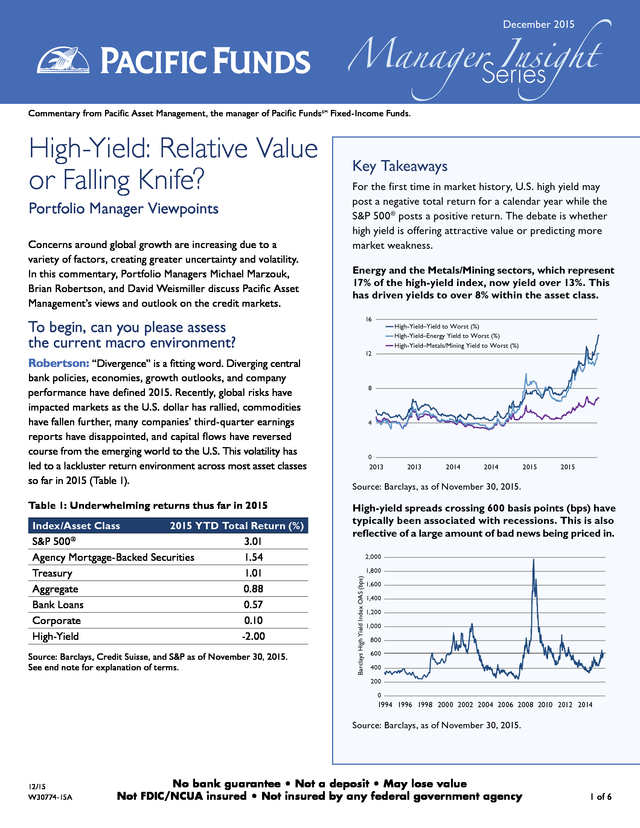 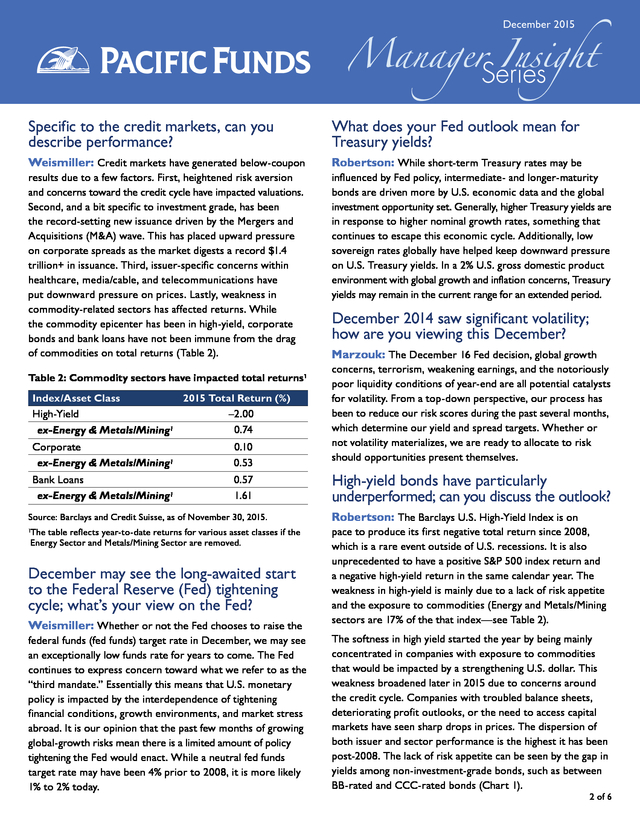 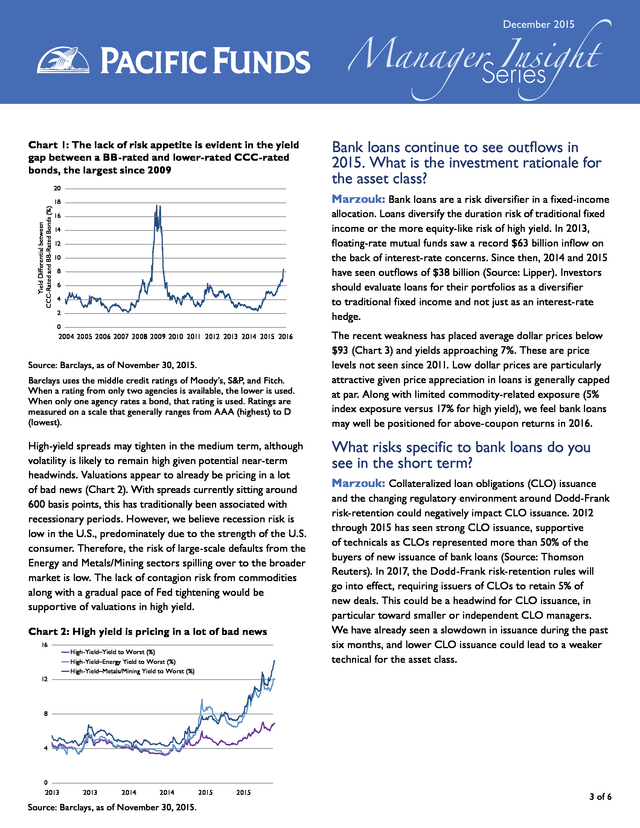 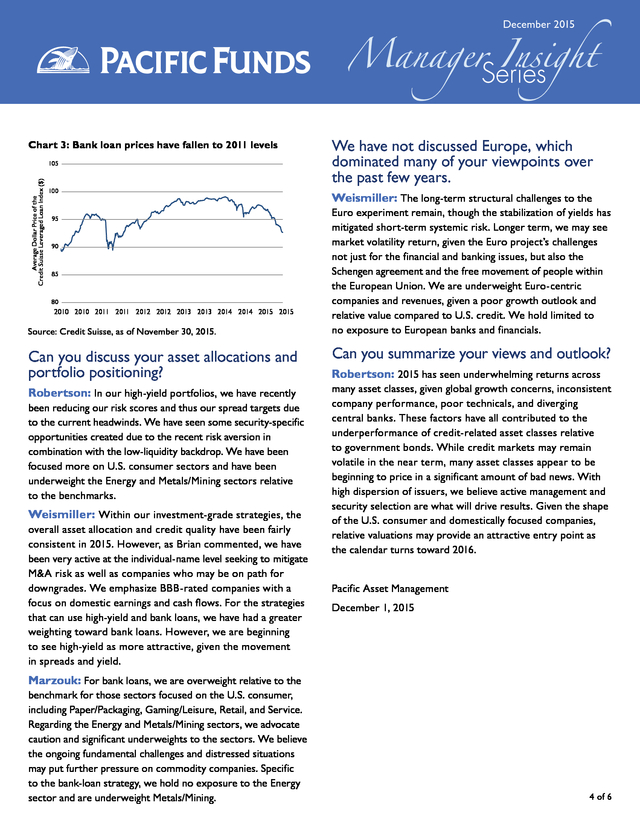 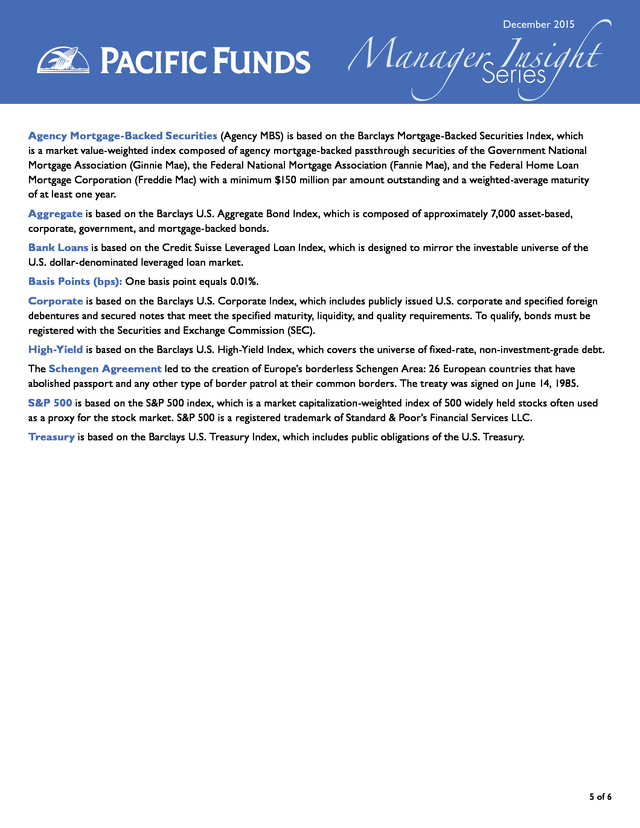 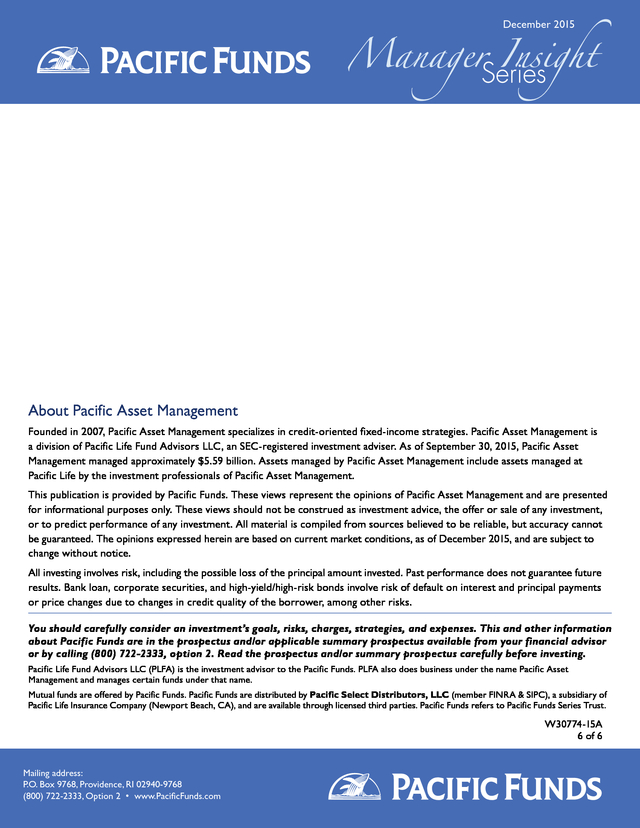 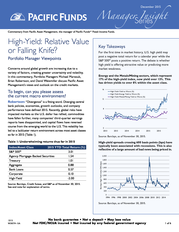 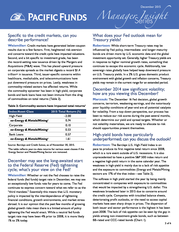 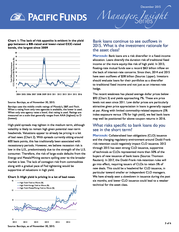 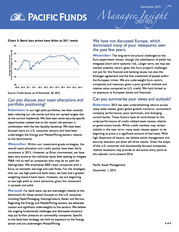 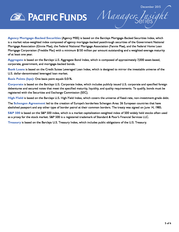 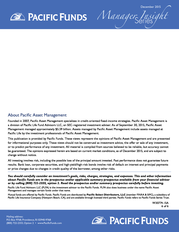 1) December 2015 Commentary from Pacific Asset Management, the manager of Pacific Funds SM Fixed-Income Funds. High-Yield: Relative Value or Falling Knife? Portfolio Manager Viewpoints Concerns around global growth are increasing due to a variety of factors, creating greater uncertainty and volatility. In this commentary, Portfolio Managers Michael Marzouk, Brian Robertson, and David Weismiller discuss Pacific Asset Management&rsquo;s views and outlook on the credit markets. Key Takeaways For the first time in market history, U.S. high yield may post a negative total return for a calendar year while the S&amp;P 500 &reg; posts a positive return. The debate is whether high yield is offering attractive value or predicting more market weakness. Energy and the Metals/Mining sectors, which represent 17% of the high-yield index, now yield over 13%. This has driven yields to over 8% within the asset class. 16 To begin, can you please assess the current macro environment? 12 Robertson: &ldquo;Divergence&rdquo; is a fitting word. Diverging central Table 1: Underwhelming returns thus far in 2015 Index/Asset Class 2015 YTD Total Return (%) S&amp;P 500 Agency Mortgage-Backed Securities Treasury Aggregate Bank Loans Corporate High-Yield &reg; 3.01 1.54 1.01 0.88 0.57 0.10 -2.00 Source: Barclays, Credit Suisse, and S&amp;P as of November 30, 2015. See end note for explanation of terms. 8 4 0 2013 2013 2014 2014 2015 2015 Source: Barclays, as of November 30, 2015. High-yield spreads crossing 600 basis points (bps) have typically been associated with recessions. This is also reflective of a large amount of bad news being priced in. 2,000 1,800 Barclays High Yield Index OAS (bps) bank policies, economies, growth outlooks, and company performance have defined 2015. Recently, global risks have impacted markets as the U.S. dollar has rallied, commodities have fallen further, many companies&rsquo; third-quarter earnings reports have disappointed, and capital flows have reversed course from the emerging world to the U.S. This volatility has led to a lackluster return environment across most asset classes so far in 2015 (Table 1). High-Yield&ndash;Yield to Worst (%) High-Yield&ndash;Energy Yield to Worst (%) High-Yield&ndash;Metals/Mining Yield to Worst (%) 1,600 1,400 1,200 1,000 800 600 400 200 0 1994 1996 1998 2000 2002 2004 2006 2008 2010 2012 2014 Source: Barclays, as of November 30, 2015. 12/15 W30774-15A No bank guarantee &bull; Not a deposit &bull; May lose value Not FDIC/NCUA insured &bull; Not insured by any federal government agency 1 of 6

2) December 2015 Specific to the credit markets, can you describe performance? What does your Fed outlook mean for Treasury yields? Weismiller: Credit markets have generated below-coupon Robertson: While short-term Treasury rates may be results due to a few factors. First, heightened risk aversion and concerns toward the credit cycle have impacted valuations. Second, and a bit specific to investment grade, has been the record-setting new issuance driven by the Mergers and Acquisitions (M&amp;A) wave. This has placed upward pressure on corporate spreads as the market digests a record $1.4 trillion+ in issuance. Third, issuer-specific concerns within healthcare, media/cable, and telecommunications have put downward pressure on prices. Lastly, weakness in commodity-related sectors has affected returns. While the commodity epicenter has been in high-yield, corporate bonds and bank loans have not been immune from the drag of commodities on total returns (Table 2). influenced by Fed policy, intermediate- and longer-maturity bonds are driven more by U.S. economic data and the global investment opportunity set. Generally, higher Treasury yields are in response to higher nominal growth rates, something that continues to escape this economic cycle. Additionally, low sovereign rates globally have helped keep downward pressure on U.S. Treasury yields. In a 2% U.S. gross domestic product environment with global growth and inflation concerns, Treasury yields may remain in the current range for an extended period. Table 2: Commodity sectors have impacted total returns1 Index/Asset Class 2015 Total Return (%) High-Yield ex-Energy &amp; Metals/Mining1 &ndash;2.00 0.74 Corporate ex-Energy &amp; Metals/Mining1 0.10 0.53 Bank Loans ex-Energy &amp; Metals/Mining1 0.57 1.61 December 2014 saw significant volatility; how are you viewing this December? Marzouk: The December 16 Fed decision, global growth concerns, terrorism, weakening earnings, and the notoriously poor liquidity conditions of year-end are all potential catalysts for volatility. From a top-down perspective, our process has been to reduce our risk scores during the past several months, which determine our yield and spread targets. Whether or not volatility materializes, we are ready to allocate to risk should opportunities present themselves. High-yield bonds have particularly underperformed; can you discuss the outlook? Source: Barclays and Credit Suisse, as of November 30, 2015. Robertson: The Barclays U.S. High-Yield Index is on T  he table reflects year-to-date returns for various asset classes if the Energy Sector and Metals/Mining Sector are removed. pace to produce its first negative total return since 2008, which is a rare event outside of U.S. recessions. It is also unprecedented to have a positive S&amp;P 500 index return and a negative high-yield return in the same calendar year. The weakness in high-yield is mainly due to a lack of risk appetite and the exposure to commodities (Energy and Metals/Mining sectors are 17% of the that index&mdash;see Table 2). 1 December may see the long-awaited start to the Federal Reserve (Fed) tightening cycle; what&rsquo;s your view on the Fed? Weismiller: Whether or not the Fed chooses to raise the federal funds (fed funds) target rate in December, we may see an exceptionally low funds rate for years to come. The Fed continues to express concern toward what we refer to as the &ldquo;third mandate.&rdquo; Essentially this means that U.S. monetary policy is impacted by the interdependence of tightening financial conditions, growth environments, and market stress abroad. It is our opinion that the past few months of growing global-growth risks mean there is a limited amount of policy tightening the Fed would enact. While a neutral fed funds target rate may have been 4% prior to 2008, it is more likely 1% to 2% today. The softness in high yield started the year by being mainly concentrated in companies with exposure to commodities that would be impacted by a strengthening U.S. dollar. This weakness broadened later in 2015 due to concerns around the credit cycle. Companies with troubled balance sheets, deteriorating profit outlooks, or the need to access capital markets have seen sharp drops in prices. The dispersion of both issuer and sector performance is the highest it has been post-2008. The lack of risk appetite can be seen by the gap in yields among non-investment-grade bonds, such as between BB-rated and CCC-rated bonds (Chart 1). 2 of 6

3) December 2015 Chart 1: The lack of risk appetite is evident in the yield gap between a BB-rated and lower-rated CCC-rated bonds, the largest since 2009 20 Marzouk: Bank loans are a risk diversifier in a fixed-income Yield Differential between CCC-Rated and BB-Rated Bonds (%) 18 allocation. Loans diversify the duration risk of traditional fixed income or the more equity-like risk of high yield. In 2013, floating-rate mutual funds saw a record $63 billion inflow on the back of interest-rate concerns. Since then, 2014 and 2015 have seen outflows of $38 billion (Source: Lipper). Investors should evaluate loans for their portfolios as a diversifier to traditional fixed income and not just as an interest-rate hedge. 16 14 12 10 8 6 4 2 0 2004 2005 2006 2007 2008 2009 2010 2011 2012 2013 2014 2015 2016 Source: Barclays, as of November 30, 2015. Barclays uses the middle credit ratings of Moody&rsquo;s, S&amp;P, and Fitch. When a rating from only two agencies is available, the lower is used. When only one agency rates a bond, that rating is used. Ratings are measured on a scale that generally ranges from AAA (highest) to D (lowest). High-yield spreads may tighten in the medium term, although volatility is likely to remain high given potential near-term headwinds. Valuations appear to already be pricing in a lot of bad news (Chart 2). With spreads currently sitting around 600 basis points, this has traditionally been associated with recessionary periods. However, we believe recession risk is low in the U.S., predominately due to the strength of the U.S. consumer. Therefore, the risk of large-scale defaults from the Energy and Metals/Mining sectors spilling over to the broader market is low. The lack of contagion risk from commodities along with a gradual pace of Fed tightening would be supportive of valuations in high yield. Chart 2: High yield is pricing in a lot of bad news 16 Bank loans continue to see outflows in 2015. What is the investment rationale for the asset class? High-Yield&ndash;Yield to Worst (%) High-Yield&ndash;Energy Yield to Worst (%) High-Yield&ndash;Metals/Mining Yield to Worst (%) The recent weakness has placed average dollar prices below $93 (Chart 3) and yields approaching 7%. These are price levels not seen since 2011. Low dollar prices are particularly attractive given price appreciation in loans is generally capped at par. Along with limited commodity-related exposure (5% index exposure versus 17% for high yield), we feel bank loans may well be positioned for above-coupon returns in 2016. What risks specific to bank loans do you see in the short term? Marzouk: Collateralized loan obligations (CLO) issuance and the changing regulatory environment around Dodd-Frank risk-retention could negatively impact CLO issuance. 2012 through 2015 has seen strong CLO issuance, supportive of technicals as CLOs represented more than 50% of the buyers of new issuance of bank loans (Source: Thomson Reuters). In 2017, the Dodd-Frank risk-retention rules will go into effect, requiring issuers of CLOs to retain 5% of new deals. This could be a headwind for CLO issuance, in particular toward smaller or independent CLO managers. We have already seen a slowdown in issuance during the past six months, and lower CLO issuance could lead to a weaker technical for the asset class. 12 8 4 0 2013 2013 2014 2014 Source: Barclays, as of November 30, 2015. 2015 2015 3 of 6

4) December 2015 Chart 3: Bank loan prices have fallen to 2011 levels Average Dollar Price of the Credit Suisse Leveraged Loan Index ($) 105 100 95 90 85 80 2010 2010 2011 2011 2012 2012 2013 2013 2014 2014 2015 2015 Source: Credit Suisse, as of November 30, 2015. We have not discussed Europe, which dominated many of your viewpoints over the past few years. Weismiller: The long-term structural challenges to the Euro experiment remain, though the stabilization of yields has mitigated short-term systemic risk. Longer term, we may see market volatility return, given the Euro project&rsquo;s challenges not just for the financial and banking issues, but also the Schengen agreement and the free movement of people within the European Union. We are underweight Euro-centric companies and revenues, given a poor growth outlook and relative value compared to U.S. credit. We hold limited to no exposure to European banks and financials. Can you discuss your asset allocations and portfolio positioning? Can you summarize your views and outlook? Robertson: In our high-yield portfolios, we have recently many asset classes, given global growth concerns, inconsistent company performance, poor technicals, and diverging central banks. These factors have all contributed to the underperformance of credit-related asset classes relative to government bonds. While credit markets may remain volatile in the near term, many asset classes appear to be beginning to price in a significant amount of bad news. With high dispersion of issuers, we believe active management and security selection are what will drive results. Given the shape of the U.S. consumer and domestically focused companies, relative valuations may provide an attractive entry point as the calendar turns toward 2016. been reducing our risk scores and thus our spread targets due to the current headwinds. We have seen some security-specific opportunities created due to the recent risk aversion in combination with the low-liquidity backdrop. We have been focused more on U.S. consumer sectors and have been underweight the Energy and Metals/Mining sectors relative to the benchmarks. Weismiller: Within our investment-grade strategies, the overall asset allocation and credit quality have been fairly consistent in 2015. However, as Brian commented, we have been very active at the individual-name level seeking to mitigate M&amp;A risk as well as companies who may be on path for downgrades. We emphasize BBB-rated companies with a focus on domestic earnings and cash flows. For the strategies that can use high-yield and bank loans, we have had a greater weighting toward bank loans. However, we are beginning to see high-yield as more attractive, given the movement in spreads and yield. Robertson: 2015 has seen underwhelming returns across Pacific Asset Management December 1, 2015 Marzouk: For bank loans, we are overweight relative to the benchmark for those sectors focused on the U.S. consumer, including Paper/Packaging, Gaming/Leisure, Retail, and Service. Regarding the Energy and Metals/Mining sectors, we advocate caution and significant underweights to the sectors. We believe the ongoing fundamental challenges and distressed situations may put further pressure on commodity companies. Specific to the bank-loan strategy, we hold no exposure to the Energy sector and are underweight Metals/Mining. 4 of 6