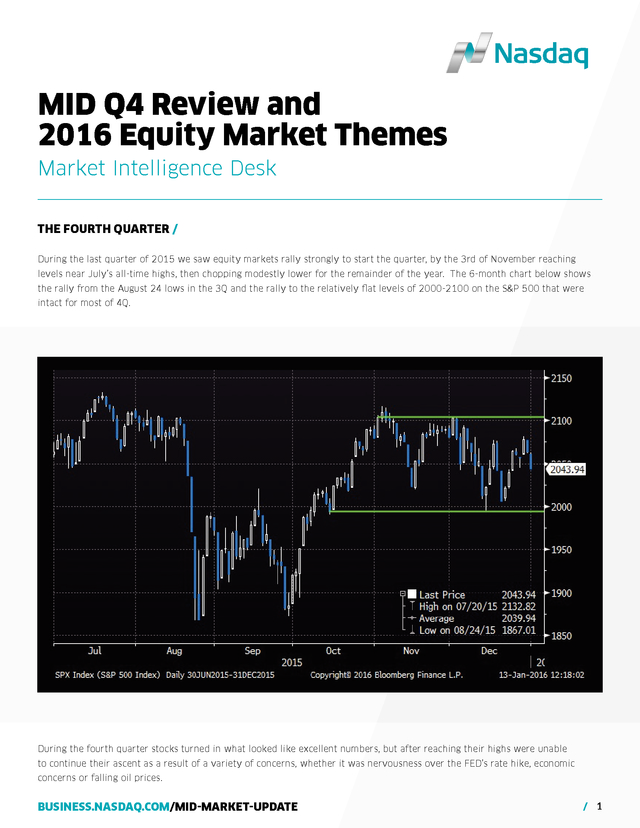 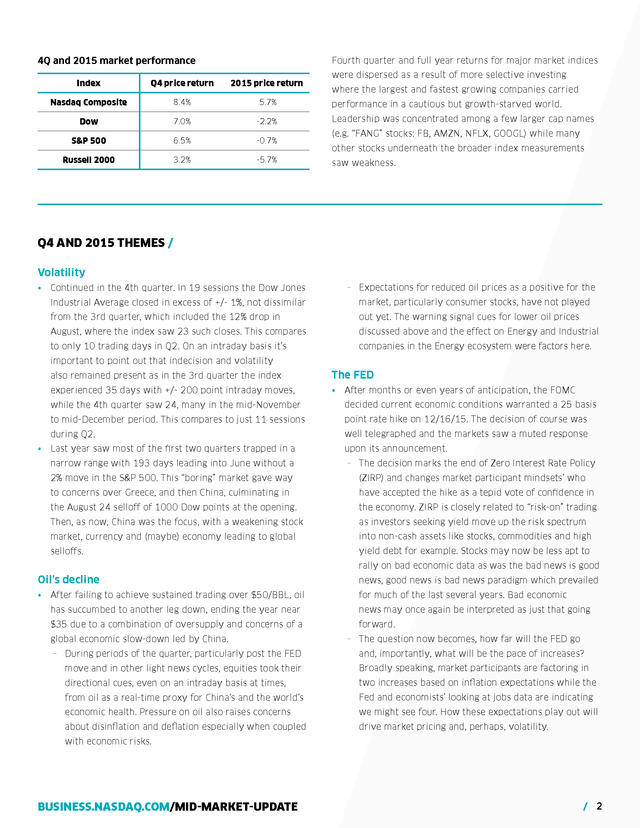 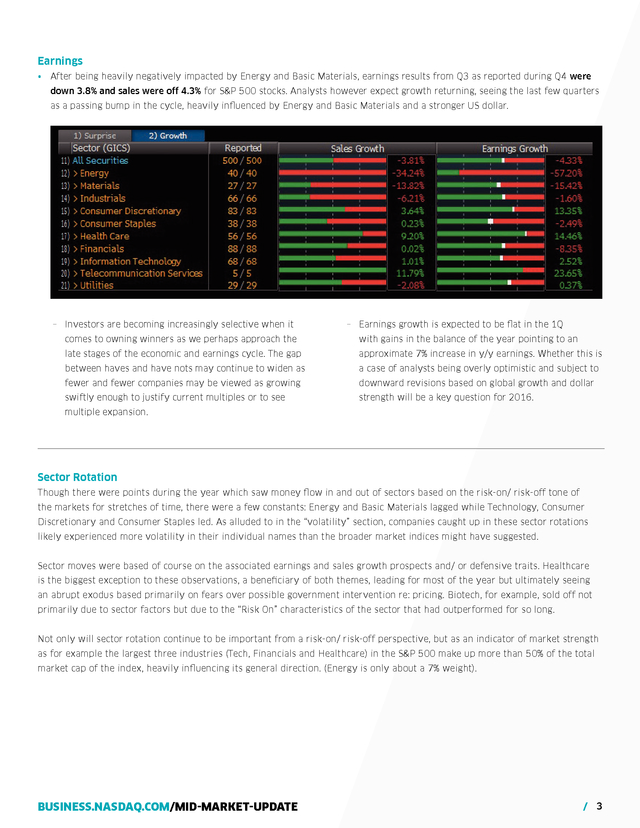 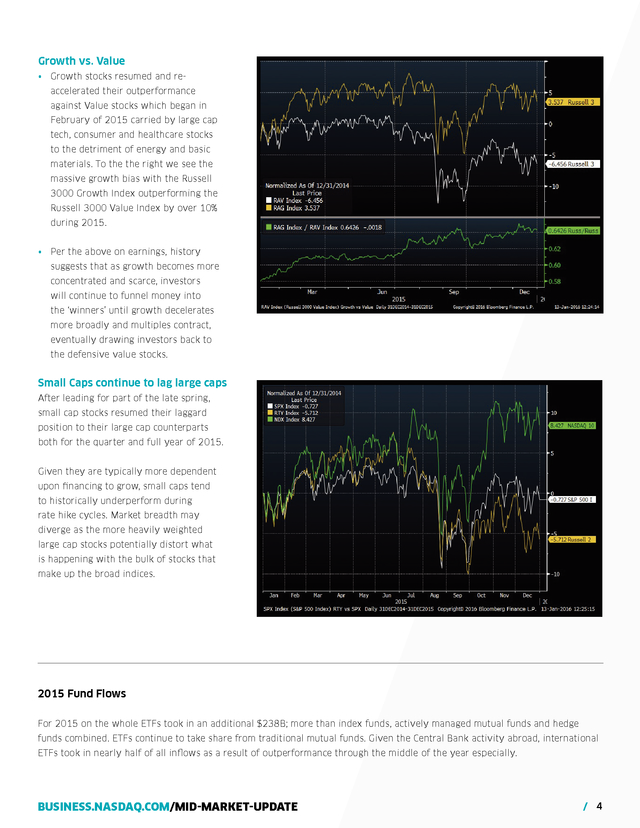 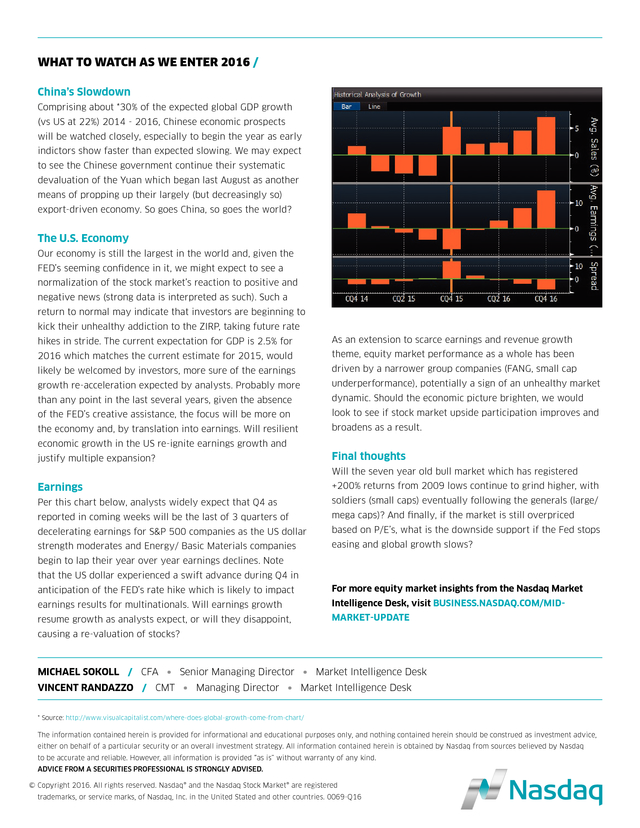 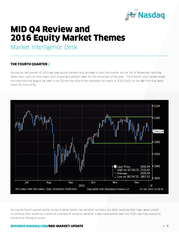 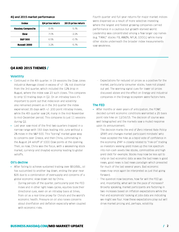 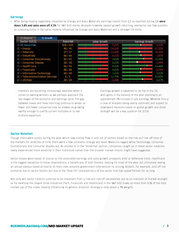 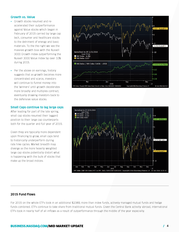 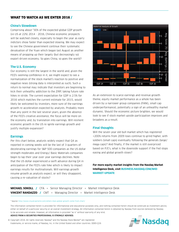 1) MID Q4 Review and 2016 Equity Market Themes Market Intelligence Desk THE FOURTH QUARTER / During the last quarter of 2015 we saw equity markets rally strongly to start the quarter, by the 3rd of November reaching levels near July&rsquo;s all-time highs, then chopping modestly lower for the remainder of the year. The 6-month chart below shows the rally from the August 24 lows in the 3Q and the rally to the relatively flat levels of 2000-2100 on the S&amp;P 500 that were intact for most of 4Q. During the fourth quarter stocks turned in what looked like excellent numbers, but after reaching their highs were unable to continue their ascent as a result of a variety of concerns, whether it was nervousness over the FED&rsquo;s rate hike, economic concerns or falling oil prices. BUSINESS.NASDAQ.COM/MID-MARKET-UPDATE / 1

2) Fourth quarter and full year returns for major market indices 4Q and 2015 market performance Index Q4 price return 2015 price return Nasdaq Composite 8.4% 5.7% Dow 7.0% -2.2% S&amp;P 500 6.5% -0.7% Russell 2000 3.2% -5.7% were dispersed as a result of more selective investing where the largest and fastest growing companies carried performance in a cautious but growth-starved world. Leadership was concentrated among a few larger cap names (e.g. &ldquo;FANG&rdquo; stocks: FB, AMZN, NFLX, GOOGL) while many other stocks underneath the broader index measurements saw weakness. Q4 AND 2015 THEMES / Volatility &bull; Continued in the 4th quarter. In 19 sessions the Dow Jones &ndash;&ndash; Expectations for reduced oil prices as a positive for the Industrial Average closed in excess of +/- 1%, not dissimilar market, particularly consumer stocks, have not played from the 3rd quarter, which included the 12% drop in out yet. The warning signal cues for lower oil prices August, where the index saw 23 such closes. This compares discussed above and the effect on Energy and Industrial to only 10 trading days in Q2. On an intraday basis it&rsquo;s companies in the Energy ecosystem were factors here. important to point out that indecision and volatility also remained present as in the 3rd quarter the index The FED experienced 35 days with +/- 200 point intraday moves, &bull; After months or even years of anticipation, the FOMC while the 4th quarter saw 24, many in the mid-November decided current economic conditions warranted a 25 basis to mid-December period. This compares to just 11 sessions point rate hike on 12/16/15. The decision of course was during Q2. well telegraphed and the markets saw a muted response &bull; Last year saw most of the first two quarters trapped in a upon its announcement. narrow range with 193 days leading into June without a &ndash;&ndash; The decision marks the end of Zero Interest Rate Policy 2% move in the S&amp;P 500. This &ldquo;boring&rdquo; market gave way (ZIRP) and changes market participant mindsets&rsquo; who to concerns over Greece, and then China, culminating in have accepted the hike as a tepid vote of confidence in the August 24 selloff of 1000 Dow points at the opening. the economy. ZIRP is closely related to &ldquo;risk-on&rdquo; trading Then, as now, China was the focus, with a weakening stock as investors seeking yield move up the risk spectrum market, currency and (maybe) economy leading to global into non-cash assets like stocks, commodities and high selloffs. yield debt for example. Stocks may now be less apt to rally on bad economic data as was the bad news is good Oil&rsquo;s decline news, good news is bad news paradigm which prevailed &bull; After failing to achieve sustained trading over $50/BBL, oil for much of the last several years. Bad economic has succumbed to another leg down, ending the year near $35 due to a combination of oversupply and concerns of a global economic slow-down led by China. &ndash;&ndash; During periods of the quarter, particularly post the FED news may once again be interpreted as just that going forward. &ndash;&ndash; The question now becomes, how far will the FED go and, importantly, what will be the pace of increases? move and in other light news cycles, equities took their Broadly speaking, market participants are factoring in directional cues, even on an intraday basis at times, two increases based on inflation expectations while the from oil as a real-time proxy for China&rsquo;s and the world&rsquo;s Fed and economists&rsquo; looking at jobs data are indicating economic health. Pressure on oil also raises concerns we might see four. How these expectations play out will about disinflation and deflation especially when coupled drive market pricing and, perhaps, volatility. with economic risks. BUSINESS.NASDAQ.COM/MID-MARKET-UPDATE / 2

3) Earnings &bull; After being heavily negatively impacted by Energy and Basic Materials, earnings results from Q3 as reported during Q4 were down 3.8% and sales were off 4.3% for S&amp;P 500 stocks. Analysts however expect growth returning, seeing the last few quarters as a passing bump in the cycle, heavily influenced by Energy and Basic Materials and a stronger US dollar. &ndash;&ndash; Investors are becoming increasingly selective when it &ndash;&ndash; Earnings growth is expected to be flat in the 1Q comes to owning winners as we perhaps approach the with gains in the balance of the year pointing to an late stages of the economic and earnings cycle. The gap approximate 7% increase in y/y earnings. Whether this is between haves and have nots may continue to widen as a case of analysts being overly optimistic and subject to fewer and fewer companies may be viewed as growing downward revisions based on global growth and dollar swiftly enough to justify current multiples or to see strength will be a key question for 2016. multiple expansion. Sector Rotation Though there were points during the year which saw money flow in and out of sectors based on the risk-on/ risk-off tone of the markets for stretches of time, there were a few constants: Energy and Basic Materials lagged while Technology, Consumer Discretionary and Consumer Staples led. As alluded to in the &ldquo;volatility&rdquo; section, companies caught up in these sector rotations likely experienced more volatility in their individual names than the broader market indices might have suggested. Sector moves were based of course on the associated earnings and sales growth prospects and/ or defensive traits. Healthcare is the biggest exception to these observations, a beneficiary of both themes, leading for most of the year but ultimately seeing an abrupt exodus based primarily on fears over possible government intervention re: pricing. Biotech, for example, sold off not primarily due to sector factors but due to the &ldquo;Risk On&rdquo; characteristics of the sector that had outperformed for so long. Not only will sector rotation continue to be important from a risk-on/ risk-off perspective, but as an indicator of market strength as for example the largest three industries (Tech, Financials and Healthcare) in the S&amp;P 500 make up more than 50% of the total market cap of the index, heavily influencing its general direction. (Energy is only about a 7% weight). BUSINESS.NASDAQ.COM/MID-MARKET-UPDATE / 3

4) Growth vs. Value &bull; Growth stocks resumed and reaccelerated their outperformance against Value stocks which began in February of 2015 carried by large cap tech, consumer and healthcare stocks to the detriment of energy and basic materials. To the the right we see the massive growth bias with the Russell 3000 Growth Index outperforming the Russell 3000 Value Index by over 10% during 2015. &bull; Per the above on earnings, history suggests that as growth becomes more concentrated and scarce, investors will continue to funnel money into the &lsquo;winners&rsquo; until growth decelerates more broadly and multiples contract, eventually drawing investors back to the defensive value stocks. Small Caps continue to lag large caps After leading for part of the late spring, small cap stocks resumed their laggard position to their large cap counterparts both for the quarter and full year of 2015. Given they are typically more dependent upon financing to grow, small caps tend to historically underperform during rate hike cycles. Market breadth may diverge as the more heavily weighted large cap stocks potentially distort what is happening with the bulk of stocks that make up the broad indices. 2015 Fund Flows For 2015 on the whole ETFs took in an additional $238B; more than index funds, actively managed mutual funds and hedge funds combined. ETFs continue to take share from traditional mutual funds. Given the Central Bank activity abroad, international ETFs took in nearly half of all inflows as a result of outperformance through the middle of the year especially. BUSINESS.NASDAQ.COM/MID-MARKET-UPDATE / 4

5) WHAT TO WATCH AS WE ENTER 2016 / China&rsquo;s Slowdown Comprising about *30% of the expected global GDP growth Stock Market Breadth (vs US at 22%) 2014 - 2016, Chinese economic prospects will be watched closely, especially to begin the year as early indictors show faster than expected slowing. We may expect to see the Chinese government continue their systematic devaluation of the Yuan which began last August as another means of propping up their largely (but decreasingly so) export-driven economy. So goes China, so goes the world? The U.S. Economy Our economy is still the largest in the world and, given the FED&rsquo;s seeming confidence in it, we might expect to see a normalization of the stock market&rsquo;s reaction to positive and negative news (strong data is interpreted as such). Such a return to normal may indicate that investors are beginning to kick their unhealthy addiction to the ZIRP, taking future rate hikes in stride. The current expectation for GDP is 2.5% for As an extension to scarce earnings and revenue growth 2016 which matches the current estimate for 2015, would theme, equity market performance as a whole has been likely be welcomed by investors, more sure of the earnings driven by a narrower group companies (FANG, small cap growth re-acceleration expected by analysts. Probably more underperformance), potentially a sign of an unhealthy market than any point in the last several years, given the absence dynamic. Should the economic picture brighten, we would of the FED&rsquo;s creative assistance, the focus will be more on look to see if stock market upside participation improves and the economy and, by translation into earnings. Will resilient broadens as a result. economic growth in the US re-ignite earnings growth and justify multiple expansion? Final thoughts Will the seven year old bull market which has registered Earnings +200% returns from 2009 lows continue to grind higher, with Per this chart below, analysts widely expect that Q4 as soldiers (small caps) eventually following the generals (large/ reported in coming weeks will be the last of 3 quarters of mega caps)? And finally, if the market is still overpriced decelerating earnings for S&amp;P 500 companies as the US dollar based on P/E&rsquo;s, what is the downside support if the Fed stops strength moderates and Energy/ Basic Materials companies easing and global growth slows? begin to lap their year over year earnings declines. Note that the US dollar experienced a swift advance during Q4 in anticipation of the FED&rsquo;s rate hike which is likely to impact For more equity market insights from the Nasdaq Market earnings results for multinationals. Will earnings growth Intelligence Desk, visit BUSINESS.NASDAQ.COM/MID- resume growth as analysts expect, or will they disappoint, MARKET-UPDATE causing a re-valuation of stocks? MICHAEL SOKOLL / CFA &bull; Senior Managing Director &bull; Market Intelligence Desk VINCENT RANDAZZO / CMT &bull; Managing Director &bull; Market Intelligence Desk * Source: http://www.visualcapitalist.com/where-does-global-growth-come-from-chart/ The information contained herein is provided for informational and educational purposes only, and nothing contained herein should be construed as investment advice, either on behalf of a particular security or an overall investment strategy. All information contained herein is obtained by Nasdaq from sources believed by Nasdaq to be accurate and reliable. However, all information is provided &ldquo;as is&rdquo; without warranty of any kind. ADVICE FROM A SECURITIES PROFESSIONAL IS STRONGLY ADVISED. &copy;  opyright 2016. All rights reserved. Nasdaq&reg; and the Nasdaq Stock Market&reg; are registered C trademarks, or service marks, of Nasdaq, Inc. in the United Stated and other countries. 0069-Q16