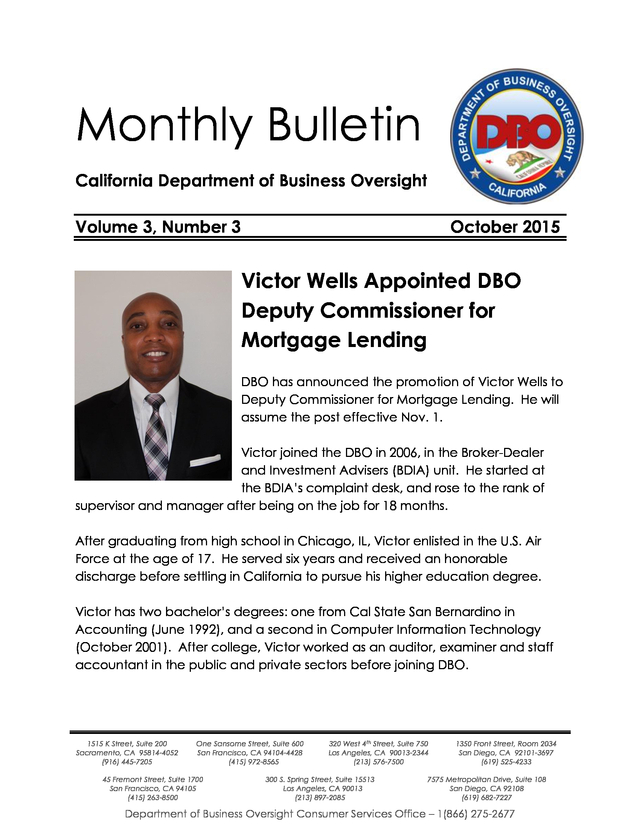 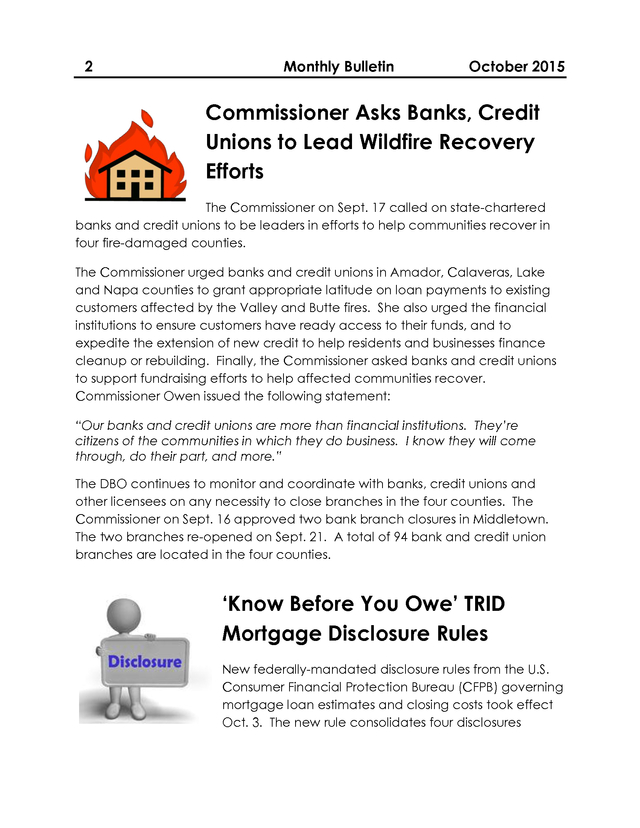 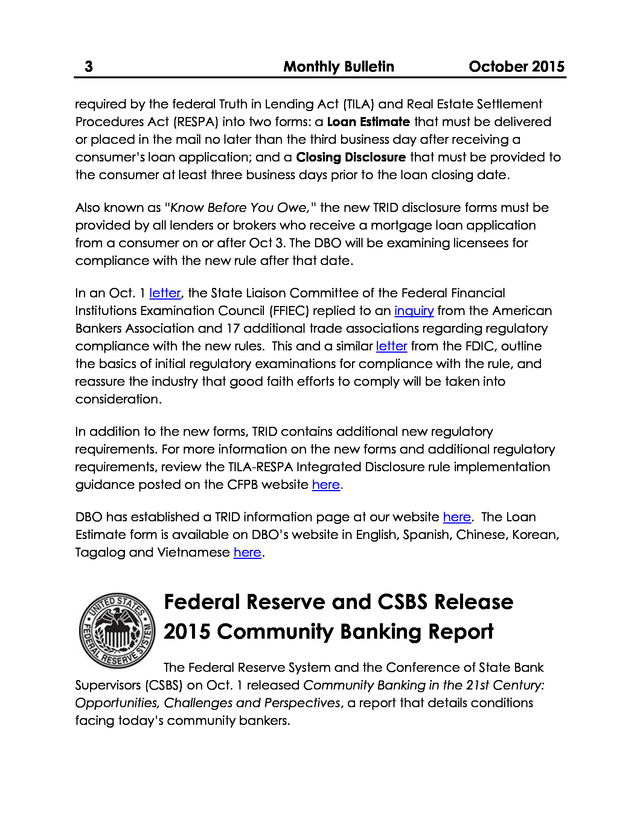 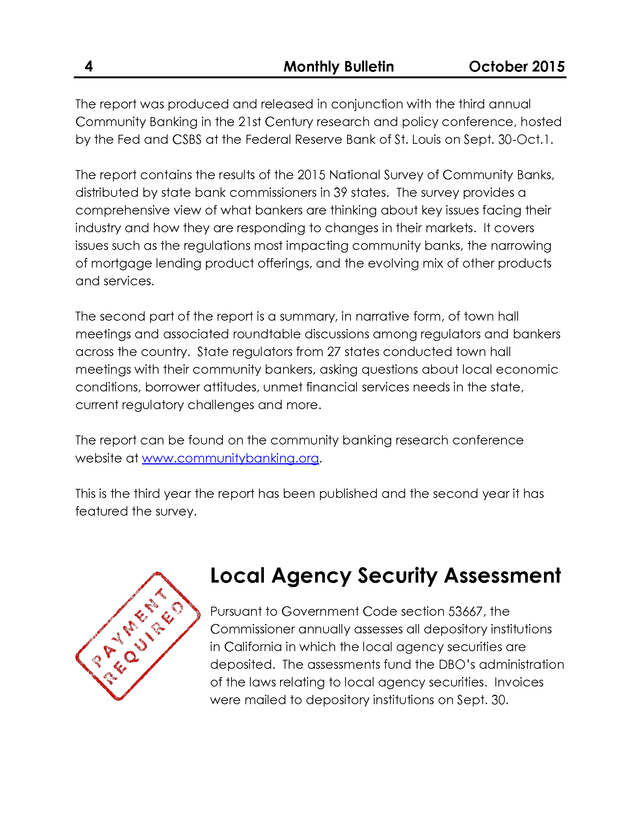 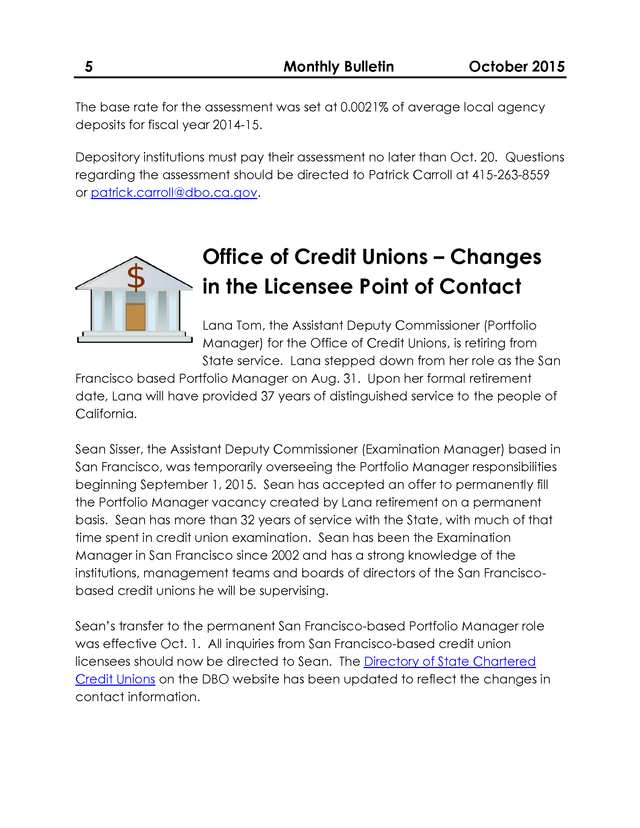 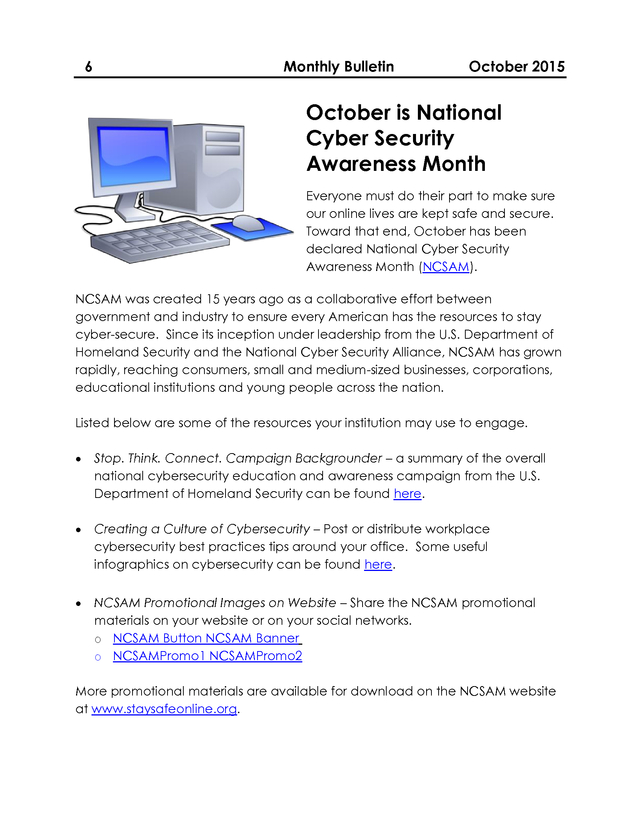 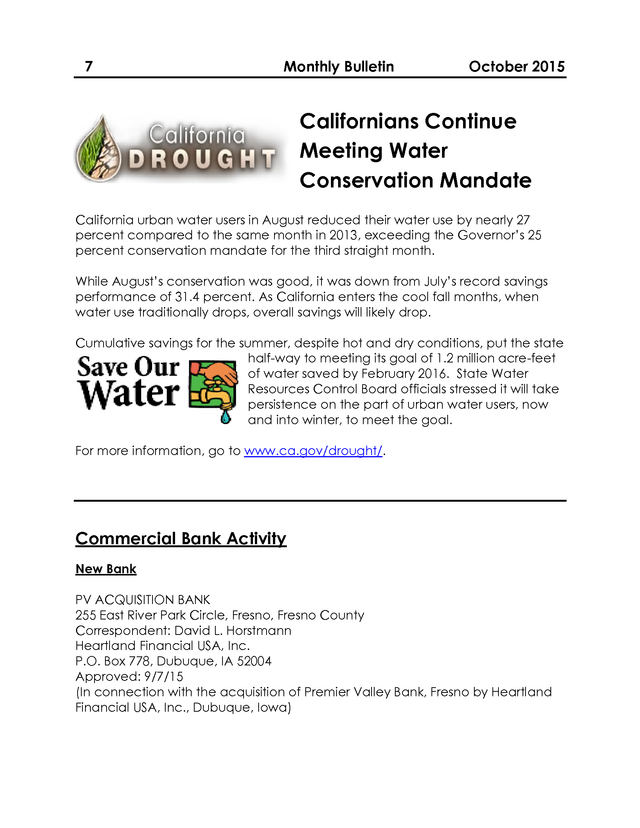 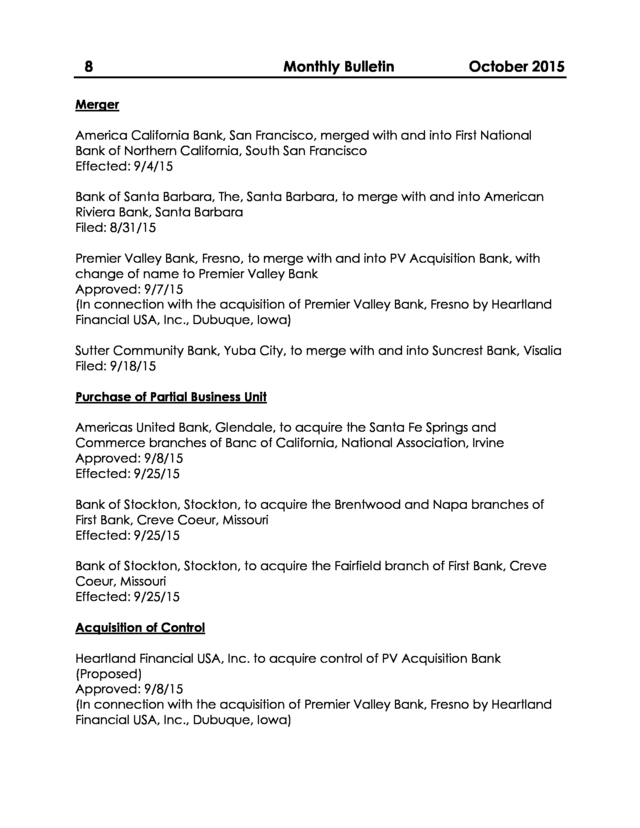 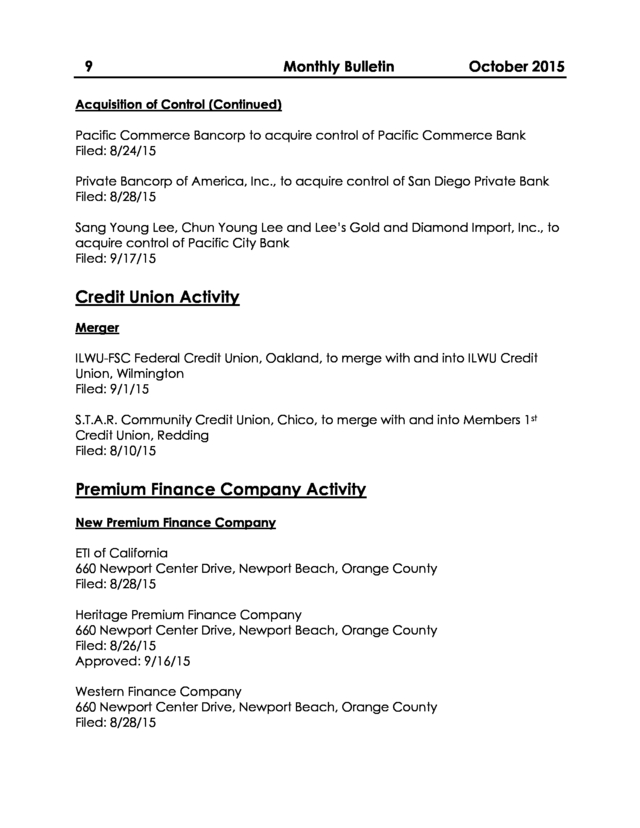 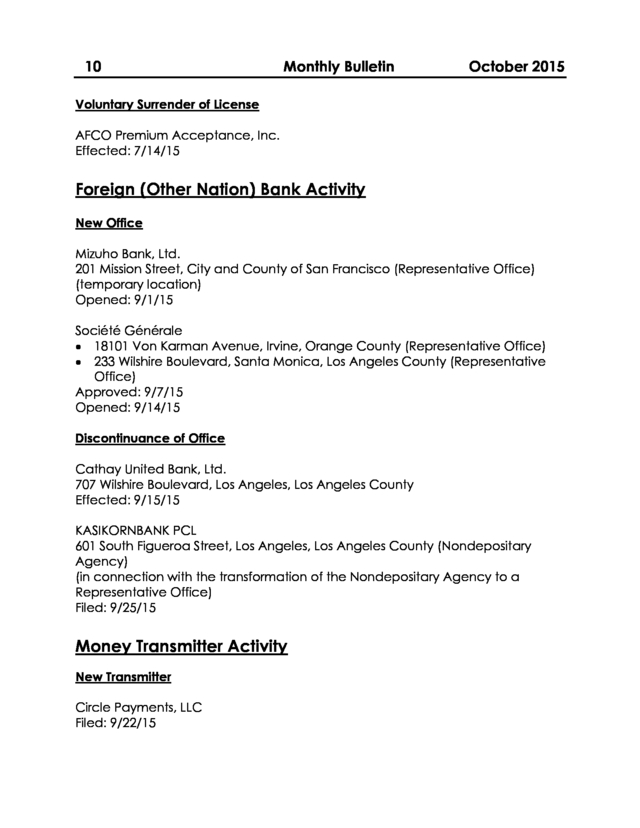 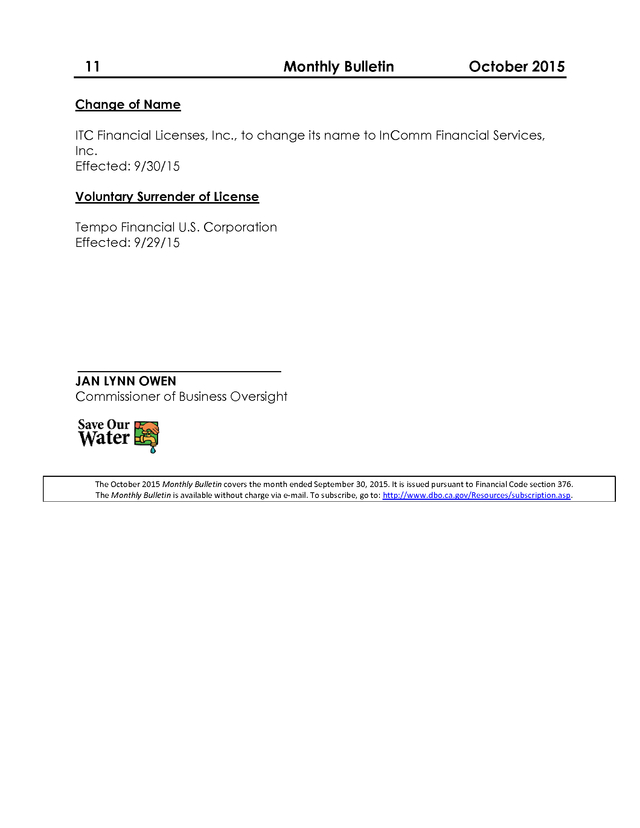 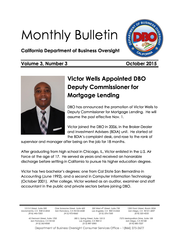 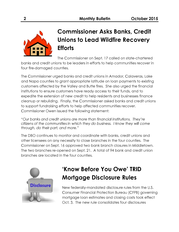 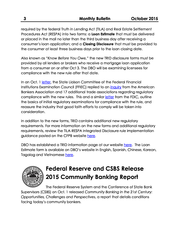 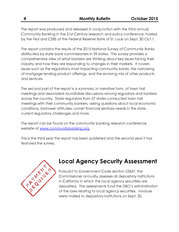 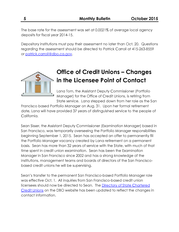 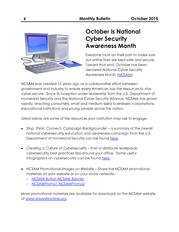 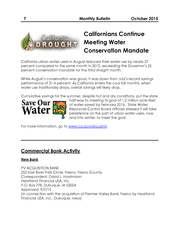 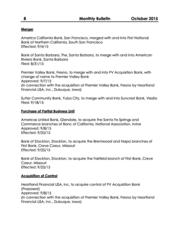 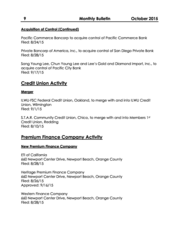 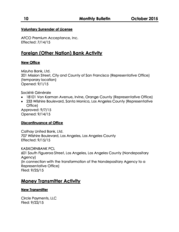 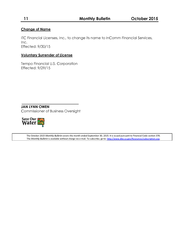 2) 2 Monthly Bulletin October 2015 Commissioner Asks Banks, Credit Unions to Lead Wildfire Recovery Efforts The Commissioner on Sept. 17 called on state-chartered banks and credit unions to be leaders in efforts to help communities recover in four fire-damaged counties. The Commissioner urged banks and credit unions in Amador, Calaveras, Lake and Napa counties to grant appropriate latitude on loan payments to existing customers affected by the Valley and Butte fires. She also urged the financial institutions to ensure customers have ready access to their funds, and to expedite the extension of new credit to help residents and businesses finance cleanup or rebuilding. Finally, the Commissioner asked banks and credit unions to support fundraising efforts to help affected communities recover. Commissioner Owen issued the following statement: &ldquo;Our banks and credit unions are more than financial institutions. They&rsquo;re citizens of the communities in which they do business. I know they will come through, do their part, and more.&rdquo; The DBO continues to monitor and coordinate with banks, credit unions and other licensees on any necessity to close branches in the four counties. The Commissioner on Sept. 16 approved two bank branch closures in Middletown. The two branches re-opened on Sept. 21. A total of 94 bank and credit union branches are located in the four counties. &lsquo;Know Before You Owe&rsquo; TRID Mortgage Disclosure Rules New federally-mandated disclosure rules from the U.S. Consumer Financial Protection Bureau (CFPB) governing mortgage loan estimates and closing costs took effect Oct. 3. The new rule consolidates four disclosures

3) 3 Monthly Bulletin October 2015 required by the federal Truth in Lending Act (TILA) and Real Estate Settlement Procedures Act (RESPA) into two forms: a Loan Estimate that must be delivered or placed in the mail no later than the third business day after receiving a consumer&rsquo;s loan application; and a Closing Disclosure that must be provided to the consumer at least three business days prior to the loan closing date. Also known as &ldquo;Know Before You Owe,&rdquo; the new TRID disclosure forms must be provided by all lenders or brokers who receive a mortgage loan application from a consumer on or after Oct 3. The DBO will be examining licensees for compliance with the new rule after that date. In an Oct. 1 letter, the State Liaison Committee of the Federal Financial Institutions Examination Council (FFIEC) replied to an inquiry from the American Bankers Association and 17 additional trade associations regarding regulatory compliance with the new rules. This and a similar letter from the FDIC, outline the basics of initial regulatory examinations for compliance with the rule, and reassure the industry that good faith efforts to comply will be taken into consideration. In addition to the new forms, TRID contains additional new regulatory requirements. For more information on the new forms and additional regulatory requirements, review the TILA-RESPA Integrated Disclosure rule implementation guidance posted on the CFPB website here. DBO has established a TRID information page at our website here. The Loan Estimate form is available on DBO&rsquo;s website in English, Spanish, Chinese, Korean, Tagalog and Vietnamese here. Federal Reserve and CSBS Release 2015 Community Banking Report The Federal Reserve System and the Conference of State Bank Supervisors (CSBS) on Oct. 1 released Community Banking in the 21st Century: Opportunities, Challenges and Perspectives, a report that details conditions facing today&rsquo;s community bankers.

4) 4 Monthly Bulletin October 2015 The report was produced and released in conjunction with the third annual Community Banking in the 21st Century research and policy conference, hosted by the Fed and CSBS at the Federal Reserve Bank of St. Louis on Sept. 30-Oct.1. The report contains the results of the 2015 National Survey of Community Banks, distributed by state bank commissioners in 39 states. The survey provides a comprehensive view of what bankers are thinking about key issues facing their industry and how they are responding to changes in their markets. It covers issues such as the regulations most impacting community banks, the narrowing of mortgage lending product offerings, and the evolving mix of other products and services. The second part of the report is a summary, in narrative form, of town hall meetings and associated roundtable discussions among regulators and bankers across the country. State regulators from 27 states conducted town hall meetings with their community bankers, asking questions about local economic conditions, borrower attitudes, unmet financial services needs in the state, current regulatory challenges and more. The report can be found on the community banking research conference website at www.communitybanking.org. This is the third year the report has been published and the second year it has featured the survey. Local Agency Security Assessment Pursuant to Government Code section 53667, the Commissioner annually assesses all depository institutions in California in which the local agency securities are deposited. The assessments fund the DBO&rsquo;s administration of the laws relating to local agency securities. Invoices were mailed to depository institutions on Sept. 30.

5) 5 Monthly Bulletin October 2015 The base rate for the assessment was set at 0.0021% of average local agency deposits for fiscal year 2014-15. Depository institutions must pay their assessment no later than Oct. 20. Questions regarding the assessment should be directed to Patrick Carroll at 415-263-8559 or patrick.carroll@dbo.ca.gov. Office of Credit Unions &ndash; Changes in the Licensee Point of Contact Lana Tom, the Assistant Deputy Commissioner (Portfolio Manager) for the Office of Credit Unions, is retiring from State service. Lana stepped down from her role as the San Francisco based Portfolio Manager on Aug. 31. Upon her formal retirement date, Lana will have provided 37 years of distinguished service to the people of California. Sean Sisser, the Assistant Deputy Commissioner (Examination Manager) based in San Francisco, was temporarily overseeing the Portfolio Manager responsibilities beginning September 1, 2015. Sean has accepted an offer to permanently fill the Portfolio Manager vacancy created by Lana retirement on a permanent basis. Sean has more than 32 years of service with the State, with much of that time spent in credit union examination. Sean has been the Examination Manager in San Francisco since 2002 and has a strong knowledge of the institutions, management teams and boards of directors of the San Franciscobased credit unions he will be supervising. Sean&rsquo;s transfer to the permanent San Francisco-based Portfolio Manager role was effective Oct. 1. All inquiries from San Francisco-based credit union licensees should now be directed to Sean. The Directory of State Chartered Credit Unions on the DBO website has been updated to reflect the changes in contact information.

6) 6 Monthly Bulletin October 2015 October is National Cyber Security Awareness Month Everyone must do their part to make sure our online lives are kept safe and secure. Toward that end, October has been declared National Cyber Security Awareness Month (NCSAM). NCSAM was created 15 years ago as a collaborative effort between government and industry to ensure every American has the resources to stay cyber-secure. Since its inception under leadership from the U.S. Department of Homeland Security and the National Cyber Security Alliance, NCSAM has grown rapidly, reaching consumers, small and medium-sized businesses, corporations, educational institutions and young people across the nation. Listed below are some of the resources your institution may use to engage. ï‚· Stop. Think. Connect. Campaign Backgrounder &ndash; a summary of the overall national cybersecurity education and awareness campaign from the U.S. Department of Homeland Security can be found here. ï‚· Creating a Culture of Cybersecurity &ndash; Post or distribute workplace cybersecurity best practices tips around your office. Some useful infographics on cybersecurity can be found here. ï‚· NCSAM Promotional Images on Website &ndash; Share the NCSAM promotional materials on your website or on your social networks. o NCSAM Button NCSAM Banner o NCSAMPromo1 NCSAMPromo2 More promotional materials are available for download on the NCSAM website at www.staysafeonline.org.