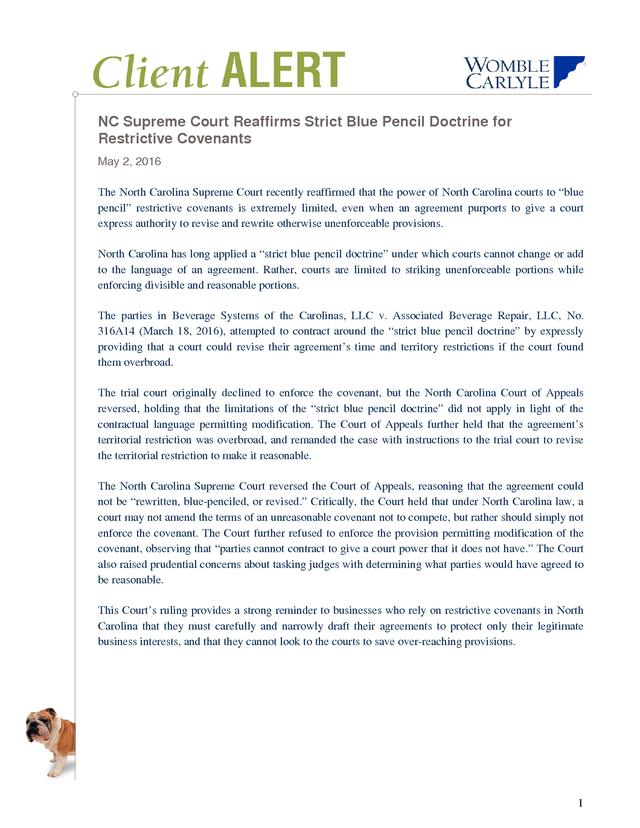 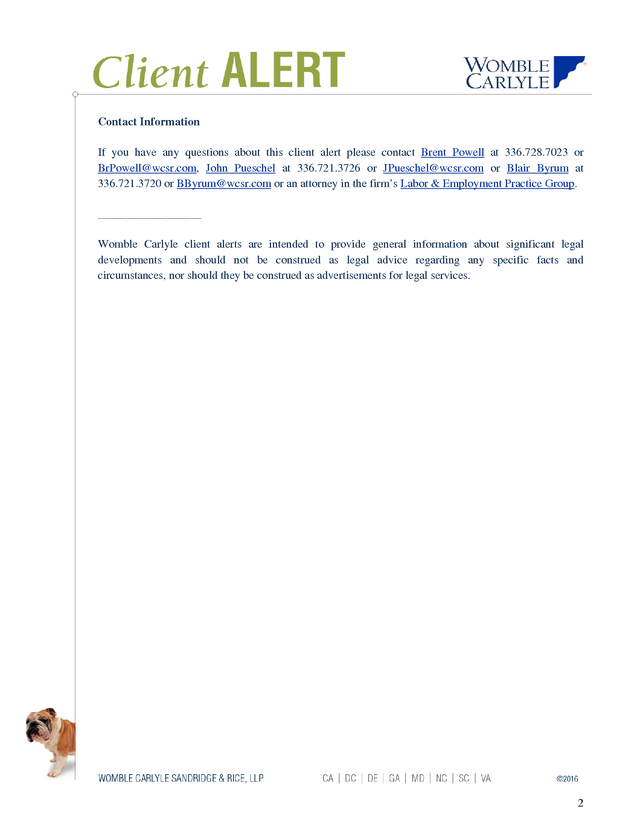 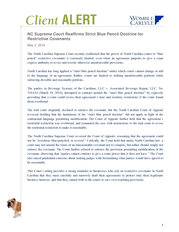 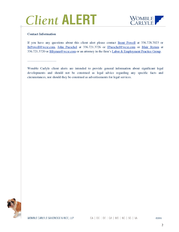 1) NC Supreme Court Reaffirms Strict Blue Pencil Doctrine for Restrictive Covenants May 2, 2016 The North Carolina Supreme Court recently reaffirmed that the power of North Carolina courts to &ldquo;blue pencil&rdquo; restrictive covenants is extremely limited, even when an agreement purports to give a court express authority to revise and rewrite otherwise unenforceable provisions. North Carolina has long applied a &ldquo;strict blue pencil doctrine&rdquo; under which courts cannot change or add to the language of an agreement. Rather, courts are limited to striking unenforceable portions while enforcing divisible and reasonable portions. The parties in Beverage Systems of the Carolinas, LLC v. Associated Beverage Repair, LLC, No. 316A14 (March 18, 2016), attempted to contract around the &ldquo;strict blue pencil doctrine&rdquo; by expressly providing that a court could revise their agreement&rsquo;s time and territory restrictions if the court found them overbroad. The trial court originally declined to enforce the covenant, but the North Carolina Court of Appeals reversed, holding that the limitations of the &ldquo;strict blue pencil doctrine&rdquo; did not apply in light of the contractual language permitting modification. The Court of Appeals further held that the agreement&rsquo;s territorial restriction was overbroad, and remanded the case with instructions to the trial court to revise the territorial restriction to make it reasonable. The North Carolina Supreme Court reversed the Court of Appeals, reasoning that the agreement could not be &ldquo;rewritten, blue-penciled, or revised.&rdquo; Critically, the Court held that under North Carolina law, a court may not amend the terms of an unreasonable covenant not to compete, but rather should simply not enforce the covenant. The Court further refused to enforce the provision permitting modification of the covenant, observing that &ldquo;parties cannot contract to give a court power that it does not have.&rdquo; The Court also raised prudential concerns about tasking judges with determining what parties would have agreed to be reasonable. This Court&rsquo;s ruling provides a strong reminder to businesses who rely on restrictive covenants in North Carolina that they must carefully and narrowly draft their agreements to protect only their legitimate business interests, and that they cannot look to the courts to save over-reaching provisions. 1

2) Contact Information If you have any questions about this client alert please contact Brent Powell at 336.728.7023 or BrPowell@wcsr.com, John Pueschel at 336.721.3726 or JPueschel@wcsr.com or Blair Byrum at 336.721.3720 or BByrum@wcsr.com or an attorney in the firm&rsquo;s Labor &amp; Employment Practice Group. __________________ Womble Carlyle client alerts are intended to provide general information about significant legal developments and should not be construed as legal advice regarding any specific facts and circumstances, nor should they be construed as advertisements for legal services. 2