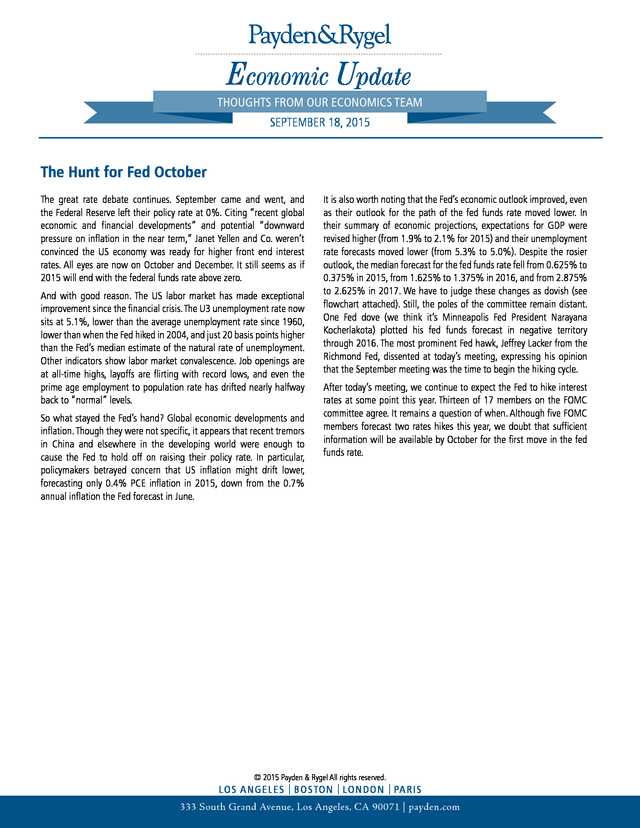 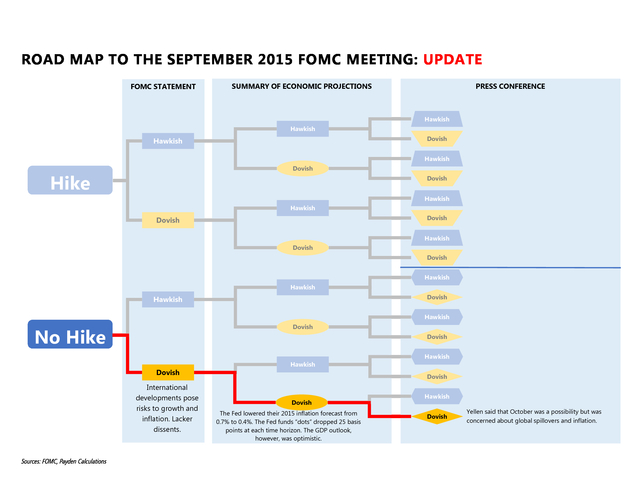 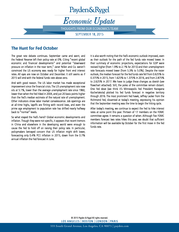 1) Economic Update THOUGHTS FROM OUR ECONOMICS TEAM SEPTEMBER 18, 2015 The Hunt for Fed October The great rate debate continues. September came and went, and the Federal Reserve left their policy rate at 0%. Citing &ldquo;recent global economic and financial developments&rdquo; and potential &ldquo;downward pressure on inflation in the near term,&rdquo; Janet Yellen and Co. weren&rsquo;t convinced the US economy was ready for higher front end interest rates. All eyes are now on October and December. It still seems as if 2015 will end with the federal funds rate above zero. And with good reason. The US labor market has made exceptional improvement since the financial crisis. The U3 unemployment rate now sits at 5.1%, lower than the average unemployment rate since 1960, lower than when the Fed hiked in 2004, and just 20 basis points higher than the Fed&rsquo;s median estimate of the natural rate of unemployment. Other indicators show labor market convalescence. Job openings are at all-time highs, layoffs are flirting with record lows, and even the prime age employment to population rate has drifted nearly halfway back to &ldquo;normal&rdquo; levels. So what stayed the Fed&rsquo;s hand? Global economic developments and inflation. Though they were not specific, it appears that recent tremors in China and elsewhere in the developing world were enough to cause the Fed to hold off on raising their policy rate. In particular, policymakers betrayed concern that US inflation might drift lower, forecasting only 0.4% PCE inflation in 2015, down from the 0.7% annual inflation the Fed forecast in June. It is also worth noting that the Fed&rsquo;s economic outlook improved, even as their outlook for the path of the fed funds rate moved lower. In their summary of economic projections, expectations for GDP were revised higher (from 1.9% to 2.1% for 2015) and their unemployment rate forecasts moved lower (from 5.3% to 5.0%). Despite the rosier outlook, the median forecast for the fed funds rate fell from 0.625% to 0.375% in 2015, from 1.625% to 1.375% in 2016, and from 2.875% to 2.625% in 2017. We have to judge these changes as dovish (see flowchart attached). Still, the poles of the committee remain distant. One Fed dove (we think it&rsquo;s Minneapolis Fed President Narayana Kocherlakota) plotted his fed funds forecast in negative territory through 2016. The most prominent Fed hawk, Jeffrey Lacker from the Richmond Fed, dissented at today&rsquo;s meeting, expressing his opinion that the September meeting was the time to begin the hiking cycle. After today&rsquo;s meeting, we continue to expect the Fed to hike interest rates at some point this year. Thirteen of 17 members on the FOMC committee agree. It remains a question of when. Although five FOMC members forecast two rates hikes this year, we doubt that sufficient information will be available by October for the first move in the fed funds rate. &copy; 2015 Payden &amp; Rygel All rights reserved. LOS ANGELES | BOSTON | LONDON | PARIS 333 South Grand Avenue, Los Angeles, CA 90071 | payden.com