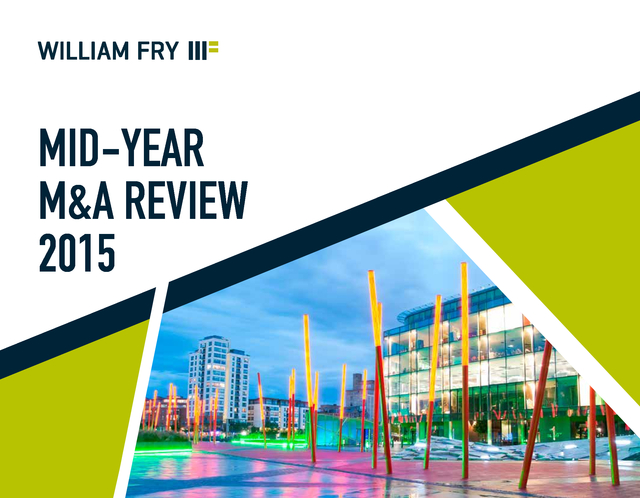 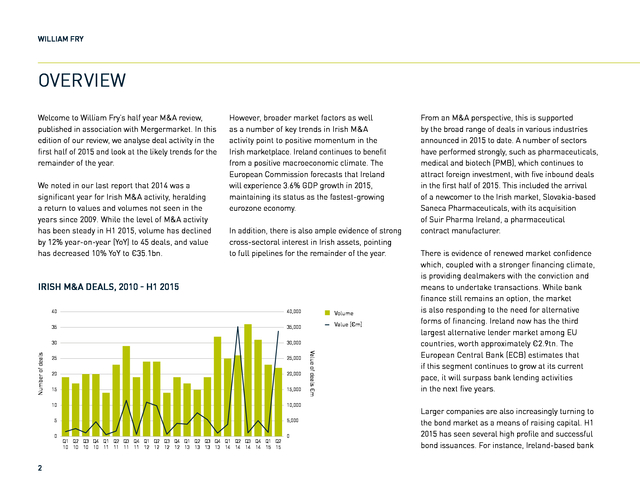 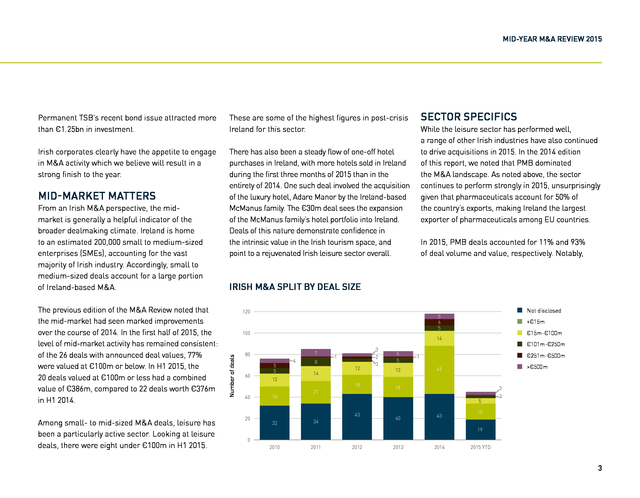 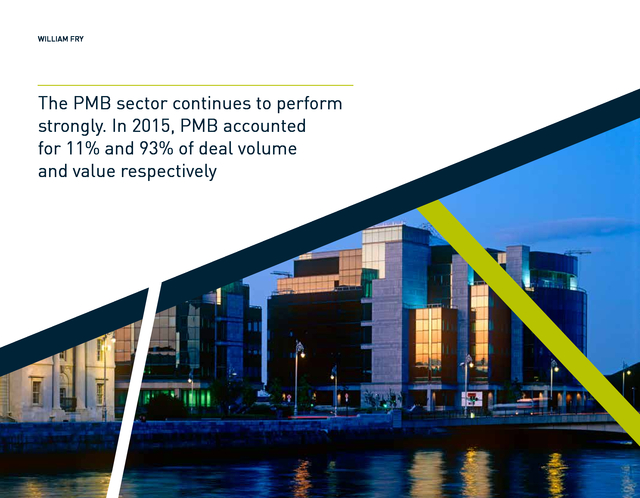 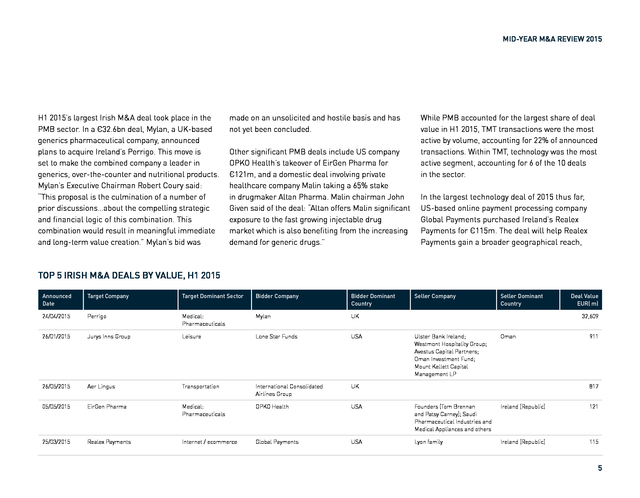 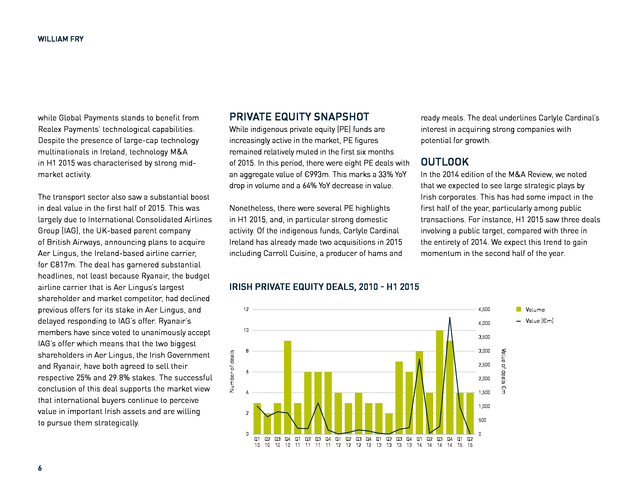 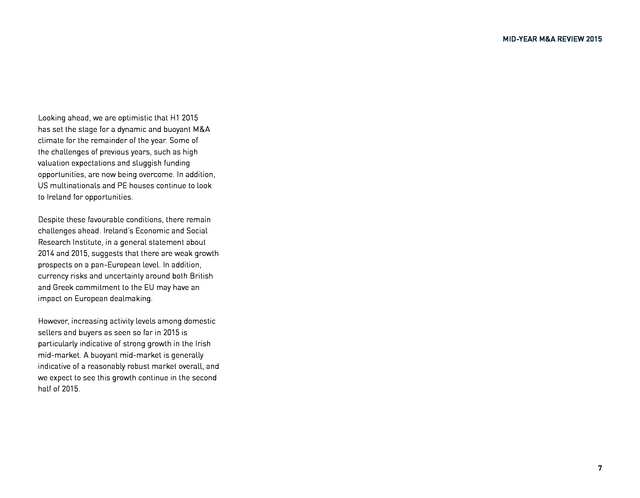 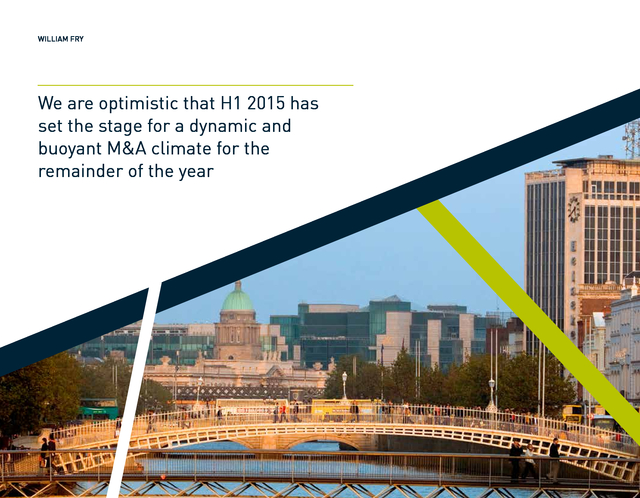 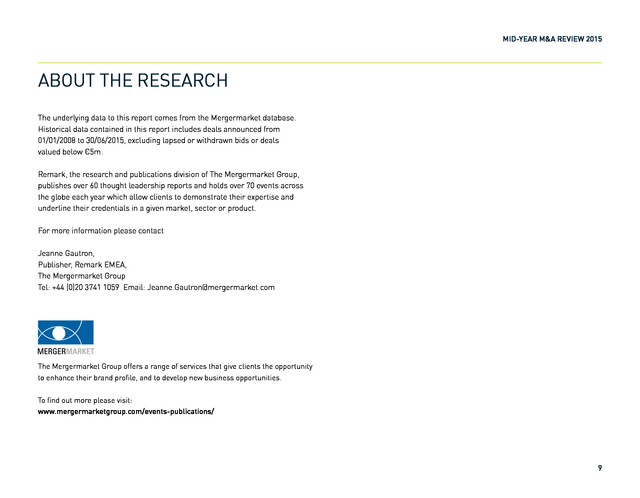 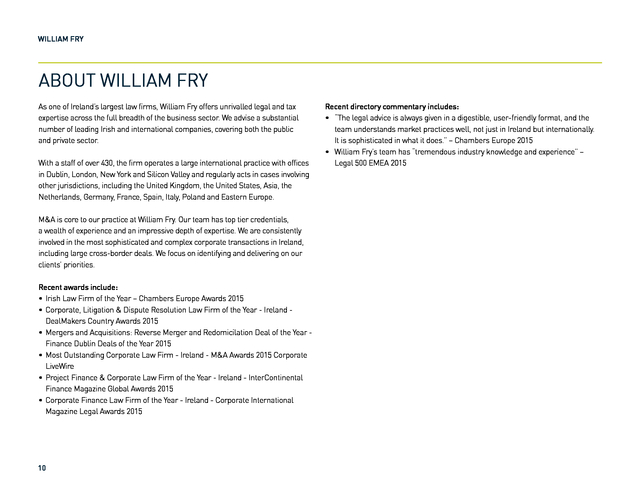 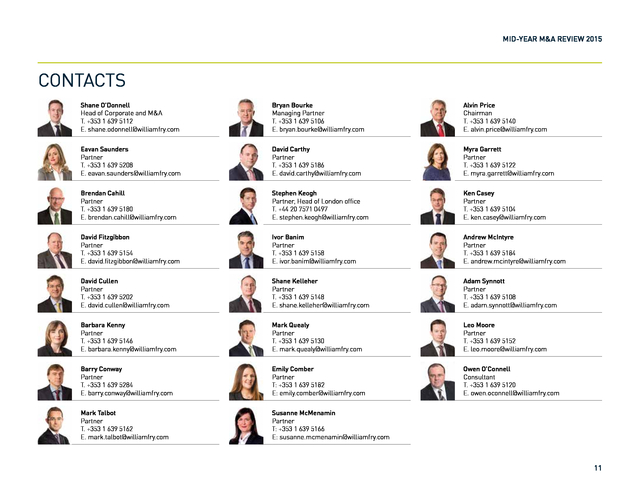 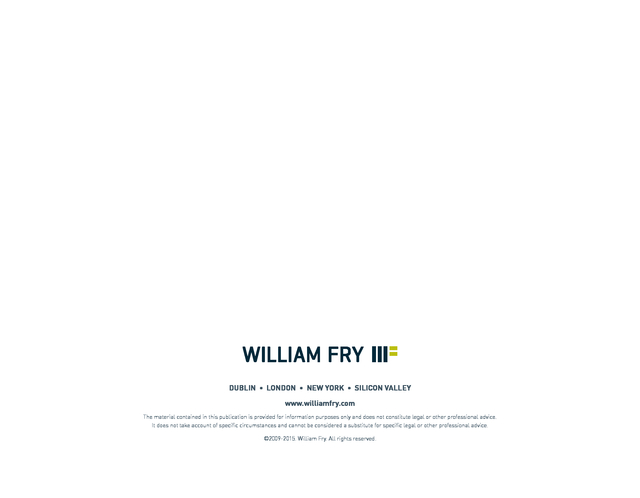 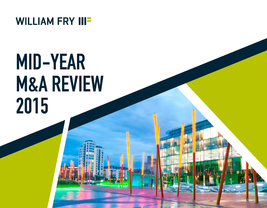 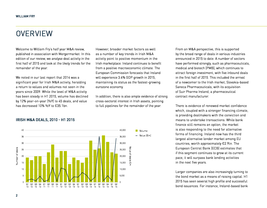 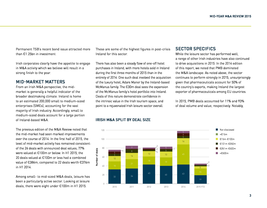 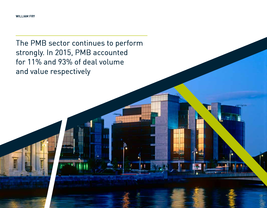 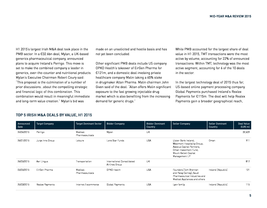 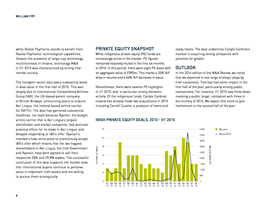 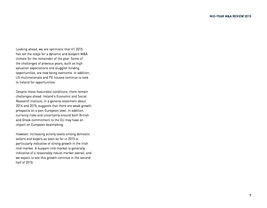 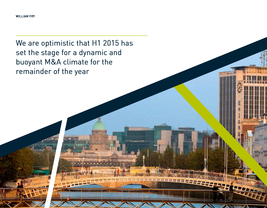 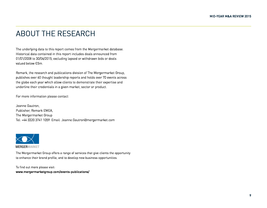 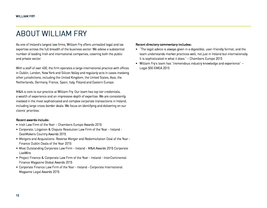 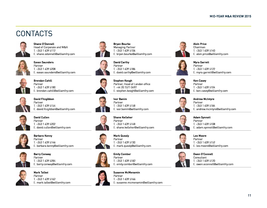 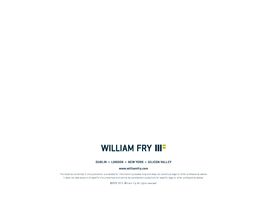 2) WILLIAM FRY OVERVIEW Welcome to William Fry&rsquo;s half year M&amp;A review, published in association with Mergermarket. In this edition of our review, we analyse deal activity in the first half of 2015 and look at the likely trends for the remainder of the year. We noted in our last report that 2014 was a significant year for Irish M&amp;A activity, heralding a return to values and volumes not seen in the years since 2009. While the level of M&amp;A activity has been steady in H1 2015, volume has declined by 12% year-on-year (YoY) to 45 deals, and value has decreased 10% YoY to &euro;35.1bn. However, broader market factors as well as a number of key trends in Irish M&amp;A activity point to positive momentum in the Irish marketplace. Ireland continues to benefit from a positive macroeconomic climate. The European Commission forecasts that Ireland will experience 3.6% GDP growth in 2015, maintaining its status as the fastest-growing eurozone economy. In addition, there is also ample evidence of strong cross-sectoral interest in Irish assets, pointing to full pipelines for the remainder of the year. IRISH M&amp;A DEALS, 2010 - H1 2015 Volume 35,000 Value (&euro;m) 30 30,000 25 25,000 20 20,000 15 15,000 10 10,000 5 5,000 0 2 Q1 Q2 Q3 Q4 Q1 Q2 Q3 Q4 Q1 Q2 Q3 Q4 Q1 Q2 Q3 Q4 Q1 Q2 Q3 Q4 Q1 Q2 10 10 10 10 11 11 11 11 12 12 12 12 13 13 13 13 14 14 14 14 15 15 0 Value of deals &euro;m 40,000 35 Number of deals 40 From an M&amp;A perspective, this is supported by the broad range of deals in various industries announced in 2015 to date. A number of sectors have performed strongly, such as pharmaceuticals, medical and biotech (PMB), which continues to attract foreign investment, with five inbound deals in the first half of 2015. This included the arrival of a newcomer to the Irish market, Slovakia-based Saneca Pharmaceuticals, with its acquisition of Suir Pharma Ireland, a pharmaceutical contract manufacturer. There is evidence of renewed market confidence which, coupled with a stronger financing climate, is providing dealmakers with the conviction and means to undertake transactions. While bank finance still remains an option, the market is also responding to the need for alternative forms of financing. Ireland now has the third largest alternative lender market among EU countries, worth approximately &euro;2.9tn. The European Central Bank (ECB) estimates that if this segment continues to grow at its current pace, it will surpass bank lending activities in the next five years. Larger companies are also increasingly turning to the bond market as a means of raising capital. H1 2015 has seen several high profile and successful bond issuances. For instance, Ireland-based bank

3) MID-YEAR M&amp;A REVIEW 2015 Permanent TSB&rsquo;s recent bond issue attracted more than &euro;1.25bn in investment. Irish corporates clearly have the appetite to engage in M&amp;A activity which we believe will result in a strong finish to the year. SECTOR SPECIFICS These are some of the highest figures in post-crisis Ireland for this sector. There has also been a steady flow of one-off hotel purchases in Ireland, with more hotels sold in Ireland during the first three months of 2015 than in the entirety of 2014. One such deal involved the acquisition of the luxury hotel, Adare Manor by the Ireland-based McManus family. The &euro;30m deal sees the expansion of the McManus family&rsquo;s hotel portfolio into Ireland. Deals of this nature demonstrate confidence in the intrinsic value in the Irish tourism space, and point to a rejuvenated Irish leisure sector overall. From an Irish M&amp;A perspective, the midmarket is generally a helpful indicator of the broader dealmaking climate. Ireland is home to an estimated 200,000 small to medium-sized enterprises (SMEs), accounting for the vast majority of Irish industry. Accordingly, small to medium-sized deals account for a large portion of Ireland-based M&amp;A. The previous edition of the M&amp;A Review noted that the mid-market had seen marked improvements over the course of 2014. In the first half of 2015, the level of mid-market activity has remained consistent: of the 26 deals with announced deal values, 77% were valued at &euro;100m or below. In H1 2015, the 20 deals valued at &euro;100m or less had a combined value of &euro;386m, compared to 22 deals worth &euro;376m in H1 2014. Among small- to mid-sized M&amp;A deals, leisure has been a particularly active sector. Looking at leisure deals, there were eight under &euro;100m in H1 2015. In 2015, PMB deals accounted for 11% and 93% of deal volume and value, respectively. Notably, IRISH M&amp;A SPLIT BY DEAL SIZE 120 40 20 &lt;&euro;15m &euro;15m-&euro;100m 14 7 80 60 Not disclosed 5 6 5 100 Number of deals MID-MARKET MATTERS While the leisure sector has performed well, a range of other Irish industries have also continued to drive acquisitions in 2015. In the 2014 edition of this report, we noted that PMB dominated the M&amp;A landscape. As noted above, the sector continues to perform strongly in 2015, unsurprisingly given that pharmaceuticals account for 50% of the country&rsquo;s exports, making Ireland the largest exporter of pharmaceuticals among EU countries. 5 5 12 18 4 8 14 1 12 18 21 5 5 13 &euro;101m-&euro;250m &euro;251m-&euro;500m 1 &gt;&euro;500m 45 19 3 5 43 32 3 2 3 34 40 43 3 15 19 0 2010 2011 2012 2013 2014 2015 YTD 3

4) WILLIAM FRY The PMB sector continues to perform strongly. In 2015, PMB accounted for 11% and 93% of deal volume and value respectively 4

6) WILLIAM FRY While indigenous private equity (PE) funds are increasingly active in the market, PE figures remained relatively muted in the first six months of 2015. In this period, there were eight PE deals with an aggregate value of &euro;993m. This marks a 33% YoY drop in volume and a 64% YoY decrease in value. Nonetheless, there were several PE highlights in H1 2015, and, in particular strong domestic activity. Of the indigenous funds, Carlyle Cardinal Ireland has already made two acquisitions in 2015 including Carroll Cuisine, a producer of hams and OUTLOOK In the 2014 edition of the M&amp;A Review, we noted that we expected to see large strategic plays by Irish corporates. This has had some impact in the first half of the year, particularly among public transactions. For instance, H1 2015 saw three deals involving a public target, compared with three in the entirety of 2014. We expect this trend to gain momentum in the second half of the year. IRISH PRIVATE EQUITY DEALS, 2010 - H1 2015 4,500 Volume 4,000 12 Value (&euro;m) 10 3,500 8 3,000 2,500 6 2,000 4 1,500 1,000 2 500 0 6 ready meals. The deal underlines Carlyle Cardinal&rsquo;s interest in acquiring strong companies with potential for growth. Q1 Q2 Q3 Q4 Q1 Q2 Q3 Q4 Q1 Q2 Q3 Q4 Q1 Q2 Q3 Q4 Q1 Q2 Q3 Q4 Q1 Q2 10 10 10 10 11 11 11 11 12 12 12 12 13 13 13 13 14 14 14 14 15 15 0 Value of deals &euro;m The transport sector also saw a substantial boost in deal value in the first half of 2015. This was largely due to International Consolidated Airlines Group (IAG), the UK-based parent company of British Airways, announcing plans to acquire Aer Lingus, the Ireland-based airline carrier, for &euro;817m. The deal has garnered substantial headlines, not least because Ryanair, the budget airline carrier that is Aer Lingus&rsquo;s largest shareholder and market competitor, had declined previous offers for its stake in Aer Lingus, and delayed responding to IAG&rsquo;s offer. Ryanair&rsquo;s members have since voted to unanimously accept IAG&rsquo;s offer which means that the two biggest shareholders in Aer Lingus, the Irish Government and Ryanair, have both agreed to sell their respective 25% and 29.8% stakes. The successful conclusion of this deal supports the market view that international buyers continue to perceive value in important Irish assets and are willing to pursue them strategically. PRIVATE EQUITY SNAPSHOT Number of deals while Global Payments stands to benefit from Realex Payments&rsquo; technological capabilities. Despite the presence of large-cap technology multinationals in Ireland, technology M&amp;A in H1 2015 was characterised by strong midmarket activity.

7) MID-YEAR M&amp;A REVIEW 2015 Looking ahead, we are optimistic that H1 2015 has set the stage for a dynamic and buoyant M&amp;A climate for the remainder of the year. Some of the challenges of previous years, such as high valuation expectations and sluggish funding opportunities, are now being overcome. In addition, US multinationals and PE houses continue to look to Ireland for opportunities. Despite these favourable conditions, there remain challenges ahead. Ireland&rsquo;s Economic and Social Research Institute, in a general statement about 2014 and 2015, suggests that there are weak growth prospects on a pan-European level. In addition, currency risks and uncertainty around both British and Greek commitment to the EU may have an impact on European dealmaking. However, increasing activity levels among domestic sellers and buyers as seen so far in 2015 is particularly indicative of strong growth in the Irish mid-market. A buoyant mid-market is generally indicative of a reasonably robust market overall, and we expect to see this growth continue in the second half of 2015. 7

8) WILLIAM FRY We are optimistic that H1 2015 has set the stage for a dynamic and buoyant M&amp;A climate for the remainder of the year 8

9) MID-YEAR M&amp;A REVIEW 2015 ABOUT THE RESEARCH The underlying data to this report comes from the Mergermarket database. Historical data contained in this report includes deals announced from 01/01/2008 to 30/06/2015, excluding lapsed or withdrawn bids or deals valued below &euro;5m. Remark, the research and publications division of The Mergermarket Group, publishes over 60 thought leadership reports and holds over 70 events across the globe each year which allow clients to demonstrate their expertise and underline their credentials in a given market, sector or product. For more information please contact Jeanne Gautron, Publisher, Remark EMEA, The Mergermarket Group Tel: +44 (0)20 3741 1059 Email: Jeanne.Gautron@mergermarket.com The Mergermarket Group offers a range of services that give clients the opportunity to enhance their brand profile, and to develop new business opportunities. To find out more please visit: www.mergermarketgroup.com/events-publications/ 9

10) WILLIAM FRY ABOUT WILLIAM FRY As one of Ireland&rsquo;s largest law firms, William Fry offers unrivalled legal and tax expertise across the full breadth of the business sector. We advise a substantial number of leading Irish and international companies, covering both the public and private sector. With a staff of over 430, the firm operates a large international practice with offices in Dublin, London, New York and Silicon Valley and regularly acts in cases involving other jurisdictions, including the United Kingdom, the United States, Asia, the Netherlands, Germany, France, Spain, Italy, Poland and Eastern Europe. M&amp;A is core to our practice at William Fry. Our team has top tier credentials, a wealth of experience and an impressive depth of expertise. We are consistently involved in the most sophisticated and complex corporate transactions in Ireland, including large cross-border deals. We focus on identifying and delivering on our clients&rsquo; priorities. Recent awards include: &bull; Irish Law Firm of the Year &ndash; Chambers Europe Awards 2015 &bull; Corporate, Litigation &amp; Dispute Resolution Law Firm of the Year - Ireland DealMakers Country Awards 2015 &bull; Mergers and Acquisitions: Reverse Merger and Redomicilation Deal of the Year Finance Dublin Deals of the Year 2015 &bull; Most Outstanding Corporate Law Firm - Ireland - M&amp;A Awards 2015 Corporate LiveWire &bull; Project Finance &amp; Corporate Law Firm of the Year - Ireland - InterContinental Finance Magazine Global Awards 2015 &bull; Corporate Finance Law Firm of the Year - Ireland - Corporate International Magazine Legal Awards 2015 10 Recent directory commentary includes: &bull; &ldquo;The legal advice is always given in a digestible, user-friendly format, and the team understands market practices well, not just in Ireland but internationally. It is sophisticated in what it does.&rdquo; &ndash; Chambers Europe 2015 &bull; William Fry&rsquo;s team has &ldquo;tremendous industry knowledge and experience&rdquo; &ndash; Legal 500 EMEA 2015

12) DUBLIN &bull; LONDON &bull; NEW YORK &bull; SILICON VALLEY www.williamfry.com The material contained in this publication is provided for information purposes only and does not constitute legal or other professional advice. It does not take account of specific circumstances and cannot be considered a substitute for specific legal or other professional advice. &copy;2009-2015. William Fry. All rights reserved.