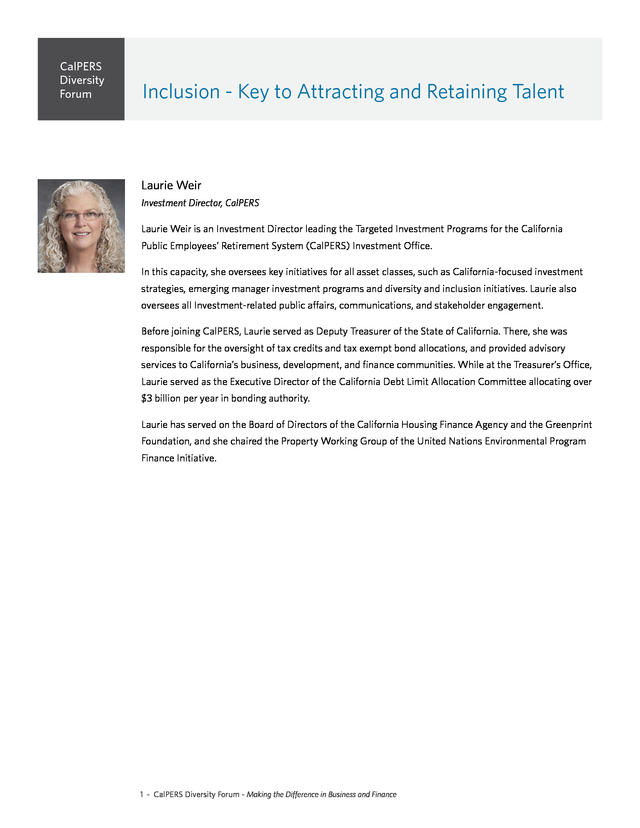 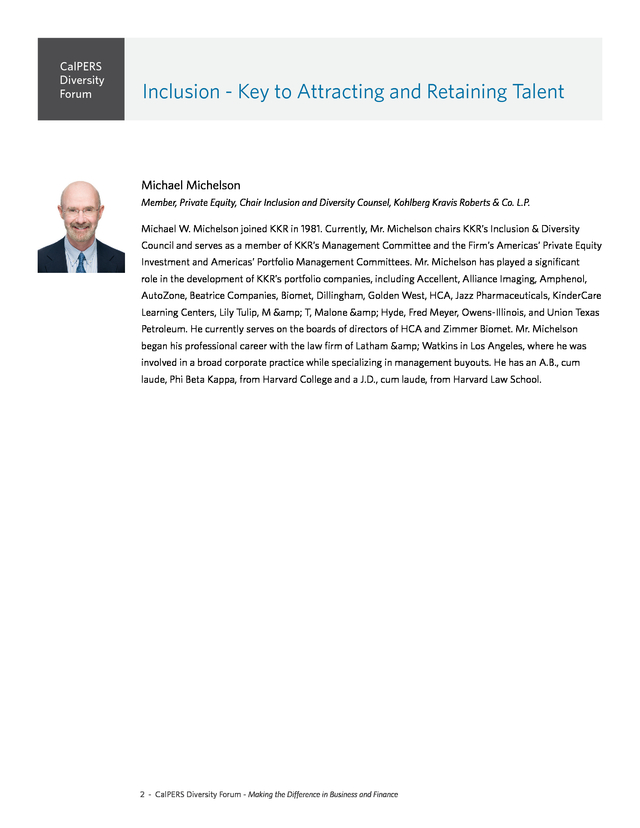 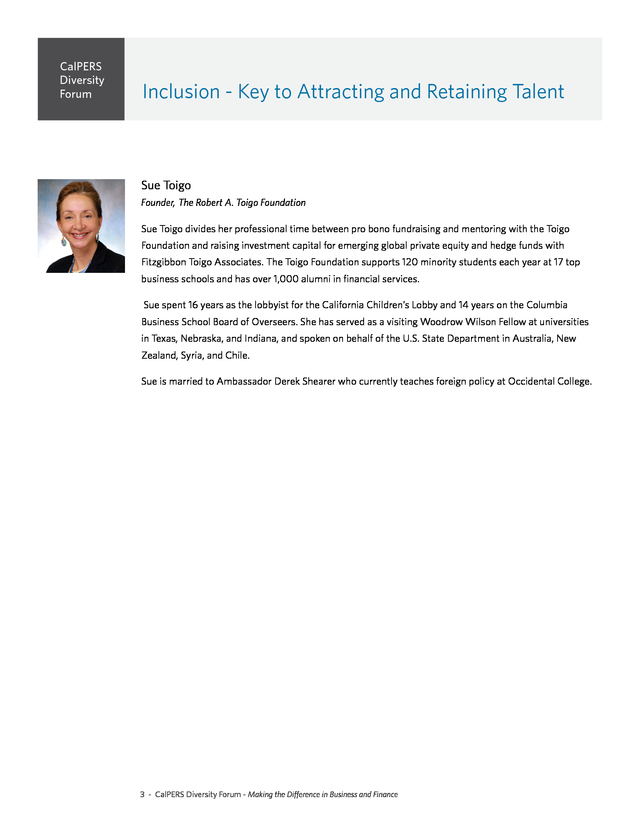 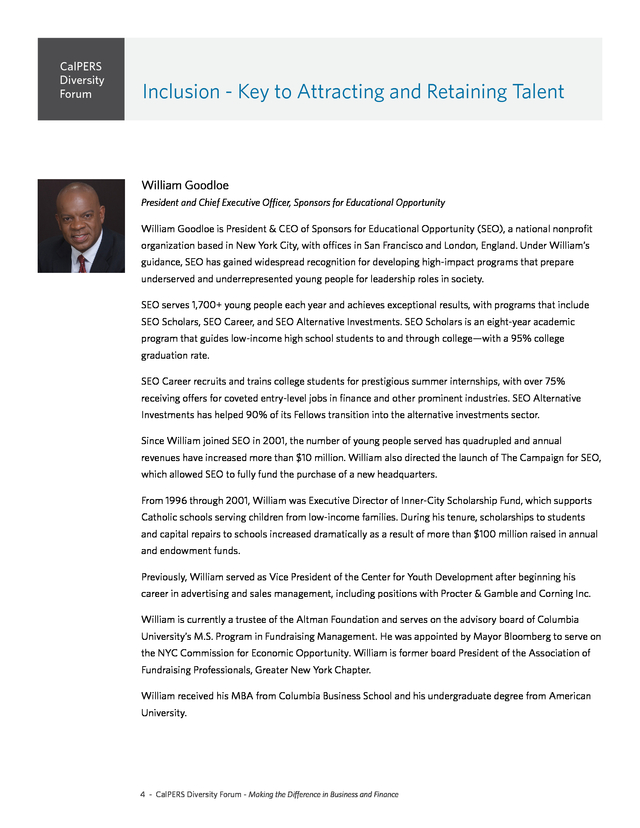 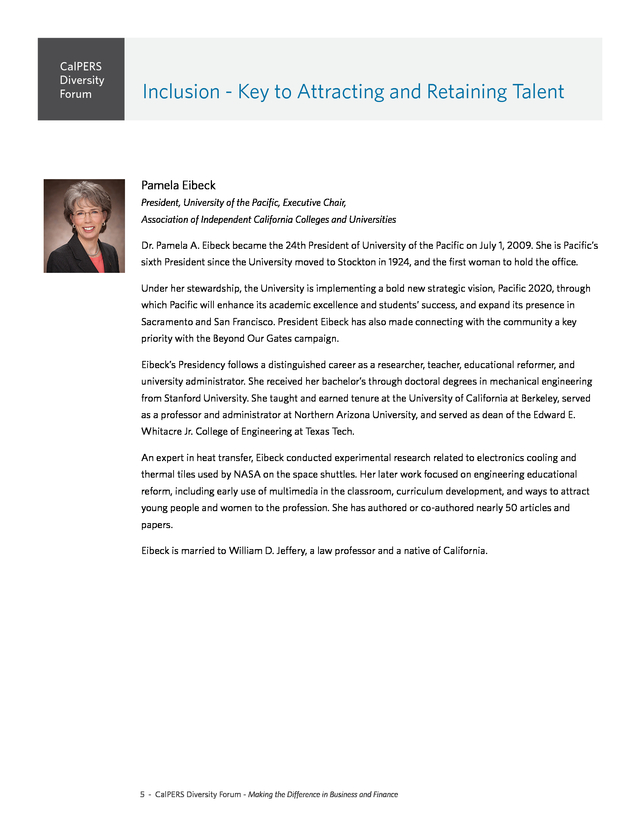 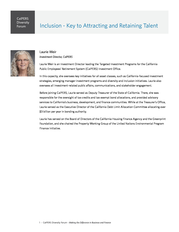 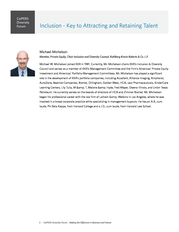 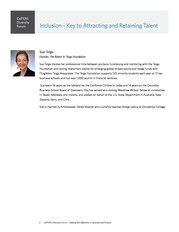 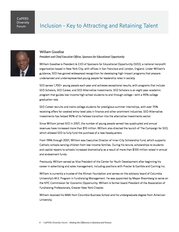 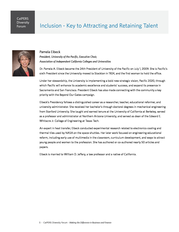 1
1 of 5
Inclusion: Key to Attracting and Retaining Talent

1) CalPERS Diversity Forum Inclusion - Key to Attracting and Retaining Talent Laurie Weir Investment Director, CalPERS Laurie Weir is an Investment Director leading the Targeted Investment Programs for the California Public Employees&rsquo; Retirement System (CalPERS) Investment Office. In this capacity, she oversees key initiatives for all asset classes, such as California-focused investment strategies, emerging manager investment programs and diversity and inclusion initiatives. Laurie also oversees all Investment-related public affairs, communications, and stakeholder engagement. Before joining CalPERS, Laurie served as Deputy Treasurer of the State of California. There, she was responsible for the oversight of tax credits and tax exempt bond allocations, and provided advisory services to California&rsquo;s business, development, and finance communities. While at the Treasurer&rsquo;s Office, Laurie served as the Executive Director of the California Debt Limit Allocation Committee allocating over $3 billion per year in bonding authority. Laurie has served on the Board of Directors of the California Housing Finance Agency and the Greenprint Foundation, and she chaired the Property Working Group of the United Nations Environmental Program Finance Initiative. 1 - CalPERS Diversity Forum - Making the Difference in Business and Finance

3) CalPERS Diversity Forum Inclusion - Key to Attracting and Retaining Talent Sue Toigo Founder, The Robert A. Toigo Foundation Sue Toigo divides her professional time between pro bono fundraising and mentoring with the Toigo Foundation and raising investment capital for emerging global private equity and hedge funds with Fitzgibbon Toigo Associates. The Toigo Foundation supports 120 minority students each year at 17 top business schools and has over 1,000 alumni in financial services. Sue spent 16 years as the lobbyist for the California Children&rsquo;s Lobby and 14 years on the Columbia Business School Board of Overseers. She has served as a visiting Woodrow Wilson Fellow at universities in Texas, Nebraska, and Indiana, and spoken on behalf of the U.S. State Department in Australia, New Zealand, Syria, and Chile. Sue is married to Ambassador Derek Shearer who currently teaches foreign policy at Occidental College. 3 - CalPERS Diversity Forum - Making the Difference in Business and Finance

4) CalPERS Diversity Forum Inclusion - Key to Attracting and Retaining Talent William Goodloe President and Chief Executive Officer, Sponsors for Educational Opportunity William Goodloe is President &amp; CEO of Sponsors for Educational Opportunity (SEO), a national nonprofit organization based in New York City, with offices in San Francisco and London, England. Under William&rsquo;s guidance, SEO has gained widespread recognition for developing high-impact programs that prepare underserved and underrepresented young people for leadership roles in society. SEO serves 1,700+ young people each year and achieves exceptional results, with programs that include SEO Scholars, SEO Career, and SEO Alternative Investments. SEO Scholars is an eight-year academic program that guides low-income high school students to and through college&mdash;with a 95% college graduation rate. SEO Career recruits and trains college students for prestigious summer internships, with over 75% receiving offers for coveted entry-level jobs in finance and other prominent industries. SEO Alternative Investments has helped 90% of its Fellows transition into the alternative investments sector. Since William joined SEO in 2001, the number of young people served has quadrupled and annual revenues have increased more than $10 million. William also directed the launch of The Campaign for SEO, which allowed SEO to fully fund the purchase of a new headquarters. From 1996 through 2001, William was Executive Director of Inner-City Scholarship Fund, which supports Catholic schools serving children from low-income families. During his tenure, scholarships to students and capital repairs to schools increased dramatically as a result of more than $100 million raised in annual and endowment funds. Previously, William served as Vice President of the Center for Youth Development after beginning his career in advertising and sales management, including positions with Procter &amp; Gamble and Corning Inc. William is currently a trustee of the Altman Foundation and serves on the advisory board of Columbia University&rsquo;s M.S. Program in Fundraising Management. He was appointed by Mayor Bloomberg to serve on the NYC Commission for Economic Opportunity. William is former board President of the Association of Fundraising Professionals, Greater New York Chapter. William received his MBA from Columbia Business School and his undergraduate degree from American University. 4 - CalPERS Diversity Forum - Making the Difference in Business and Finance

5) CalPERS Diversity Forum Inclusion - Key to Attracting and Retaining Talent Pamela Eibeck President, University of the Pacific, Executive Chair, Association of Independent California Colleges and Universities Dr. Pamela A. Eibeck became the 24th President of University of the Pacific on July 1, 2009. She is Pacific&rsquo;s sixth President since the University moved to Stockton in 1924, and the first woman to hold the office. Under her stewardship, the University is implementing a bold new strategic vision, Pacific 2020, through which Pacific will enhance its academic excellence and students&rsquo; success, and expand its presence in Sacramento and San Francisco. President Eibeck has also made connecting with the community a key priority with the Beyond Our Gates campaign. Eibeck&rsquo;s Presidency follows a distinguished career as a researcher, teacher, educational reformer, and university administrator. She received her bachelor&rsquo;s through doctoral degrees in mechanical engineering from Stanford University. She taught and earned tenure at the University of California at Berkeley, served as a professor and administrator at Northern Arizona University, and served as dean of the Edward E. Whitacre Jr. College of Engineering at Texas Tech. An expert in heat transfer, Eibeck conducted experimental research related to electronics cooling and thermal tiles used by NASA on the space shuttles. Her later work focused on engineering educational reform, including early use of multimedia in the classroom, curriculum development, and ways to attract young people and women to the profession. She has authored or co-authored nearly 50 articles and papers. Eibeck is married to William D. Jeffery, a law professor and a native of California. 5 - CalPERS Diversity Forum - Making the Difference in Business and Finance