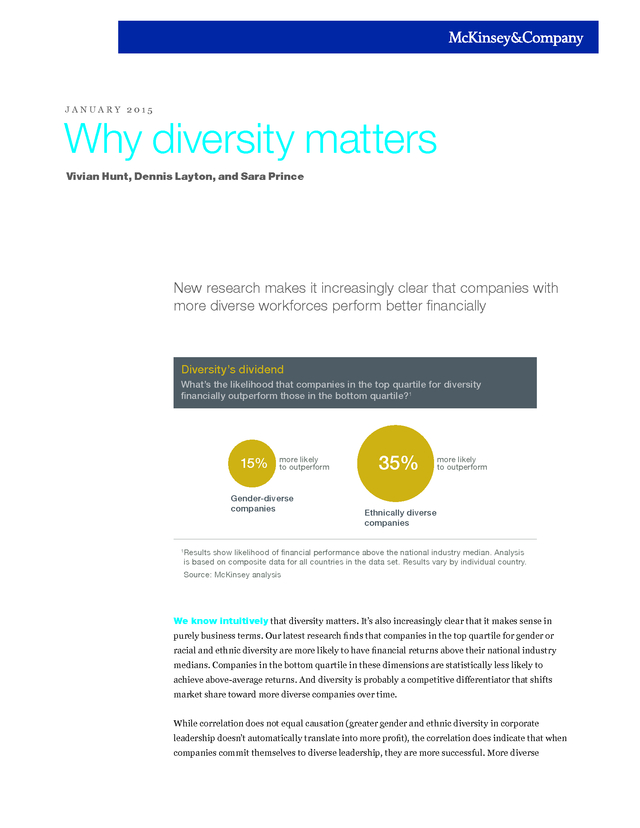 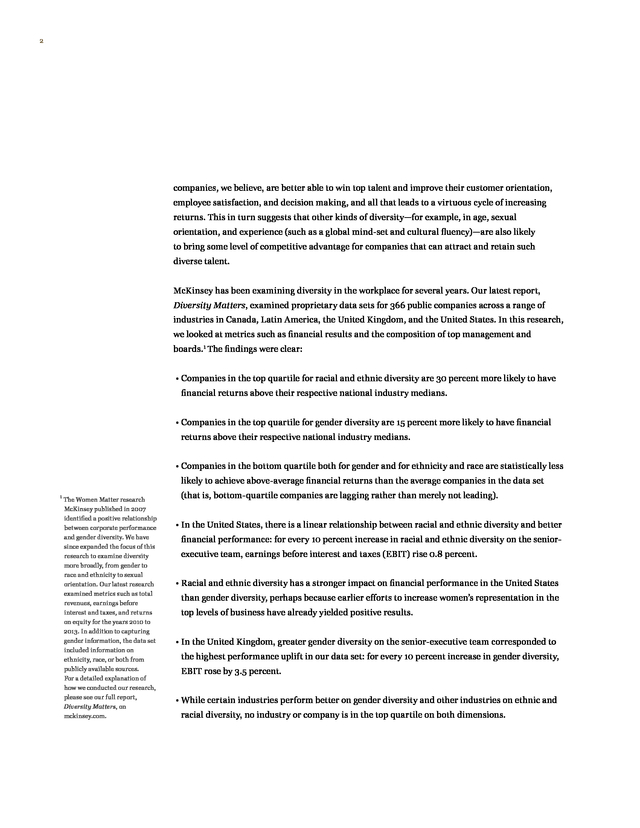 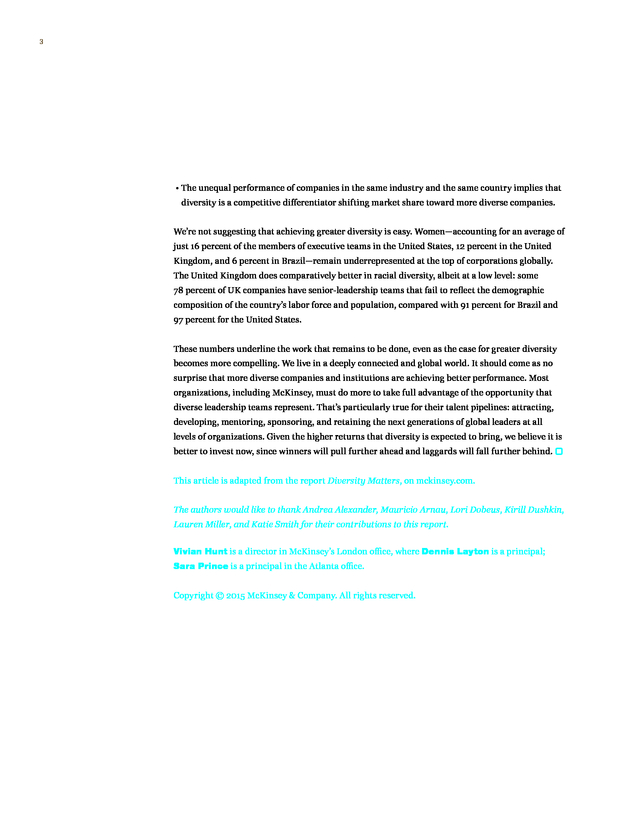 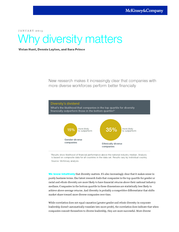 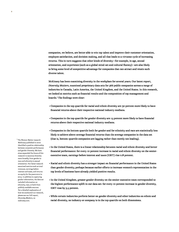 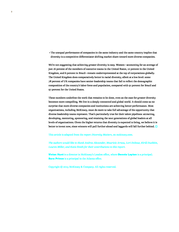 1
1 of 3
McKinsey & Company: Why Diversity Matters

1) JANUARY 2015 Why diversity matters Vivian Hunt, Dennis Layton, and Sara Prince New research makes it increasingly clear that companies with more diverse workforces perform better financially Diversity&rsquo;s dividend What&rsquo;s the likelihood that companies in the top quartile for diversity ï¬nancially outperform those in the bottom quartile?1 15% more likely to outperform Gender-diverse companies 1 35% more likely to outperform Ethnically diverse companies Results show likelihood of financial performance above the national industry median. Analysis is based on composite data for all countries in the data set. Results vary by individual country. Source: McKinsey analysis We know intuitively that diversity matters. It&rsquo;s also increasingly clear that it makes sense in purely business terms. Our latest research finds that companies in the top quartile for gender or racial and ethnic diversity are more likely to have financial returns above their national industry medians. Companies in the bottom quartile in these dimensions are statistically less likely to achieve above-average returns. And diversity is probably a competitive differentiator that shifts market share toward more diverse companies over time. While correlation does not equal causation (greater gender and ethnic diversity in corporate leadership doesn&rsquo;t automatically translate into more profit), the correlation does indicate that when companies commit themselves to diverse leadership, they are more successful. More diverse

2) 2 companies, we believe, are better able to win top talent and improve their customer orientation, employee satisfaction, and decision making, and all that leads to a virtuous cycle of increasing returns. This in turn suggests that other kinds of diversity&mdash;for example, in age, sexual orientation, and experience (such as a global mind-set and cultural fluency)&mdash;are also likely to bring some level of competitive advantage for companies that can attract and retain such diverse talent. McKinsey has been examining diversity in the workplace for several years. Our latest report, Diversity Matters, examined proprietary data sets for 366 public companies across a range of industries in Canada, Latin America, the United Kingdom, and the United States. In this research, we looked at metrics such as financial results and the composition of top management and boards.1 The findings were clear: &bull;  ompanies in the top quartile for racial and ethnic diversity are 30 percent more likely to have C financial returns above their respective national industry medians. &bull;  ompanies in the top quartile for gender diversity are 15 percent more likely to have financial C returns above their respective national industry medians. &bull;  ompanies in the bottom quartile both for gender and for ethnicity and race are statistically less C likely to achieve above-average financial returns than the average companies in the data set 1  The Women Matter research McKinsey published in 2007 identified a positive relationship between corporate performance and gender diversity. We have since expanded the focus of this research to examine diversity more broadly, from gender to race and ethnicity to sexual orientation. Our latest research examined metrics such as total revenues, earnings before interest and taxes, and returns on equity for the years 2010 to 2013. In addition to capturing gender information, the data set included information on ethnicity, race, or both from publicly available sources. For a detailed explanation of how we conducted our research, please see our full report, Diversity Matters, on mckinsey.com. (that is, bottom-quartile companies are lagging rather than merely not leading). &bull;  n the United States, there is a linear relationship between racial and ethnic diversity and better I financial performance: for every 10 percent increase in racial and ethnic diversity on the seniorexecutive team, earnings before interest and taxes (EBIT) rise 0.8 percent. &bull;  acial and ethnic diversity has a stronger impact on financial performance in the United States R than gender diversity, perhaps because earlier efforts to increase women&rsquo;s representation in the top levels of business have already yielded positive results. &bull;  n the United Kingdom, greater gender diversity on the senior-executive team corresponded to I the highest performance uplift in our data set: for every 10 percent increase in gender diversity, EBIT rose by 3.5 percent. &bull;  hile certain industries perform better on gender diversity and other industries on ethnic and W racial diversity, no industry or company is in the top quartile on both dimensions.

3) 3 &bull;  he unequal performance of companies in the same industry and the same country implies that T diversity is a competitive differentiator shifting market share toward more diverse companies. We&rsquo;re not suggesting that achieving greater diversity is easy. Women&mdash;accounting for an average of just 16 percent of the members of executive teams in the United States, 12 percent in the United Kingdom, and 6 percent in Brazil&mdash;remain underrepresented at the top of corporations globally. The United Kingdom does comparatively better in racial diversity, albeit at a low level: some 78 percent of UK companies have senior-leadership teams that fail to reflect the demographic composition of the country&rsquo;s labor force and population, compared with 91 percent for Brazil and 97 percent for the United States. These numbers underline the work that remains to be done, even as the case for greater diversity becomes more compelling. We live in a deeply connected and global world. It should come as no surprise that more diverse companies and institutions are achieving better performance. Most organizations, including McKinsey, must do more to take full advantage of the opportunity that diverse leadership teams represent. That&rsquo;s particularly true for their talent pipelines: attracting, developing, mentoring, sponsoring, and retaining the next generations of global leaders at all levels of organizations. Given the higher returns that diversity is expected to bring, we believe it is better to invest now, since winners will pull further ahead and laggards will fall further behind. This article is adapted from the report Diversity Matters, on mckinsey.com. The authors would like to thank Andrea Alexander, Mauricio Arnau, Lori Dobeus, Kirill Dushkin, Lauren Miller, and Katie Smith for their contributions to this report. Vivian Hunt is a director in McKinsey&rsquo;s London office, where Dennis Layton is a principal; Sara Prince is a principal in the Atlanta office. Copyright &copy; 2015 McKinsey &amp; Company. All rights reserved.