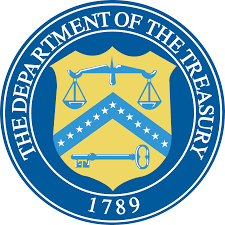 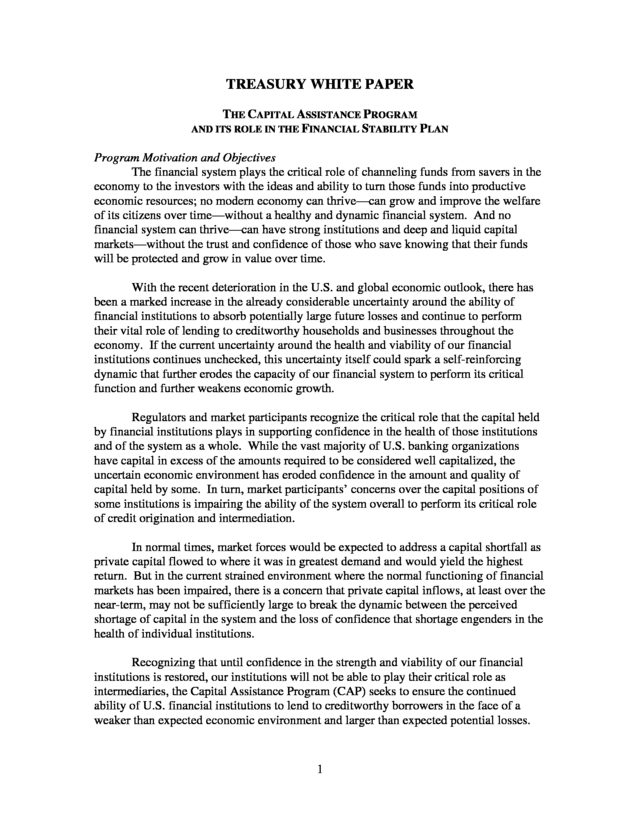 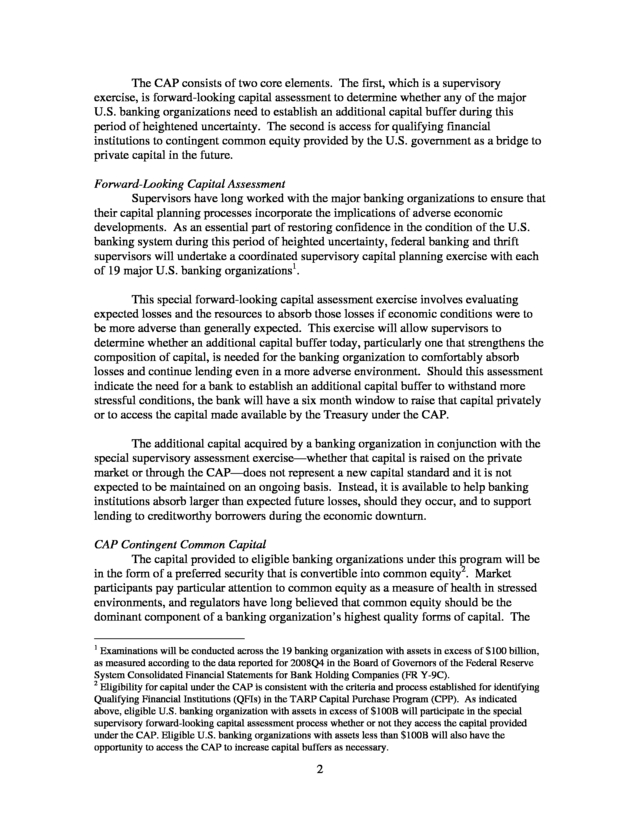 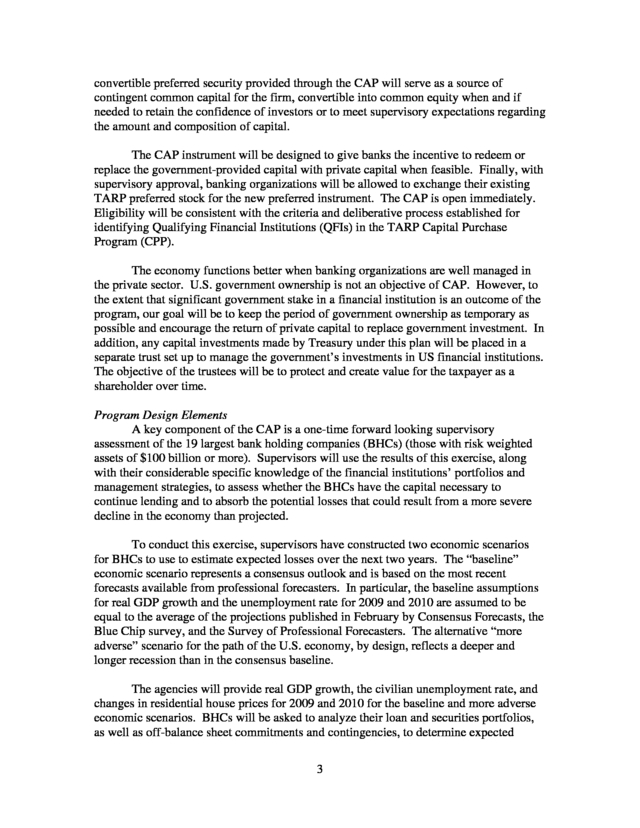 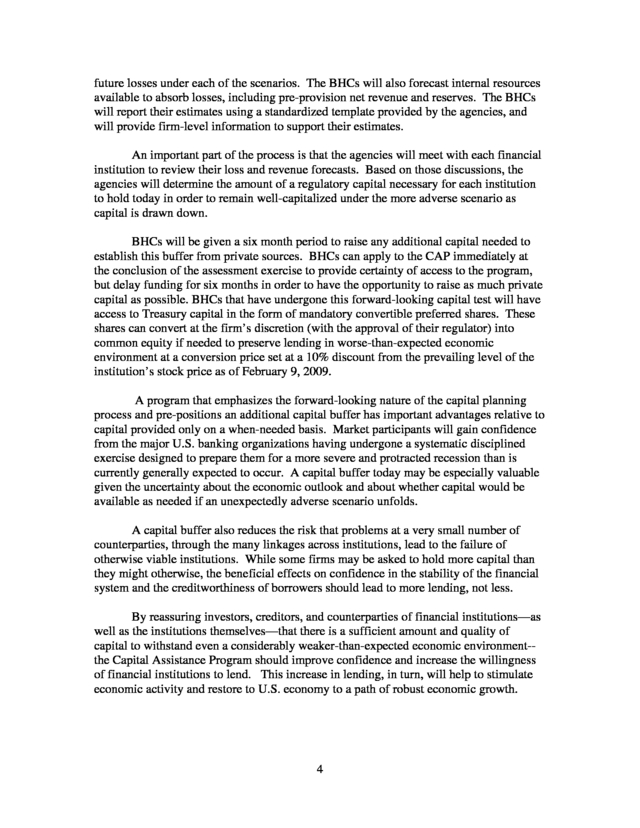 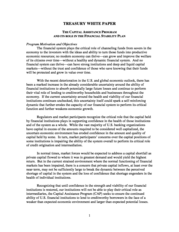 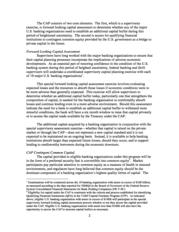 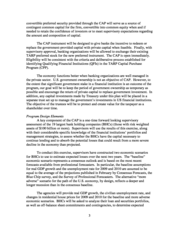 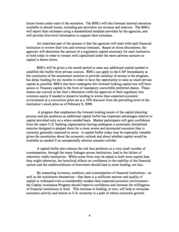 1) TREASURY WHITE PAPER THE CAPITAL ASSISTANCE PROGRAM AND ITS ROLE IN THE FINANCIAL STABILITY PLAN Program Motivation and Objectives The financial system plays the critical role of channeling funds from savers in the economy to the investors with the ideas and ability to turn those funds into productive economic resources; no modern economy can thrive&mdash;can grow and improve the welfare of its citizens over time&mdash;without a healthy and dynamic financial system. And no financial system can thrive&mdash;can have strong institutions and deep and liquid capital markets&mdash;without the trust and confidence of those who save knowing that their funds will be protected and grow in value over time. With the recent deterioration in the U.S. and global economic outlook, there has been a marked increase in the already considerable uncertainty around the ability of financial institutions to absorb potentially large future losses and continue to perform their vital role of lending to creditworthy households and businesses throughout the economy. If the current uncertainty around the health and viability of our financial institutions continues unchecked, this uncertainty itself could spark a self-reinforcing dynamic that further erodes the capacity of our financial system to perform its critical function and further weakens economic growth. Regulators and market participants recognize the critical role that the capital held by financial institutions plays in supporting confidence in the health of those institutions and of the system as a whole. While the vast majority of U.S. banking organizations have capital in excess of the amounts required to be considered well capitalized, the uncertain economic environment has eroded confidence in the amount and quality of capital held by some. In turn, market participants&rsquo; concerns over the capital positions of some institutions is impairing the ability of the system overall to perform its critical role of credit origination and intermediation. In normal times, market forces would be expected to address a capital shortfall as private capital flowed to where it was in greatest demand and would yield the highest return. But in the current strained environment where the normal functioning of financial markets has been impaired, there is a concern that private capital inflows, at least over the near-term, may not be sufficiently large to break the dynamic between the perceived shortage of capital in the system and the loss of confidence that shortage engenders in the health of individual institutions. Recognizing that until confidence in the strength and viability of our financial institutions is restored, our institutions will not be able to play their critical role as intermediaries, the Capital Assistance Program (CAP) seeks to ensure the continued ability of U.S. financial institutions to lend to creditworthy borrowers in the face of a weaker than expected economic environment and larger than expected potential losses. 1

2) The CAP consists of two core elements. The first, which is a supervisory exercise, is forward-looking capital assessment to determine whether any of the major U.S. banking organizations need to establish an additional capital buffer during this period of heightened uncertainty. The second is access for qualifying financial institutions to contingent common equity provided by the U.S. government as a bridge to private capital in the future. Forward-Looking Capital Assessment Supervisors have long worked with the major banking organizations to ensure that their capital planning processes incorporate the implications of adverse economic developments. As an essential part of restoring confidence in the condition of the U.S. banking system during this period of heighted uncertainty, federal banking and thrift supervisors will undertake a coordinated supervisory capital planning exercise with each of 19 major U.S. banking organizations1. This special forward-looking capital assessment exercise involves evaluating expected losses and the resources to absorb those losses if economic conditions were to be more adverse than generally expected. This exercise will allow supervisors to determine whether an additional capital buffer today, particularly one that strengthens the composition of capital, is needed for the banking organization to comfortably absorb losses and continue lending even in a more adverse environment. Should this assessment indicate the need for a bank to establish an additional capital buffer to withstand more stressful conditions, the bank will have a six month window to raise that capital privately or to access the capital made available by the Treasury under the CAP. The additional capital acquired by a banking organization in conjunction with the special supervisory assessment exercise&mdash;whether that capital is raised on the private market or through the CAP&mdash;does not represent a new capital standard and it is not expected to be maintained on an ongoing basis. Instead, it is available to help banking institutions absorb larger than expected future losses, should they occur, and to support lending to creditworthy borrowers during the economic downturn. CAP Contingent Common Capital The capital provided to eligible banking organizations under this program will be in the form of a preferred security that is convertible into common equity2. Market participants pay particular attention to common equity as a measure of health in stressed environments, and regulators have long believed that common equity should be the dominant component of a banking organization&rsquo;s highest quality forms of capital. The 1 Examinations will be conducted across the 19 banking organization with assets in excess of $100 billion, as measured according to the data reported for 2008Q4 in the Board of Governors of the Federal Reserve System Consolidated Financial Statements for Bank Holding Companies (FR Y-9C). 2 Eligibility for capital under the CAP is consistent with the criteria and process established for identifying Qualifying Financial Institutions (QFIs) in the TARP Capital Purchase Program (CPP). As indicated above, eligible U.S. banking organization with assets in excess of $100B will participate in the special supervisory forward-looking capital assessment process whether or not they access the capital provided under the CAP. Eligible U.S. banking organizations with assets less than $100B will also have the opportunity to access the CAP to increase capital buffers as necessary. 2

3) convertible preferred security provided through the CAP will serve as a source of contingent common capital for the firm, convertible into common equity when and if needed to retain the confidence of investors or to meet supervisory expectations regarding the amount and composition of capital. The CAP instrument will be designed to give banks the incentive to redeem or replace the government-provided capital with private capital when feasible. Finally, with supervisory approval, banking organizations will be allowed to exchange their existing TARP preferred stock for the new preferred instrument. The CAP is open immediately. Eligibility will be consistent with the criteria and deliberative process established for identifying Qualifying Financial Institutions (QFIs) in the TARP Capital Purchase Program (CPP). The economy functions better when banking organizations are well managed in the private sector. U.S. government ownership is not an objective of CAP. However, to the extent that significant government stake in a financial institution is an outcome of the program, our goal will be to keep the period of government ownership as temporary as possible and encourage the return of private capital to replace government investment. In addition, any capital investments made by Treasury under this plan will be placed in a separate trust set up to manage the government&rsquo;s investments in US financial institutions. The objective of the trustees will be to protect and create value for the taxpayer as a shareholder over time. Program Design Elements A key component of the CAP is a one-time forward looking supervisory assessment of the 19 largest bank holding companies (BHCs) (those with risk weighted assets of $100 billion or more). Supervisors will use the results of this exercise, along with their considerable specific knowledge of the financial institutions&rsquo; portfolios and management strategies, to assess whether the BHCs have the capital necessary to continue lending and to absorb the potential losses that could result from a more severe decline in the economy than projected. To conduct this exercise, supervisors have constructed two economic scenarios for BHCs to use to estimate expected losses over the next two years. The &ldquo;baseline&rdquo; economic scenario represents a consensus outlook and is based on the most recent forecasts available from professional forecasters. In particular, the baseline assumptions for real GDP growth and the unemployment rate for 2009 and 2010 are assumed to be equal to the average of the projections published in February by Consensus Forecasts, the Blue Chip survey, and the Survey of Professional Forecasters. The alternative &ldquo;more adverse&rdquo; scenario for the path of the U.S. economy, by design, reflects a deeper and longer recession than in the consensus baseline. The agencies will provide real GDP growth, the civilian unemployment rate, and changes in residential house prices for 2009 and 2010 for the baseline and more adverse economic scenarios. BHCs will be asked to analyze their loan and securities portfolios, as well as off-balance sheet commitments and contingencies, to determine expected 3

4) future losses under each of the scenarios. The BHCs will also forecast internal resources available to absorb losses, including pre-provision net revenue and reserves. The BHCs will report their estimates using a standardized template provided by the agencies, and will provide firm-level information to support their estimates. An important part of the process is that the agencies will meet with each financial institution to review their loss and revenue forecasts. Based on those discussions, the agencies will determine the amount of a regulatory capital necessary for each institution to hold today in order to remain well-capitalized under the more adverse scenario as capital is drawn down. BHCs will be given a six month period to raise any additional capital needed to establish this buffer from private sources. BHCs can apply to the CAP immediately at the conclusion of the assessment exercise to provide certainty of access to the program, but delay funding for six months in order to have the opportunity to raise as much private capital as possible. BHCs that have undergone this forward-looking capital test will have access to Treasury capital in the form of mandatory convertible preferred shares. These shares can convert at the firm&rsquo;s discretion (with the approval of their regulator) into common equity if needed to preserve lending in worse-than-expected economic environment at a conversion price set at a 10% discount from the prevailing level of the institution&rsquo;s stock price as of February 9, 2009. A program that emphasizes the forward-looking nature of the capital planning process and pre-positions an additional capital buffer has important advantages relative to capital provided only on a when-needed basis. Market participants will gain confidence from the major U.S. banking organizations having undergone a systematic disciplined exercise designed to prepare them for a more severe and protracted recession than is currently generally expected to occur. A capital buffer today may be especially valuable given the uncertainty about the economic outlook and about whether capital would be available as needed if an unexpectedly adverse scenario unfolds. A capital buffer also reduces the risk that problems at a very small number of counterparties, through the many linkages across institutions, lead to the failure of otherwise viable institutions. While some firms may be asked to hold more capital than they might otherwise, the beneficial effects on confidence in the stability of the financial system and the creditworthiness of borrowers should lead to more lending, not less. By reassuring investors, creditors, and counterparties of financial institutions&mdash;as well as the institutions themselves&mdash;that there is a sufficient amount and quality of capital to withstand even a considerably weaker-than-expected economic environment-the Capital Assistance Program should improve confidence and increase the willingness of financial institutions to lend. This increase in lending, in turn, will help to stimulate economic activity and restore to U.S. economy to a path of robust economic growth. 4