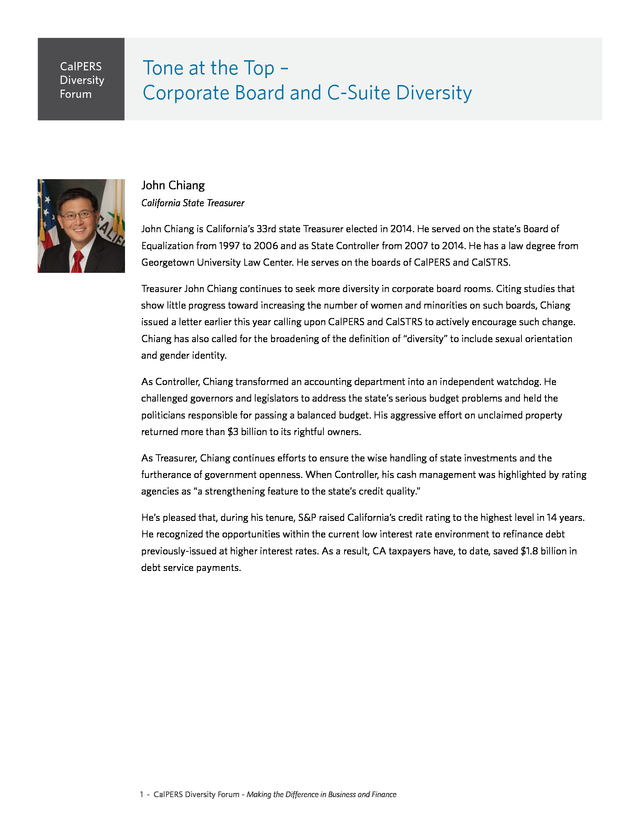 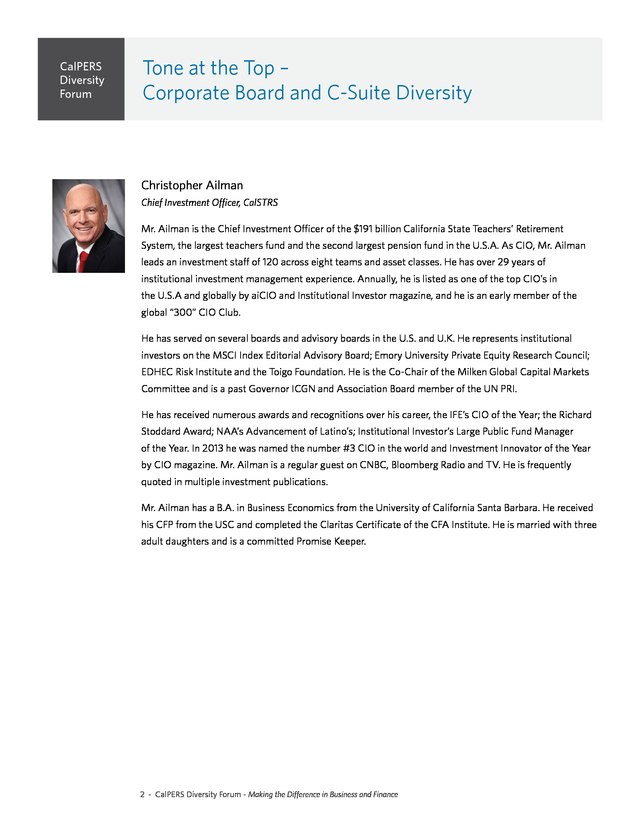 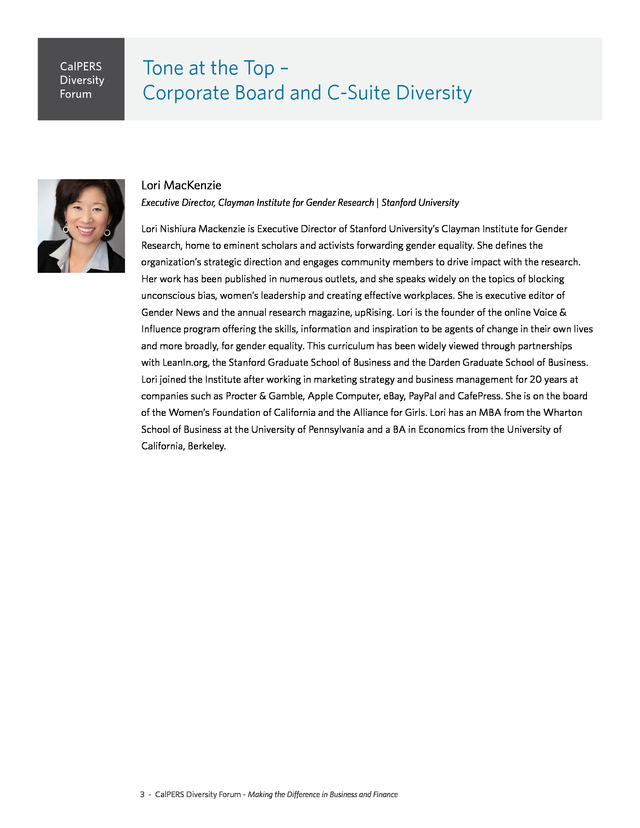 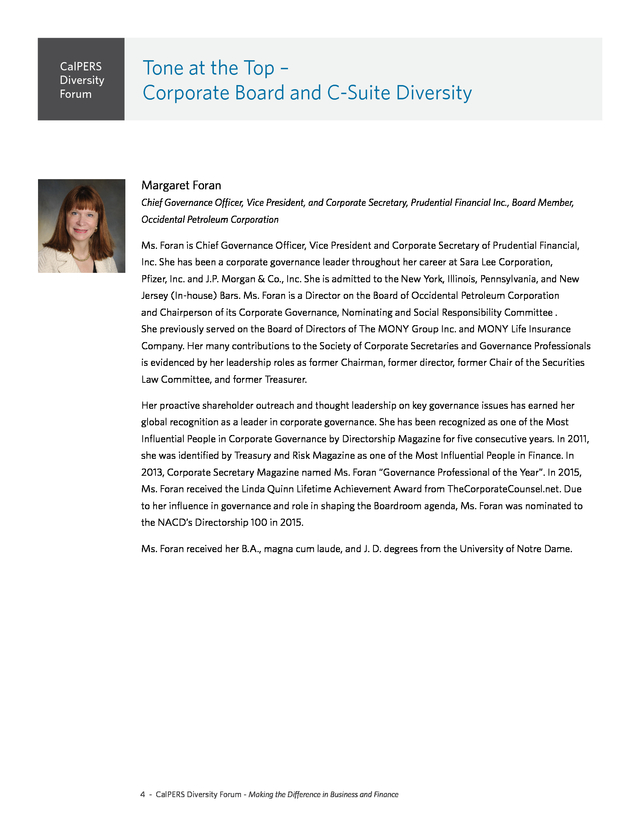 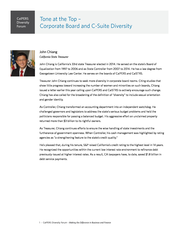 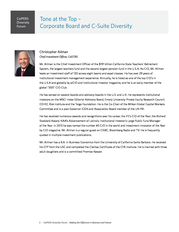 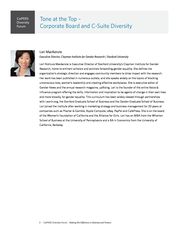 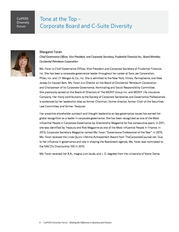 1) CalPERS Diversity Forum Tone at the Top &ndash; Corporate Board and C-Suite Diversity John Chiang California State Treasurer John Chiang is California&rsquo;s 33rd state Treasurer elected in 2014. He served on the state&rsquo;s Board of Equalization from 1997 to 2006 and as State Controller from 2007 to 2014. He has a law degree from Georgetown University Law Center. He serves on the boards of CalPERS and CalSTRS. Treasurer John Chiang continues to seek more diversity in corporate board rooms. Citing studies that show little progress toward increasing the number of women and minorities on such boards, Chiang issued a letter earlier this year calling upon CalPERS and CalSTRS to actively encourage such change. Chiang has also called for the broadening of the definition of &ldquo;diversity&rdquo; to include sexual orientation and gender identity. As Controller, Chiang transformed an accounting department into an independent watchdog. He challenged governors and legislators to address the state&rsquo;s serious budget problems and held the politicians responsible for passing a balanced budget. His aggressive effort on unclaimed property returned more than $3 billion to its rightful owners. As Treasurer, Chiang continues efforts to ensure the wise handling of state investments and the furtherance of government openness. When Controller, his cash management was highlighted by rating agencies as &ldquo;a strengthening feature to the state&rsquo;s credit quality.&rdquo; He&rsquo;s pleased that, during his tenure, S&amp;P raised California&rsquo;s credit rating to the highest level in 14 years. He recognized the opportunities within the current low interest rate environment to refinance debt previously-issued at higher interest rates. As a result, CA taxpayers have, to date, saved $1.8 billion in debt service payments. 1 - CalPERS Diversity Forum - Making the Difference in Business and Finance

2) CalPERS Diversity Forum Tone at the Top &ndash; Corporate Board and C-Suite Diversity Christopher Ailman Chief Investment Officer, CalSTRS Mr. Ailman is the Chief Investment Officer of the $191 billion California State Teachers&rsquo; Retirement System, the largest teachers fund and the second largest pension fund in the U.S.A. As CIO, Mr. Ailman leads an investment staff of 120 across eight teams and asset classes. He has over 29 years of institutional investment management experience. Annually, he is listed as one of the top CIO&rsquo;s in the U.S.A and globally by aiCIO and Institutional Investor magazine, and he is an early member of the global &ldquo;300&rdquo; CIO Club. He has served on several boards and advisory boards in the U.S. and U.K. He represents institutional investors on the MSCI Index Editorial Advisory Board; Emory University Private Equity Research Council; EDHEC Risk Institute and the Toigo Foundation. He is the Co-Chair of the Milken Global Capital Markets Committee and is a past Governor ICGN and Association Board member of the UN PRI. He has received numerous awards and recognitions over his career, the IFE&rsquo;s CIO of the Year; the Richard Stoddard Award; NAA&rsquo;s Advancement of Latino&rsquo;s; Institutional Investor&rsquo;s Large Public Fund Manager of the Year. In 2013 he was named the number #3 CIO in the world and Investment Innovator of the Year by CIO magazine. Mr. Ailman is a regular guest on CNBC, Bloomberg Radio and TV. He is frequently quoted in multiple investment publications. Mr. Ailman has a B.A. in Business Economics from the University of California Santa Barbara. He received his CFP from the USC and completed the Claritas Certificate of the CFA Institute. He is married with three adult daughters and is a committed Promise Keeper. 2 - CalPERS Diversity Forum - Making the Difference in Business and Finance

3) CalPERS Diversity Forum Tone at the Top &ndash; Corporate Board and C-Suite Diversity Lori MacKenzie Executive Director, Clayman Institute for Gender Research | Stanford University Lori Nishiura Mackenzie is Executive Director of Stanford University&rsquo;s Clayman Institute for Gender Research, home to eminent scholars and activists forwarding gender equality. She defines the organization&rsquo;s strategic direction and engages community members to drive impact with the research. Her work has been published in numerous outlets, and she speaks widely on the topics of blocking unconscious bias, women&rsquo;s leadership and creating effective workplaces. She is executive editor of Gender News and the annual research magazine, upRising. Lori is the founder of the online Voice &amp; Influence program offering the skills, information and inspiration to be agents of change in their own lives and more broadly, for gender equality. This curriculum has been widely viewed through partnerships with LeanIn.org, the Stanford Graduate School of Business and the Darden Graduate School of Business. Lori joined the Institute after working in marketing strategy and business management for 20 years at companies such as Procter &amp; Gamble, Apple Computer, eBay, PayPal and CafePress. She is on the board of the Women&rsquo;s Foundation of California and the Alliance for Girls. Lori has an MBA from the Wharton School of Business at the University of Pennsylvania and a BA in Economics from the University of California, Berkeley. 3 - CalPERS Diversity Forum - Making the Difference in Business and Finance

4) CalPERS Diversity Forum Tone at the Top &ndash; Corporate Board and C-Suite Diversity Margaret Foran Chief Governance Officer, Vice President, and Corporate Secretary, Prudential Financial Inc., Board Member, Occidental Petroleum Corporation Ms. Foran is Chief Governance Officer, Vice President and Corporate Secretary of Prudential Financial, Inc. She has been a corporate governance leader throughout her career at Sara Lee Corporation, Pfizer, Inc. and J.P. Morgan &amp; Co., Inc. She is admitted to the New York, Illinois, Pennsylvania, and New Jersey (In-house) Bars. Ms. Foran is a Director on the Board of Occidental Petroleum Corporation and Chairperson of its Corporate Governance, Nominating and Social Responsibility Committee . She previously served on the Board of Directors of The MONY Group Inc. and MONY Life Insurance Company. Her many contributions to the Society of Corporate Secretaries and Governance Professionals is evidenced by her leadership roles as former Chairman, former director, former Chair of the Securities Law Committee, and former Treasurer. Her proactive shareholder outreach and thought leadership on key governance issues has earned her global recognition as a leader in corporate governance. She has been recognized as one of the Most Influential People in Corporate Governance by Directorship Magazine for five consecutive years. In 2011, she was identified by Treasury and Risk Magazine as one of the Most Influential People in Finance. In 2013, Corporate Secretary Magazine named Ms. Foran &ldquo;Governance Professional of the Year&rdquo;. In 2015, Ms. Foran received the Linda Quinn Lifetime Achievement Award from TheCorporateCounsel.net. Due to her influence in governance and role in shaping the Boardroom agenda, Ms. Foran was nominated to the NACD&rsquo;s Directorship 100 in 2015. Ms. Foran received her B.A., magna cum laude, and J. D. degrees from the University of Notre Dame. 4 - CalPERS Diversity Forum - Making the Difference in Business and Finance